How much "Russian money" have Russian oligarchs injected into the UK's economy and contributed to UK politicians?

Rigby: And on the issue of how the west has acted to Putin, I want to ask you a bit about the relationship between the UK and Russia. And about Oligarchs and money - Russian money in London.

In the UK for years, you were monitoring Russia and the misdeeds of its spies like murdering people in the UK. And yet you also saw politicians and businessmen; they'd go into parties and holidaying with oligarchs. Do you think that the establishment here let themselves get seduced?

Steele: Absolutely. I think there were two things going on there. One is an element of naivety, because many of the Russians who come to London are very urbane, very convincing, very sort-of westernized. They don't represent the "real Russia" if you like. There is a dark side to Russia which not many people understand. Sadly I've been studying it for the last 20 years.

But I also think in addition to that, Russian money -- a wall of money that hit London; it wasn't just Russian but it was Russian money first I think -- sort-of set up a lobby, a group of interests who serviced this elite, who... the lawyers, the estate agents, the PR firms, and so on. And it became a pretty important part of our economy. And I suspect, also in terms of investment and so on, particularly after Brexit and what have you when we were looking for other forms of investment in the country.

This golden visa scheme which is now so controversial and in retrospect was such a bad mistake, grows out of that problem.

and in response to Rigby's questions about Evgeny Lebedev being "nominated for a life peerage by UK prime minister Boris Johnson" and and about other prominent Russian business people operating in London:

Steele: ...this is such a controversial appointment, and the story out there is that it was against the advice of the security services, so I think it's a pretty exceptional case. And there was a debate in Parliament the other day and I think probably the outcome of that should be more transparency.

Rigby: You have some experience, would you think that that has credibility; that the security services would have been anxious about this appointment?

Steele: I think any sort-of family member of a former KGB officer or a KGB agent -- and actually Lebedev is not the only one, there are quite a few former KGB officers who are quite prominent in Britain and in business here who need to be very closely looked at. And certainly it's surprising to me that the've managed to operate in the country in the way that they have.

Pie: I don't really know what to say. For the first time in my career, there are no words or explitives that can do this situation justice.

and that not being very likely, he goes on to say

Here in the UK, we don't have quite the same problem. Only five percent of our gas comes from Russia. Here we're reliant on something far more precious -- Russian money. 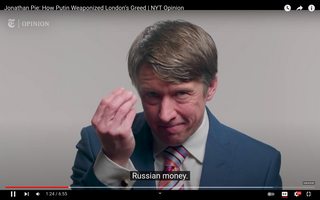 For 20 years, Putin has been using illicit money to fund an oligarchy of billionaires to keep his corrupt regime in power. And for 20 years, those Kremlin-approved oligarchs have been coming here to "invest" their ill-gotten gains via a loophole that allows people to buy property in the UK anonymously.

[...] Welcome to Londongrad, Moscoow-on-Thaimes. Eighty-seven thousand homes in Britain were bought through off-shore companies by anonymous millionaires. At least 1.5 billion1 pounds' worth of those are owned by Russians with direct links to the Kremlin.

[...] We have let it happen for years, because it's because it's how the UK makes its money. It's the only industry we have left.

[...] Speaking of Boris Johnson, he's up to his (ears) in it as well. Since he became prime minister, Tories have accepted 2 million pounds in Russian donations. I know in American terms, 2 million is the political donation equivalent of tipping the bellboy, but here we're much more strict. We put a limit on the amount of dirty, illegal, kleptocratic money that our main political parties can take, which has an upside for Putin because it means British politicians are incredibly cheap to buy.

How much "Russian money" have Russian oligarchs injected into the UK's economy and contributed to UK politicians? Pie offers some bits and pieces but at this point in time surely some authoritative source has compiled at least a rough enumeration.

It's very difficult to put an absolute figure on this. Firstly, it's important to differentiate between Russian investment in the UK & Russian donations to politicians. In the first case, Walker's character appears to be referencing a February 2022 report by anti-corruption organisation Transparency International, which presents the £1.5 billion figure, based on figures from June 2021:

£1.5 billion worth of property was bought by Russians accused of corruption or links to the Kremlin.

Analysis of how this £1.5 billion is owned reveals £830 million worth (55% by value) is held by companies in Britain’s Overseas Territories and Crown Dependencies. The secrecy provided by these offshore financial centres is often used by those seeking to hide their ownership of assets.

It's not clear that this represents the whole picture, however. The House of Commons Library's April 1st 2022 report, Countering Russian influence in the UK, notes that putting an exact figure on the amount of Russian investment in the UK is impossible due to "the difficulty in tracing the beneficial (ultimate) owners of some assets", but estimates that it totals "tens of billions". Vladimir Ashurkov of the Anti-Corruption Foundation told the Foreign Affairs Select Committee in 2018 (Question 98) that "there have been some estimates of money coming from Russia to Britain over the last 20 years—100 billion is probably a good number. Most of that money is legitimate; I think only a fraction of that is the proceeds of corruption and crime."

This is borne out by the number of investor visas issued to Russian applicants - the Tier 1 investment visa granted permission to stay in the UK for up to 5 years in return for a minimum investment of £2 million until it was ended in February 2022. The Commons Library report gives a figure of over 2,500 of these visas having been issued to Russian applicants, representing at least £5 billion of investment. The report by the Intelligence and Security Committee on Russia gave the following explanation for the Government's promotion of the scheme:

The UK welcomed Russian money, and few questions – if any – were asked about the provenance of this considerable wealth. It appears that the UK Government at the time held the belief (more perhaps in hope than expectation) that developing links with major Russian companies would promote good governance by encouraging ethical and transparent practices, and the adoption of a law-based commercial environment.

As far as direct donations to politicians and political parties go, however, it's possible to be a little more precise. The figure that has been reported in the last few weeks, ~£2.3 million in donations to the Conservative Party since Boris Johnson became leader, is based on calculations made on figures published by the Electoral Commission - predominantly donations made by Lubov Chernukhin, Alexander Temerko, and Mohamed Amersi, of £700,000, £357,000 and £258,000 respectively. On the other hand, the Labour party has received more than £1 million from financier Martin Taylor, whose Nevsky Fund has major investments in Russia.

Under UK law, all donations must be reported to the Electoral Commission and all donations to candidates over the sum of £50 must come from an individual on the UK electoral register - essentially, if you can vote for a party, you are eligible to donate to it. The argument that has been put forward by the recipients of these donations is that if a voter is on the electoral register, they can hardly be described as a 'Russian oligarch'. It's almost impossible, however, to definitively determine the ultimate source of money donated, even if the last stop is a permissible source. The result is often spurious but eye-catching headline figures obtained by journalists scouring the register for donations made by British individuals with Russian-sounding names, and it remains incredibly difficult to accurately trace the initial source of any donated wealth.

7
Is the UK taking any steps towards better regulation of foreign investments after Russia started the invasion of Ukraine?

27
If the Russian regime is so popular, why does it need to invest into limiting freedom of expression?
4
Can the UK afford to extend sanctions to financial ones as a response to latest ex-spy's murder?
3
Why did the UK have lax checks on the source of the money coming into the country?
5
Can the US and EU sanction the oligarchs supporting Putin in order to deter him from starting a war in Ukraine?
5
How are peers supposed to be selected?
7
Is the UK taking any steps towards better regulation of foreign investments after Russia started the invasion of Ukraine?
7
Statements on reasons to vote against US H. R. 6930, a bill to confiscate assets from sanctioned Russian oligarchs & use the funds to support Ukraine