"motion to reconsider is considered made and laid upon the table" & "Madam president... I note the absence of a quorum" What do these mean? Why funny?

In CNN's April 8, 2022 Applause erupts in Senate chamber after Brown Jackson is confirmed there is this little vignette between US Vice President Kamala Harris and the Senate Majority Leader Chuck Shumer that seems to take place after some applause erupts and so I'm guessing is more formal procedure than anything else, but I'm clueless what these words mean:

Harris: Under the previous order, the motion to reconsider is considered made and laid upon the table, and the president will immediately be notified of the Senate's action.

Schumer: Madam president, very happily, I note the absence of a quorum. 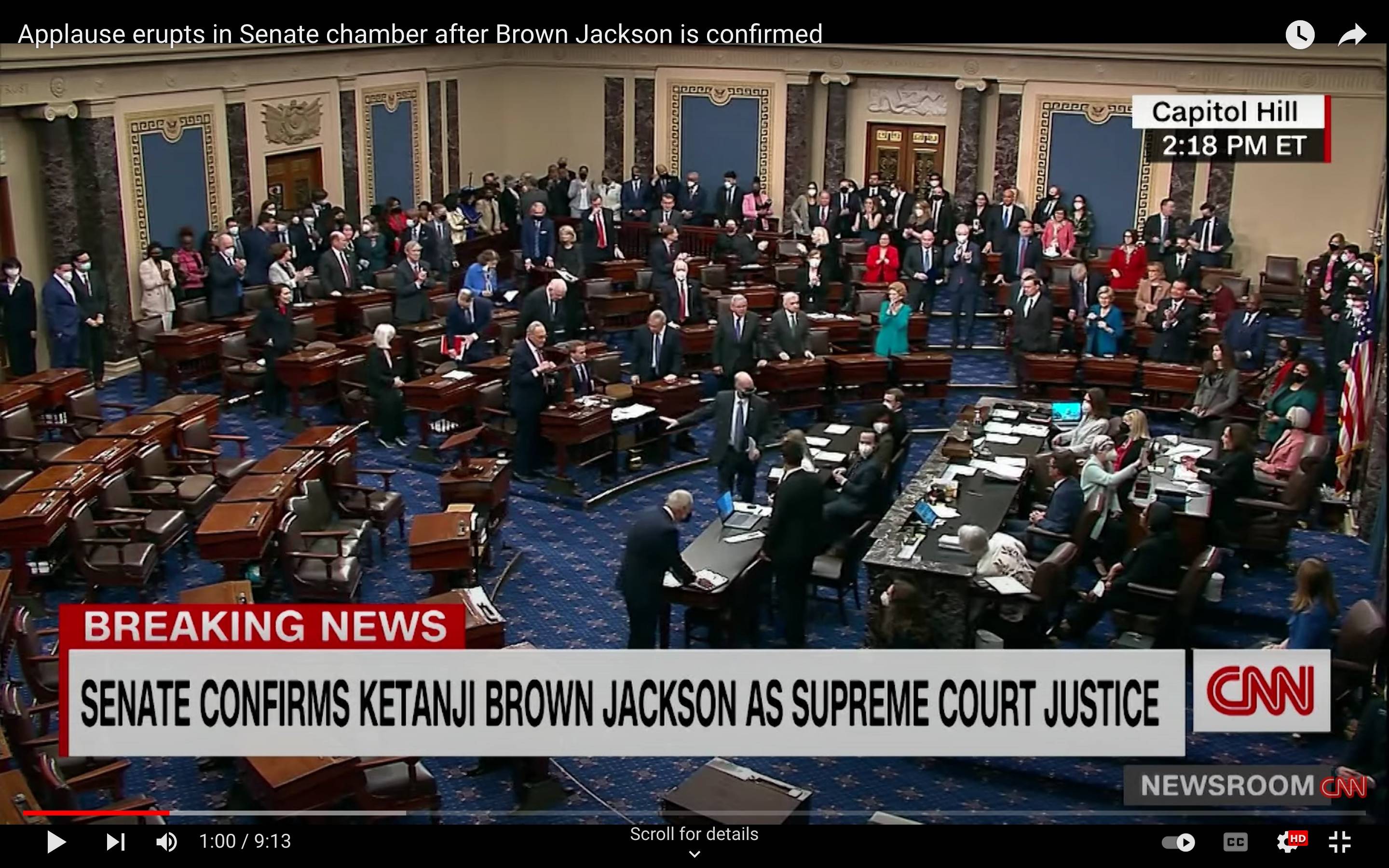 The joke isn't "I note the absence of a quorum." The joke is that he does so "very happily." As noted in the comments, in addition to closing Senate business for the day - the close of business on this Thursday in particular begins the Senate's two-week Easter break; meaning many of the Senators still present are about to go on vacation.

This is parliamentary procedure for, roughly, "Oh thank God, we can go home now."

To further explain the "motion to reconsider" verbiage, here's rule XIII.1 of the Senate Rules:

When a question has been decided by the Senate, any Senator voting with the prevailing side or who has not voted may, on the same day or on either of the next two days of actual session thereafter, move a reconsideration; and if the Senate shall refuse to reconsider such a motion entered, or if such a motion is withdrawn by leave of the Senate, or if upon reconsideration the Senate shall affirm its first decision, no further motion to reconsider shall be in order unless by unanimous consent. Every motion to reconsider shall be decided by a majority vote, and may be laid on the table without affecting the question in reference to which the same is made, which shall be a final disposition of the motion.

This rather verbose rule can be loosely paraphrased as follows:

The existing answers describe quorum calls in theory, but that's not how they generally work in the US Senate in practice (and not how it worked in the clip you asked about). The Senate uses quorum calls mostly as a way to pause proceedings, and the calls aren't meant to finish.

In the schedule of a deliberative assembly, there's always something that's supposed to be happening. Someone should be speaking on the subject of debate, or a motion or vote should be happening, or the chair should be moving on to the next item on the agenda. There's no agenda item for "mill around." Quorum calls fill that gap in the Senate. The clerk has to do a roll call, and during the roll call the senators can basically do whatever they want. In practice, clerks know this and so do the roll call pretty slowly. When the Senate wants to unpause, someone moves to withdraw the quorum call by unanimous consent and they can immediately get back to business.

On April 7, this is what that quorum call was about. Per the Congressional Record, the proceedings went like this:

Mr. SCHUMER. Madam President, very happily, I suggest the absence of a quorum.
The VICE PRESIDENT. The clerk will call the roll.
The senior assistant legislative clerk proceeded to call the roll.
Mr. SCHATZ. Mr. President, I ask unanimous consent that the order for the quorum call be rescinded.
The PRESIDING OFFICER (Mr. VAN HOLLEN). Without objection, it is so ordered.

Debate then continued on another nomination. The Senate didn't all go home, and the quorum call never decided whether or not a quorum was present. What it did was let the senators wander around chatting until they were ready to keep moving along the agenda.

The Congressional Research Service has a nice overview of the process.

Not the answer you're looking for? Browse other questions tagged united-states senate senate-rules procedure .

17
How unusual is a Vice President presiding over their own replacement in the Senate?