Is the abortion debate as divisive outside the US as it is inside?

In the United States, abortion is a highly polarizing issue:

Outside of the United States, I'm aware that it is an issue - particularly in Catholic countries - but I'm not really clear on how important it is to voters. How would one characterize the level of debate in:

In very general terms, abortion is not a "top of the mind" issue for voters in Europe. It's certainly a contentious social issue, as is everywhere, and different countries follow different approaches, but other than very specific examples it's not a frontline issue in European politics.

I might be stating the obvious here, but abortion laws are not uniform in Europe or the European Union. That said, with the exception of Ireland and Malta, you can assume a "available on request" approach with a minimum gestational limit of 12 weeks in the EU and most non EU countries, that is (broadly) similar to the US approach. BBC News has a very interesting map of Europe's abortion laws that gives a quick overview of related national regulations:

While the above map might show a somewhat uniform approach, at least in the core countries of the EU, it doesn't really say much about the population's social acceptance of abortion, other than the fact that at some point in the past it was high enough for regulators to legalize the practice.

Havas Worldwide (then Euro RSCG) commissioned a study on "European values" in 2005 that included the question:

If a woman doesn't want children, she should be able to have an abortion

The results of the study showed varying support for abortion, with the exception of Poland1, the only country where the (slim) majority answered "total no": 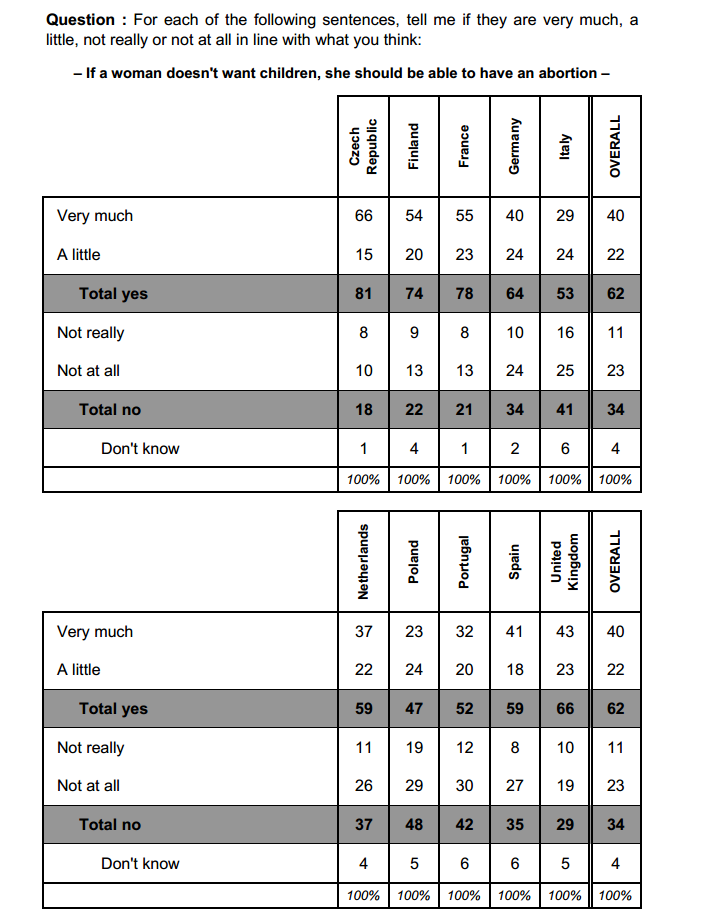 This is just one study, but it includes the more populous countries and shows that public opinion is more or less on par with established policies and regulations.

Ireland is the notable exception when it comes to abortion and politics, the Eight Amendment of the Constitution of Ireland (7 October 1983) introduced a constitutional prohibition of abortion:

The ban was loosened up a bit by the Thirteenth and the Fourteenth Amendments, however the issue remains controversial in Ireland.

Unfortunately, the lack of clarity on Ireland's abortion regulations identified by the ECtHR was put to the test in October 2012, with tragic results:

Savita Halappanavar, who was 17 weeks pregnant, died of septicaemia a week after presenting with back pain on 21 October at University hospital in Galway, where she was found to be miscarrying.

After the 31-year-old dentist was told that she was miscarrying, her husband reportedly said that she had asked for a medical termination a number of times over a three day period, during which she was in severe pain.

But he said these requests were denied because a foetal heartbeat was still present and they were told at one point: "This is a Catholic country."

Ms. Halappanavar's death re-started the abortion debate in Ireland, and to a lesser extend in Europe, and currently the majority opinion seems to be in favour of drastic reforms in the country's abortion policies that would bring Ireland closer to the rest of Europe when it comes to women's access to abortion.

In conclusion and returning to your core question, I can't imagine the issue becoming as divisive as in the US even if public opinion was largely against abortions, at least not in the near future. I tried to get a better feeling of the state of the debate in the US, and I was both horrified and surprised when I stumbled upon the anti-abortion violence article on Wikipedia. If this is the level of tension you had in mind, then no, Europe is nowhere near that level of craziness when it comes to issues with religious overtones.

1 I'll venture a guess and say that Poles at the time were more open to the Catholic Church's view on the issue, given that the then Pope, John Paul II, was Polish.

Having lived in New Zealand, the debate is much different there, as it is in Australia, and much of Western Europe.

Varying forms of Universal Healthcare exist, from Switzerland's health insurance system, to a more public system like the UK NHS. To make some brief examples.

Obtaining an abortion is usually dependent on seeing a doctor, and getting their approval for the procedure, based on whether it is medically safe. There is a time period set by the government, after which point, you can't have an abortion (unless having the child poses a health risk to the mother), and if you don't want the child after birth it goes into state care.

So when I say that the debate is different, it is often related to having public hospitals, and non-religious institution based healthcare, and the time limit in which you can get an abortion. While there may be a religious fringe, the focus of most religious organizations would be on convincing people to not go through with an abortion, or on reducing the time in which someone can get one.

Contrast this with the US, where the debate is not only a heavy focus on the time limit, but also on access to abortion itself, with many politicians seeking to enact, or enacting laws and measures that limit the number of abortion clinics, and restrict abortion to instances of rape or health risk to the mother.

If recent protests in South America are an indication, then abortion is still a charged political issue there.

Not the answer you're looking for? Browse other questions tagged international abortion .

13
What exactly did Donald Trump say about abortion?
16
Do feminists oppose sex-selective abortion?
13
Rationale for including incest as common abortion exception in addition to rape and health
4
What countries in the world have legalized both abortion and cannabis?
6
Why does Singapore criminalize abortion for foreigners?