How did the alleged Chinese debt trap cause the economic crisis in Sri Lanka?

Sri Lanka is facing the biggest economic crisis since its independence. Its policy was wrong in some cases:

etc. Now, they have few options:

Even if there was a debt trap, the country may not lose sovereignty to the credit line provider.

How does the Chinese debt trap work here for the economic crisis as many countries are in debt to China and they did not have much economic crisis except Pakistan and China?

The causes of the current economic crisis in Sri Lanka have more to do with other bad decisions by their government, including:

The government made a slew of policy decisions which resulted in macroeconomic imbalances on all fronts and this exacerbated the economic crisis, says Dr. W.A Wijewardena, former deputy governor of the Central Bank of Sri Lanka. These mistakes range from the tax cuts to poorly thought out borrowing to selling forex reserves to prop up the exchange rate with the dollar to an overly ambitious shift to organic farming which caused a significant drop in agricultural output.

Although the Chinese reluctance to discuss debt restructuring with Sri Lanka may have added to the current problems (they apparently asked in January, but have yet to hear back, according to The Economist) only 10% of Sri Lanka's debt is officially owed to China directly, at least according to official figures. 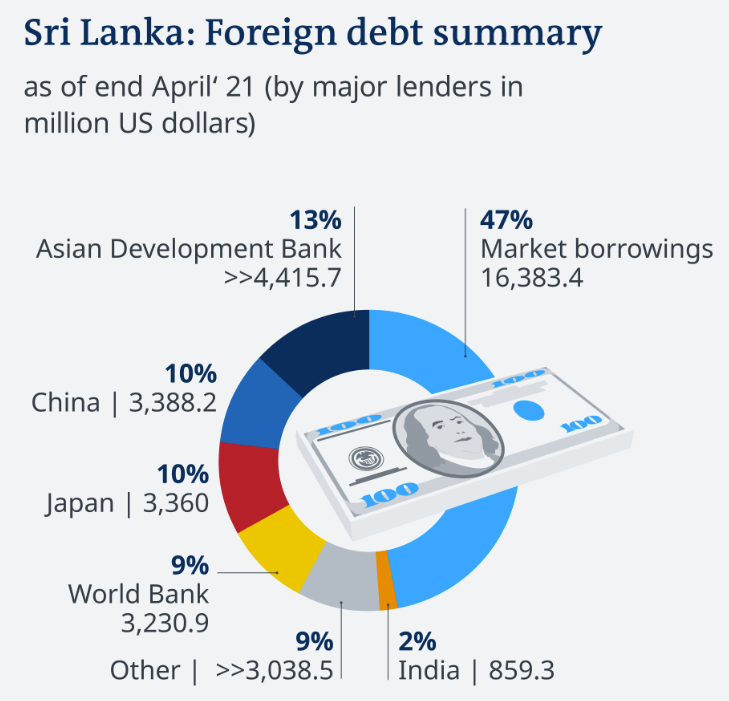 Most of this debt took the form of international sovereign bonds (ISBs). But this quick and dirty solution came at a price: higher interest rates, shorter maturity periods, and greater risk. By 2019, commercial borrowing, which was a mere 2.5 percent of foreign debt in 2004, had ballooned to 56 percent.

In comparison, Chinese-owned debt (including public debt and publicly guaranteed debt) represented only 17.2 percent of foreign debt in 2019. But the real devil lies in the effective interest rates of the ISBs, which are more than double those of Chinese loans. Sri Lanka’s interest payments alone took up 95.4 percent of government revenue in 2021. For comparison, its credit-rating peers Ethiopia and Laos have rates of 11.8 percent and 6.6 percent, respectively.

Import duties are Sri Lanka’s preferred form of revenue collection—more than half of government revenue is raised this way. Rich and poor are taxed equally on consumption of essential food imports, cooking fuel, and even sanitary pads. Heavy taxes on consumer goods have created a regressive tax system that struggles to collect sufficient revenue to finance public spending. In contrast, progressive taxation has failed to grow since the 1990s, with the number of individual taxpayers not keeping up with economic expansion.

The irony here is that as the Sri Lankan government limited imports in order to stem the outflow of foreign reserves, due to the tax structure that also significantly cut their tax revenue. This on top of the pandemic-related loss of tourism income.

It's also true that China was the major lender to Sri Lanka in 2020, but that's because ISB money had dried out, after their credit rating was cut in late 2019 (as a result of their tax cuts), so they could no longer roll over ISBs. And the Chinese didn't lend them enough money to fully cover this shortfall, so Sri Lanka's forex reserves rapidly diminished as they were used to cover the difference.

Not the answer you're looking for? Browse other questions tagged economy china debt financial-crisis sri-lanka .

15
Was the Icelandic economic crisis of 2008 a product of lax government oversight or big government?
6
What reasons does Argentina have to participate in US court proceedings against it in the debt crisis?
2
Did the Greek government take on private debt?
1
Corruption, efficiency and economic success of the Chinese government
5
Why does the U.S. keep pushing "the debt trap" narrative in Africa when China is not the major source of debt distress in Africa?
18
Is the Chinese system becoming more Fascist than Capitalist?
21
How did the US bring down federal debt ratio after World War II?
39
How does debt-trap diplomacy work?
8
Why is the Chinese Model of debt financed economic aid more attractive to Africa than West's structural re-adjustment programs?