Statements on reasons to vote against US H. R. 6930, a bill to confiscate assets from sanctioned Russian oligarchs & use the funds to support Ukraine

What are the reasons that 8 US Representatives holding very different political views voted against US H. R. 6930, a bill to confiscate assets from sanctioned Russian oligarchs and use the funds to support Ukraine?

I am looking for official statements or fact-based analysis, no opinions or speculations. 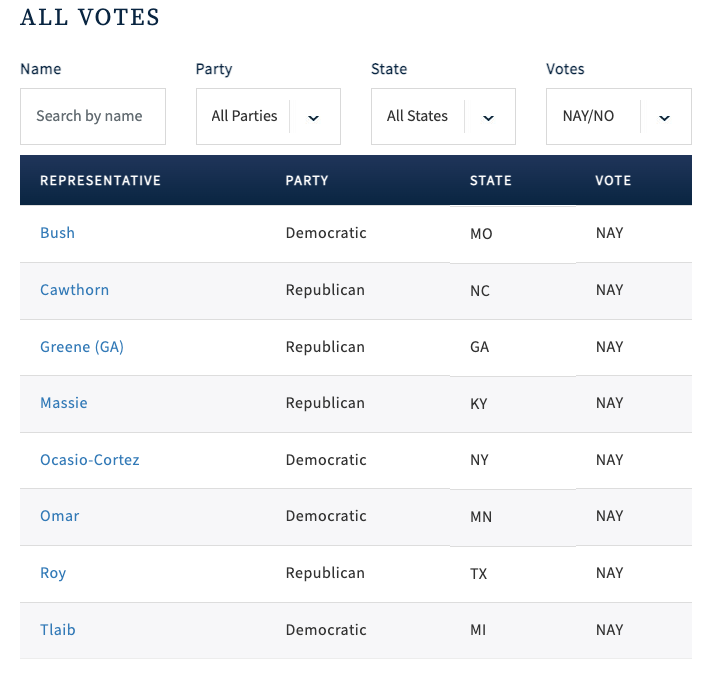 Note: The sources below do not appear to be neutral, but I could not quickly find more neutral references:

The Congressional Record from April 27th doesn't hold any explanation from any of the representatives who voted against the bill, although it does note that Rep. Madison Cawthorn changed his vote from Yea to Nay.

Rep. Alexandria Ocasio-Cortez's staff, however, have released a statement on Twitter explaining her decision to vote in opposition - presumably other members of 'the Squad' who voted in opposition; Reps. Omar, Tlaib & Bush had similar reasons:-

Oligarchs should suffer huge financial losses, which is why the Congresswoman participated in designing and voted for the toughest sanctions in recent memory. But this vote asked President Biden to violate the 4th Amendment, seize private property, and determine where it would go - all without due process. This sets a risky new precedent in the event of future Presidents who may seek to abuse that expansion of power, especially with so many of our communities already fighting civil asset forfeiture.

Rep. Chip Roy has also released a statement on his website regarding his vote:-

This bill wasn’t just about taking Russian assets to support Ukraine, which I support generally; instead, as usual, this Congress is blindly giving power to the executive branch to fund poorly-defined 'democracy and human rights programming and monitoring.' I will not support that, especially when this administration views such things as pro-life policies, traditional views on marriage, and elementary understandings of human biology as potential threats to human rights.

13
Why did Russia start its aggression against Ukraine after the Ukrainian unrest from 2013-2014?
10
Russian government warned North Korea about the use of legal force against their nuclear threats. What is the general procedure in that case?
6
What more would the American Health Care Act (ACHA) bill have needed to garner support from the House Freedom Caucus?
4
Why did Rand Paul vote in support of the 2017 tax cuts if he's against increasing the deficit?
11
What had the Russian government to gain from the late 2021 military build up and threatening possible invasion of Ukraine?
5
Can the US and EU sanction the oligarchs supporting Putin in order to deter him from starting a war in Ukraine?
42
Does Putin need the support of the Russian oligarchs in order to stay in power?
38
What reasoning did Eritrea provide for its vote on the UN resolution against the war in Ukraine?