While this ensures proportionality in parliament, the tradeoff is that it dilutes local representation for smaller communities within the constituency. A small town voter may have a hard time finding a legislator of their constituency to focus on their individual needs because the constituency itself is just too big.

So what strategies do poliitical parties within proportional representation system use to compensate for this gap? For instance, do they set up "local office" as a point of contact between local voters and national legislators? How effective are these strategies in practice?

For the sake of simplicity, lets focus on examples from European countries (e.g. EU member states, Norway, Switzerland, etc). In particular, Netherland is a fascinating example because they use a single, nationwide constituency for parliamentary election.

Germany has a complicated mixture of direct and proportional representation, but the problems apply there as well.

Summarized, for almost all purposes I feel represented by the "nearest" legislator of my party preference, not by the legislator for my district if that legislator is from a different party.

It depends on your definition of local. I consider all the representatives in my 5 seat constituency to be local. Another person might not.

It is certainly true that some candidates concentrate on specific geographical areas within their constituency. They concentrate their efforts within a limited area in the hope that if they can get the majority of the voters within that area that will be enough to elect them.

I haven't analysed the numbers but it is possible there are more seats in a PR based system. My area might have three wards with one elected representative in each one under first past the post, but it is one large ward with five representatives under PR.

It is worth bearing in mind that one of the big problems with FPTP is lack of representation for a significant number of voters. If my area always elects a candidate from party A but I don't think party A represents my views and always vote for party B I won't be any happier just because the candidate lives in the same town as me. This is especially true given the gerrymandered nature of a lot of constituencies. Given a little research it won't take long to find examples of areas where a certain type of voter (urban/rural, conservative/liberal, whatever) has no real representation because they were purposely lumped in with a slightly larger cluster of people who vote the other way.

In Switzerland, the solution comes in two parts:

First, Switzerland is federated. There is the nation, beneath it 26 cantons, beneath those a total of 2148 communes. Each level has its own political institutions, and gets to make its own decisions as long as they don't conflict with decisions from a higher level. In practice, this means that issues specific to a particular area are usually decided by the political institutions of that area, so only locals get a vote.

The second part is the sheer plurality of the party landscape. I live in one of the most populous cantons, which sends 24 members to the national parliament. In the last election, 34 different parties with a total of 651 candidates were vying for votes in my electoral district. So if your locale has a particular political need, it's very likely to find a party that has incorporated it into their platform. And if you don't, you could always start your own party. For instance, there was party dedicated to opposing the deployment of the 5G standard for broadband cellular networks, or a "rural party", a "party of infinite possibilities" (whatever they stand for), a party for small business owners conscious of the environment, a party for female socialists, a party for young environmentalists, even a party started by a farmer who rose to national prominence by caring greatly about the horns of cows (I kid you not!). If he can form a party, so can you!

It's worth noting that aside from the "rural party", not a single of those parties chose to represent a particular geographical region. Common lines of division include political ideology, social class, religion, age and gender, in addition to a smattering of single purpose parties (like the 5G opponents). The successful parties agree: Locale specific politics don't make sense. It's better to unify all voters of like mind, wherever they may live.

In particular, Netherlands is a fascinating example because they use a single, nationwide constituency for parliamentary election

This is not true (except for European Parliament elections).

The Netherlands has twenty electoral districts: 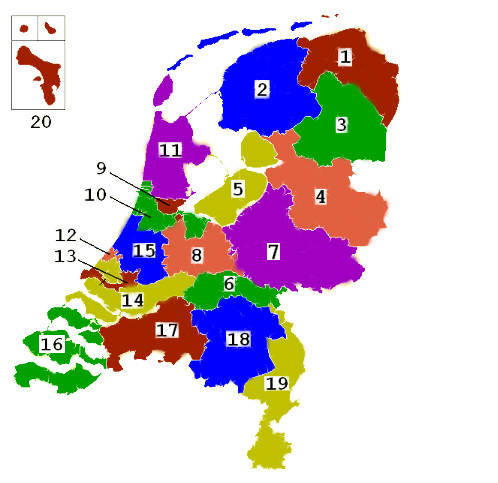 Political parties may decide to have the same candidates in all districts, or to have different candidates in different districts. These days, most parties have the same candidates for the top positions on the list, but then vary the lists further down. They may put a so-called lijstduwer lower down on the list. A lijstduwer (literally [electoral] list pusher) is often a (locally) known person who is sympathetic to the cause of the party. They may not actually intend to take a seat if elected, but their votes still count toward the total party-list votes. The term is derived from lijsttrekker (literally list puller), which is a Dutch term for the national top candidate of the party list.

Some parties participate only in a subset of districts, usually because they haven't met the requirement to gather enough signatures for participation, a requirement that applies per district. Usually those are minor parties with little chance of reaching the 0.67% electoral threshold.

If they wish, parties can have completely different candidates in different electoral districts. They rarely do, because they see it as more successful to put nationally well-known figures near the top of the list everywhere. Even in a small town in the countryside, more people have heard of the top national candidates than of the backbencher who happens to be from the same town.

Parties may choose to have candidates from different parts of the country if they think this is in their electoral interest. This is an internal party matter. However, The Netherlands is a small country, and in the European part of The Netherlands, everyone lives close to everybody else. Therefore, regional representation is not as hot of an issue as it is in more geographically spread out countries, although rural-urban or periphery-central divides do play a role in Dutch politics too.

TL, DR They don't, and nobody wants them to.

full answer In the Netherlands, you can start a party that promotes only the interests of any group, whether the group is defined by economics, ethnicity, religion or region.

It turns out that parties based on regional interests don't convince the voters - not even the frysian-speaking minority.

In part, this might be because most national parties propose candidates from several regions.

More likely (in my opinion) is that the differences between social or economic groups is more important than the region. (Wealthy persons want low taxes, families need good education, ecologists want to give their children a future etc.)

(Many parties take some effort to have candidates from every province on their list. But when those candidates obtain a seat, it is usually because their party has obtained enough seats. Rarely can a candidate jump the queue, although the barrier is very low ( if N votes earn a seat for a party, and the party earns a seat, the law states priority is given to candidates that obtain N/4 votes))

So, how do parties maintain a local representation? They don't.

Note: this applies to the situation in the Netherlands.

But I doubt that local issues play a role in countries like Germany. (In Germany, the system will send the winner of each district to the parliament, and if this doesn't lead to an equal representation, padd the parliament with the representatives from the required parties. So formally, Germans cast their vote on a local candidate, but in practice, they just fill the parliament.)

To give a direct example:

In the most recent state election in my home state, candidates from the major parties competed to win my local constituency. Only one of them won (the CSU candidate). Obviously, he now has a local office and is one possible contact point for all citizens of this constituency. However, voters of the other large parties might not feel represented.

In the case of the Green and Free Electors' candidates, they too were elected into the state parliament via party lists. Thus, they too opened local offices are are contact points for citizens of this constituency. The constituency is made up of the entirety of one Landkreis (county in the British sense) and half of the other Landkreis; it just so happens that the CSU MP's home is in the latter (as is his office) while the other two MP's have their offices in the former's capital.

Finally, there are the SPD and the FDP whose local candidates were not elected. However, both parties have a network of responsible MP's for the different districts based on proximity. So if, for example, I have an issue that I would like an SPD MP to raise in parliament, I would contact the member of a neighbouring constituency whose area of responsibility contains my home town. (The network the SPD has is slightly tighter as they have more members.)

The same is true for the federal parliament except that the constituencies are necessarily larger.

The answer in two words is "with difficulty".

One of the frequently quoted benefits of the British FPTP system, based on 650 constituencies, each representing an average of about 100,000 people is that it identifies the MP with the constituency. He/She is their representative.

There is a lot to be said for this argument. However the big disadvantage is that in a multi-party system MPs largely get elected with less than 50% of the vote. My own preference is to retain the present system, but to use the single-transferable vote with 1st, 2nd and 3rd choices.

So if the winner has less than 50% - the second, and ultimately third choices are counted.

Not the answer you're looking for? Browse other questions tagged proportional-representation .

4
How are leveling seats chosen in Germany's Bundestag chosen?