What possible retaliation could Russia take against Lithuania for enforcing the EU sanctions?

Russia has today threatened Lithuania with retaliation after Lithuania enforced the EU sanctions blocking certain products from transiting Lithuania from Russia to Kaliningrad. Russia refers to this as a blockade.

Given that Lithuania is a NATO member, and assuming Russia doesn't want to start a war with NATO, military action is presumably off the table.

So what possible retaliation options does Russia have?

Russia seems to have suggested that they will close their borders to other traffic, ending the role of the Baltics in transit with Russia.

"If there is no more transit from Russia, the Lithuanian railway won't just be depressed, it will go down to zero," said Alichanov.

Russia is currently keeping the world guessing at its possible options to retaliate. The invasion of the Baltic countries is discussed by the Russian ruling elite, as well as repealing the recognition of Lithuania's independence. The invasion option has popular support in Russia as well. Lithuania is expecting that Russia will disconnect it from the regional electric utility network.

On 8 June 2022 Russian parliamentarian Yevgeny Alexeyevich Fyodorov submitted a bill to the Duma to repeal the recognition by the Russian state of Lithuania's independence. He thought that in this way the other two Baltic states might have their independence reversed too. An academic from the Institute of Commonwealth of Independent States brought up several expansionist devices and suggested that the Baltic States were "making the same mistake as Ukraine, which believed that the Russian Federation would never send troops because the United States was behind it."

While there’s no reason to suggest an attack is imminent, the Russian leader appears to delight in keeping the West guessing what his next move will be. Earlier this month, he praised the imperial exploits of Peter the Great, declaring that “a country is either a sovereign or a colony,” comments that did little to reassure the Baltics. Mikhail Kasyanov, a former Russian prime minister under Putin, added more fuel to the fire last week, predicting that “the Baltic states will be next” if Ukraine falls.

THE MOST DANGEROUS PLACE ON EARTH: https://www.politico.eu/article/suwalki-gap-russia-war-nato-lithuania-poland-border/

Nikolai Patrushev, a former KGB spy who is now the secretary of Russia’s Security Council, said Lithuania’s “hostile” actions showed that Russia could not trust the West.

“Russia will certainly respond to such hostile actions,” Patrushev was quoted as saying by state news agency RIA.

“Appropriate measures are being worked out in an interdepartmental format and will be taken in the near future,” he was quoted as saying. “Their consequences will have a serious negative impact on the population of Lithuania.”

Russia tells Lithuania: Your citizens will feel the pain over Kaliningrad: https://english.alarabiya.net/News/world/2022/06/21/Russia-tells-Lithuania-Your-citizens-will-feel-the-pain-over-Kaliningrad

"The situation is more than serious," Kremlin spokesperson Dmitry Peskov told reporters. "This decision is really unprecedented. It's a violation of everything."

"If cargo transit between the Kaliningrad region and the rest of the Russian Federation via Lithuania is not fully restored in the near future, then Russia reserves the right to take actions to protect its national interests," it said. 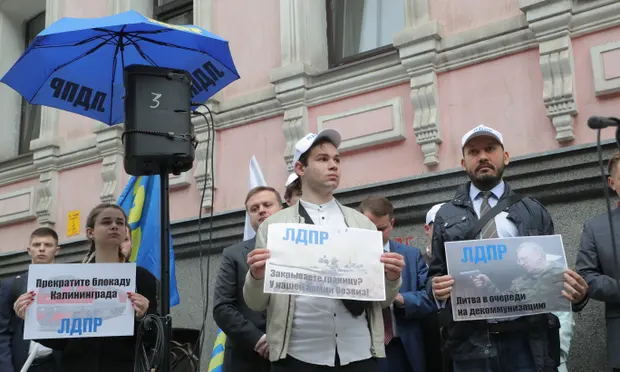 Activists protesting outside the Lithuanian embassy in Moscow on 21 June against rail curbs in Kaliningrad display posters saying ‘Closing the border? Our army has visa-free’ and ‘Lithuania in queue for decommunisation’. Photograph: Maxim Shipenkov/EPA

(Lithuania is expecting that Russia will disconnect it from the regional electric utility network in response to the limits on cargo transport to the Kaliningrad region, said President Gitanas Nausėda in the interview to Reuters.)

The Kremlin has very few options for how to retaliate, short of attacking the NATO block (source). The decision to attack the NATO block, if any ever, will not be based on the access to the railway that is convenient but not necessary (air and sea access exists).

It is the same situation as for Norway that now due sanctions cannot longer offer to Russia the previous convenient access to Arctic islands (source): Norway is not breaking the Svalbard Treaty, only applying international sanctions. Norway is not a sole decision maker here.

Russia needs to negotiate with EU to lift these sanctions. If they would manage, Lithuania alone very unlikely to object but must be said at serious level where all sanctions are discussed, not by a single EU politician. As I understand, Russia already understood this and is attempting.

While Russian officials have been fairly vague in their description of possible countermeasures, e.g. as Medvedev put it (in the Reuters news piece linked in almar's anwer):

"There is also the possibility of using asymmetric measures, which ... will cause a critical escalation of the conflict."

Unnamed EU-related officials seem to seriously consider the possibility that Russia may initiate some kind of "special military operation" to open a land corridor to Kaliningrad.

If the traditional route for Russian goods to Kaliningrad, first via its ally Belarus and then Lithuania, is not restored, the Baltic state fears Moscow could use military force to plough a land corridor through its territory, the person said.

So it doesn't look like "military action is [...] off the table", at least in the minds of some EU-related officials.

This aside from further economic retaliation like reducing gas exports further (and according to some experts faster than the EU can find replacement sources, at least this year) although Russia insofar has denied a link between those gas export reductions (aside from the countries that refused the new ruble-linked payment scheme) and the broader political confrontation. Since Lithuania says the traffic measures are entirely due to EU-level regulations/sanctions, putting pressure on the EU countries farther afield is also a viable approach for Russia in this dispute.

The question is wrong to assume that Lithuania is "just" trying to uphold the EU decisions and is free to do so.

The treaties regarding Russian transit to its exclave Kaliningrad is not something that Lithuania took voluntarily. Their confirmance to these treaties is predicate to the independence of Lituania.

Thus, any sanctions set up by the EU should have provisions that would let Lithuania continue to uphold its pre-existing obligations to Russia. It does not seem to be the case, so in essense EU is sacrificing Lithuania's security:

Russia has obligations before its own citizens in Kaliningrad which are obviously more important than Russia's obligations towards Lithuania's territorial integrity. If the EU's blockade of Kaliningrad is successful to a degree that population of the region is significantly affected, Russia will be obliged to unblock it by any means available.

Update: Trade through Lithuania to the Russian exclave of Kaliningrad could return to normal within days, two sources familiar with the matter said, as European officials edge towards a compromise deal with the Baltic state to defuse a row with Moscow

21
Legality of Syrian invasion by US and allies
5
What action could the UK actually take against Russia in light of the Salisbury attack?
10
What is the rationale for hosting CIA secret jails by Romania and Lithuania?
10
Why did the EU threaten to retaliate over Airbus-related tariffs even after they were allowed by the WTO?
2
Has Lithuania completed its border fence with Russia (Kaliningrad)? If so, what is the length of the fence?
19
Has any Western leader articulated how NATO would benefit from admitting Ukraine?
8
Did the sanctions against Russia take into account that oil price might neutralise their effect?
15
Has Ukraine ever considered being neutral after the collapse of the Soviet Union?