Why is the left/right spectrum defined so ambiguously? (Europe)

I am currently in Germany so my views are from an European perspective. I never could quite comprehend how the definitions of "left" and "right" are used here.

Right seems to be used as a derogatory term and people constantly try to distance it from it as if it were something inherently bad, mistaking the term "right" (in my opinion) for far/extremist right ideologies.

Additionally, the economic axis of e.g. the political compass or the Nolan chart, seems to be never taken into account when taking about the left/right spectrum (see picture at the end of this post). The FDP is arguably the most liberal party in German politics, both on social as well as economic matters. Nonetheless, it is a right wing party since right wing is defined by economic matters, not by social.

However, when people talk about "gegen rechts" (against right) they typically march against the AFD, which is a national populist party with rather xenophobe views.

How then is the political spectrum defined? If you have on the right parties like the AFD, where would you place libertarians? This does not make any sense to me at all. 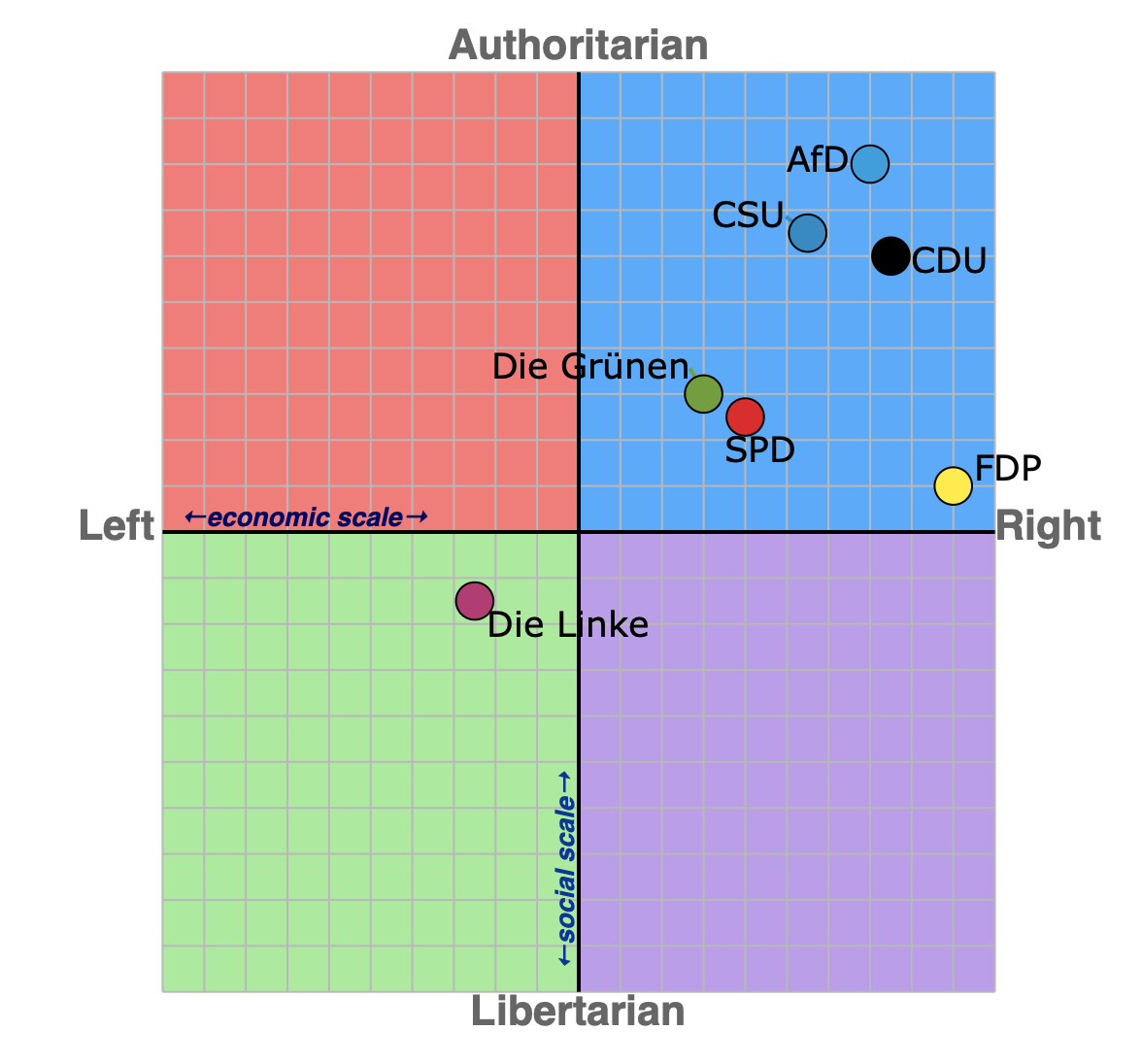 (I am not going to comment on the Libertarian/Authoritarian distinction. First, because I think Libertarianism is not a very fitting term for most European political views, apart from the small minority of Anarcho-Syndicalists. And second, you specifically asked about left and right.)

There is only one objective measure of left and right in politics: the seating order in parlament. In the German Bundestag, until last year, the order was (left-to-right)

After the 2021 election, the FDP requested to be seated left of the CDU/CSU, and that was granted. So the new order is

Apart from that, all views are subjective. It doesn't make much sense to ask "which party is left or right?" The best you can ask is "who is calling whom left or right?"

So the asymetry you observed is one of self-assignment primarily. There is a reason for that.

If a "left" viewpoint promotes economical egalitarianism, it does that as a critique on the state of society. Such a critique needs a framework of reasoning, and Die Linke, SPD and (left-wing) Grüne accept that their thinking is somehow based on the marxist materialist analysis of the structure of society. (Which certainly does not mean that they would call themselves Marxists.) While calling that base of reasoning an "ideology" has fallen out of favour for a lot of them, almost all would agree that theirs is only one standpoint of multiple possible. Giving out the labels "left" and "right" seems to be a reasonable way to acknowledge that.

European political liberalism like that of the FDP (the term "libertarian" is not used by them) also accepts that its view on society is based on a theoretical framework - measuring the state of society by the freedom that its members enjoy. But they maintain that their position is neither left nor right, because a critique of economic inequality is not part of their analysis. In a one-dimensional view of the political spectrum they are both anti-authoritarian (which would be considered left) and anti-eglitarian (which would be considered right).

Both the CDU/CSU and the AfD hold strong views of having no ideology. Quite contrary, they think of their own political views as "common sense" or "natural". The only terms they accept that would distinguish their standpoints are "bürgerlich" and "patriotic".

The case of the AfD calling themselves "patriotic" is easier explained. They see patriotism as a natural position in the order of the world - every person has its place, and should defend that place against outside influences. As it is natural, everyone is supposed to have that view, and diverting standpoints lack legitimacy. Using the labels "left" and "right" would implicate a parity between both views, and that is negated.

The term "bürgerlich" is complicated, and it has no direct english translation. It is used by the CDU/CSU and the FDP for themselves, also by parts of the Grüne and parts of the AfD. But let's stay with its use by the CDU/CSU, where it is usually paired with a second self-description, "the party of the middle". In this sense the translation "middle class" has a lot of merits: persons of average standing, in the middle of society, living an average lifstyle, content of their circumstances, are to be protected by politics, so that their way of living does not errode. But despite the obvious parallels, only parts of the party accept the term "conservative" for themselves. Others maintain that "the middle" is a moving target, and that modernization is a neccessary part of society. What all of them agree on is that what makes up "the middle" is mostly self-evident. The CSU has a more pronounced tendency to look out for average viewpoints, and then adapt them as party policy, while the Christianity-oriented parts of the CDU think more in terms of a pre-given order (while still being a long way removed from American Evangelicalism). For all of them the pair "right and wrong" holds a lot more weight than "left and right". Using the latter would label their politics as biased.

Not the answer you're looking for? Browse other questions tagged ideology europe .

21
Was Hitler's regime a right-wing regime?
4
How to find out whether you're on the left or right?
2
Why are Anglophone right-wing working class discourses fixated on taxation, state expenditure, and the state generally?
17
What's the cause of the general rightward shift in western politics over the last 30 years?
2
Why is there no rise of extreme-left in present-day Europe?
3
Left, right change on Russia
19
Why do working class people vote for the political right?
4
Is fascism left or right wing?