Why not have a partial no-fly zone for Ukraine? [duplicate]

Ask Question
Asked 3 months ago
Modified 3 months ago
Viewed 408 times
-1
This question already has answers here:
What would setting up a no-fly zone by NATO over Ukraine actually mean? (3 answers)
Closed 3 months ago.

The community reviewed whether to reopen this question 3 months ago and left it closed:

From what I understand, the major argument against establishing a no-fly zone is that it requires attacks beyond Ukraine's borders. The first step in establishing a no-fly zone is to knock out AA defences on the ground. Since many of those defences are likely to be located within Russia's borders, it means bombs and missiles hitting Russian soil - something that's not politically possible yet.

But what are the arguments against a partial no-fly zone? By partial, I'm thinking something like western Ukraine delineated by Dnieper river. That way all the SEAD sorties would strike Kherson plus I'm guessing a 100km buffer on the other side of Dnieper. This area we're talking about is definitely not Russian soil by any stretch of the imagination. Not even Russia claims that Kherson is Russian soil - yet. Why not act now before it becomes de-facto Russian soil?

Doing this would accomplish the following:

If the counter argument is that Dnieper is still way too far east. And/or that 100 km buffer is not enough to project jets from long range SAMs, what about the same idea but even further west? Or committing only unmanned drones close to this demarcation line while keeping piloted jets out east. Even then, the exception could be low level attacks with A-10's, Apaches and such.

Back to the question. Why is it all or nothing rather than some type of a customized implementation that fits the current needs? The extreme version of this question is "why not have a no-fly zone only directly above Lviv?" While tactically insignificant, even that little gesture would be a complete win on strategic and political level. It's because even if Russia takes 90% of Ukraine, it can never hope to have whatever corner happens to be covered by a no-fly zone. Lack of hope is a powerful weapon.

Any no-fly zone over Ukraine, even a partial one, is unlikely, because it will result in direct confrontation of NATO and Russia. Since both parties have nuclear weapons, this raises the risk of a global nuclear war, and a possible destruction of civilization.

That is also why an NFZ is so breathtakingly dangerous, with the potential to raise the risks of nuclear war. An NFZ needs to be enforced by military means, putting US and NATO pilots in the position of shooting down Russian aircraft and killing some of their personnel, both in the air and on the ground. There is another problem: Russia’s long-range air defenses reach well into Ukraine from Russia and Belarus, so effective enforcement of a full or even partial NFZ would almost certainly require bombing Russian territory.

Calling it a “limited” or “humanitarian” NFZ in no way limits the risks. It still amounts to a declaration of war against Russia. A “humanitarian” NFZ may “not seek direct confrontation with Russian forces,” but Putin would hold all the escalatory cards in this scenario.

A no-fly zone over Ukraine? The case against NATO doing it. By Kelly A. Grieco, March 18, 2022: https://www.atlanticcouncil.org/blogs/new-atlanticist/a-no-fly-zone-over-ukraine-the-case-against-nato-doing-it/

Despite these calls, U.S. President Joe Biden and his advisors have consistently rejected the idea of a NATO-enforced no-fly zone over Ukraine. They argue that the policy would lead to direct combat between U.S. and Russian forces and risk uncontrollable escalation—the “exact step that we want to avoid,” as White House press secretary Jen Psaki said on March 3. Last Friday, Biden underscored this view. “We will not fight a war against Russia in Ukraine. Direct confrontation between NATO and Russia is World War III, something we must strive to prevent,” he said.

International relations (IR) experts overwhelmingly agree with Biden. The Teaching, Research, and International Policy (TRIP) Project at William & Mary’s Global Research Institute asked IR scholars at U.S. universities and colleges for their views on the use of U.S. air power to enforce a no-fly zone over Ukraine. The results reported below are based on responses from 866 respondents surveyed between March 10 and 14. (Complete results can be found here.)

These experts are nearly unanimous in their opposition to the establishment and enforcement of a no-fly zone over Ukraine. Respondents reject a U.S.-enforced no-fly zone because they fear it raises the risk of escalation, including the likelihood of a Russian nuclear attack against Ukraine or NATO countries. 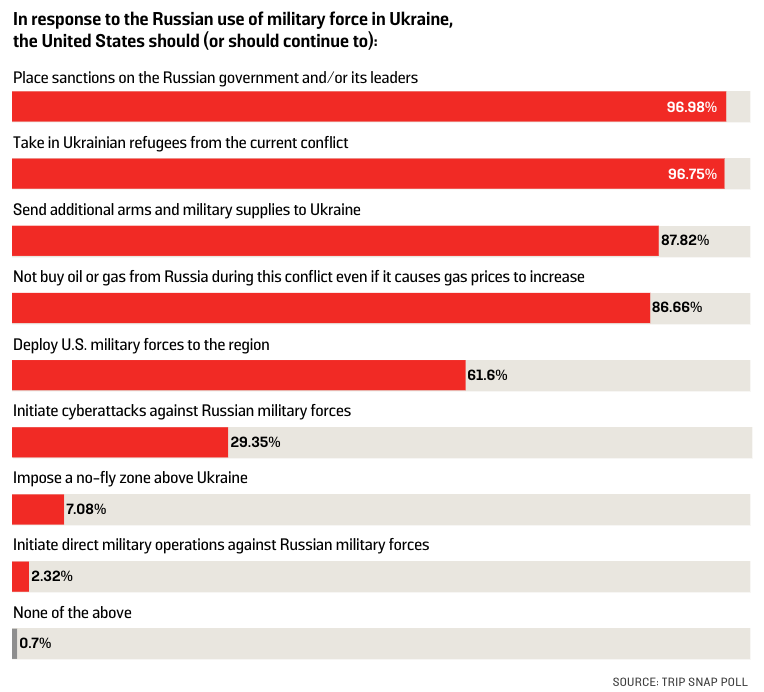 The problem with the no-fly zone is not just that it might require strikes on Russian soil. Just as importantly, it would require strikes by the enforcing powers against the Russian armed forces. That is commonly understood to mean WAR wherever it happens1, while providing weapons without the crews is understood to mean NOT WAR. A war between nuclear powers is a very bad idea.

The US or NATO have all necessary legal justifications for going to war against Russia, since they would be helping Ukraine in collective self-defense. (That doesn't require prior treaties.)

1 Unless both sides agree to treat it as an unfortunate accident, and not as an act of war.

As a personal note, I have sympathy for people who are grasping at possible solutions to stop the attacks on civilians. But, please, don't deceive yourself about steps that will mean WAR. Starting one in a half-hearted way would be just about the worst thing the US and NATO can do.

Let's start out with the first.

What does it achieve, exactly?

Currently there are 4 main ongoing problems:

(I defer to the first answer as to why it is a risk and why experts, not just pundits like me, think it is a bad idea). But let's address the historical counter argument that "it's been done before, and it worked out".

After the Cuban Missile Crisis, cited as an example why "it's not so bad", both the US and USSR recognized the risks and resolved not to put their forces into direct combat contact. That was the correct position 50 years ago, it is now.

The first 2 had limited casualties, and took place in essentially empty territory. The 3rd had no casualties. A longer, much more bitter, round of fighting, like we've been seeing in Ukraine, makes it less likely that cooler heads will prevail if things start to escalate.

The risk of nuclear escalation is low, certainly. But they need to be weighed against the downsides if it does happen, which are catastrophic.

Since the invasion's initial troubles Putin has been shifting his narrative to recast the war as a struggle of NATO-vs-Russia rather than just Ukraine-vs-Russia. Poor Russia has no choice but to defend itself:

Involving NATO combat troops directly plays right into his hands. Within Western countries any "near misses" related to no fly zones will certainly strengthen the arguments of the appeasers for pushing Ukraine into a ceasefire.

Because the American government does not wish to impose a no-fly zone of any sort at the present time, and NATO members that might wish to establish an NFZ do not believe they have the capability to do so and also uphold their other military commitments.

Of course, you might (reasonably) protest that the above answer doesn't really answer anything and just invites the question "Why doesn't the American government wish to impose an NFZ?". It is questionable how on-topic the internal motivations of the US government are for this site, but nevertheless we can think of several reasons why they might choose to act this way:

I've tried to summarise some "obvious" motivations above, but the list is not intended to be exhaustive and nor should every suggestion be considered likely.

22
What would setting up a no-fly zone by NATO over Ukraine actually mean?
20
What is the basis for the Western leaders to believe that harsh economic sanctions will not lead to a nuclear war with Russia eventually?
9
Why does Zelenskyy urge NATO to impose a no-fly zone?

4
Has Ukraine implemented section 11 of the Minsk II agreement?
22
What's the basis for preparations to imminent Russian invasion into Ukraine?
16
Have any politicians in Ukraine considered ejecting Luhansk and Donetsk?
15
Does the UK have the military capability to deny Russia air supremacy over Ukraine?
15
At the beginning of the war in Ukraine, which U.S. forces were immediately ordered to pull back, and from where?
2
What troops does the United Nations use to enforce a no-fly zone?
43
Is it politically acceptable to incentivize soldiers of another country to desert?
22
What would setting up a no-fly zone by NATO over Ukraine actually mean?
9
Why does Zelenskyy urge NATO to impose a no-fly zone?
45
Exit strategies for the Ukraine war