How many Russians say Alaska is rightfully theirs?

There is a theory proposed by at least one Russian political scientist that the treaty by which the Russian Empire sold Alaska to the US is actually void, on the argument that the US subsequently violated some provisions regarding the Russian population in the region.

Gorodnenko says the US had promised former Russian nationals based in Alaska guarantees of “the enjoyment of freedom, property rights and the practice of their faith.” But after a short time, all Russian-language schools were closed, and teachers were punished for educating Russian-speaking children.

Gorodnenko states that “The descendants of the inhabitants of Russian Alaska are discriminated against. The territory transferred to the United States has not developed. This means that the treaty between the US and Russia should be considered invalid. Russian Alaska is subject to return.”

Are there any polls on how widespread this type of belief is in Russia, i.e. practical ability to recover it notwithstanding, how many Russians say Alaska is rightfully theirs?

I've never heard the claims that you are describing; instead, what I've heard is that Alaska was not sold but leased, not unlike the northern territories of Hong Kong, and that lease has since expired.

Anyway, Russia arguably does not make good use of Chukotka so the interest in Alaska is very low. There's some folklore from both sides about Russian military suddenly popping in Alaska, but there's no real interest in the matter. For example, Sputnik & Pogrom's famous map of Russian claims does not include Alaska or any new territories east of Mongolia's westernmost point.

The population of Alaska is greater than that of Chukotka, Kamchatka and Magadan region combined, and it's entirely non-Russian, so it's obvious that Russia could not control that region politically in any way.

I don't believe the number is higher than 0.1% on average since the sale happened. No politician, or elected official, seriously brought up the question. At times of escalated hostility between US and Russia, it may be brought up, the way people call for using strategic nuclear weapons to "teach them a lesson". It's just a mechanism to vent public frustration, not a possible course of action. Russians they say stuff like that in a serious discussion are ether hardcore monarchists, or some other super fringe group. I doubt anyone would conduct a poll that included this question because the mere suggestion of this being an option is so outlandish. It would destroy the credibility of the poll, requiring carefully neutral formulation of questions to avoid influencing answers.

There are no solid polling data on how many Russians say Alaska is rightfully theirs. I was able to find the following results, indicating that between a quarter and a third of Russians say that Alaska should definitely be Russian. These results are highly suspect due to small numbers of respondents and no evidence of random sampling:

The idea of the return of Alaska has been circulating both on Russian Wikipedia and in the Russian Parliament (Duma) at the top level.

Interestingly, a popular song "Uncle Vova, we are with you!" got 754,000 views on YouTube and features a call to return Alaska to Russia: "We will return Alaska into the harbor of our Fatherland!". The song is performed by a chorus of children led by an ex-Russian MP, now a vice-mayor of the city of Volgograd, Anna Kuvychko. Uncle Vova is a reference to Russian President Vladimir (Vova) Putin.

"Alaska is ours!" billboards (reminiscent of "Crimea is ours!") are also being put up across Russia.

The Speaker of the Russian Duma Vyacheslav Volodin threatened the US to return Alaska [to Russia], if that country continues to manage the international assets of Russia. He mentioned this at the plenary session of the lower chamber of the parliament.

"There is such a region, Alaska. And let America, when it tries to manage our resources, ponder that we too have things to return", said Volodin.

Oleg Matveychev, a member of the Duma, told Russian state television earlier this year that Russia should seek the "return of all Russian properties, those of the Russian empire, the Soviet Union and current Russia, which has been seized in the United States, and so on."

When asked if that included Alaska, Matveychev responded that it did.

A separate upsurge in the popularity of the topic of the return of Alaska occurred in 2014, immediately after the territorial expansion of Russia [to include Crimea], which was not recognized by the majority of the world community.

A popular song: "Uncle Vova, we are with you!": https://www.youtube.com/watch?v=3ZZJJ1k8xAE

The billboard "Alaska is ours!" in Russia: 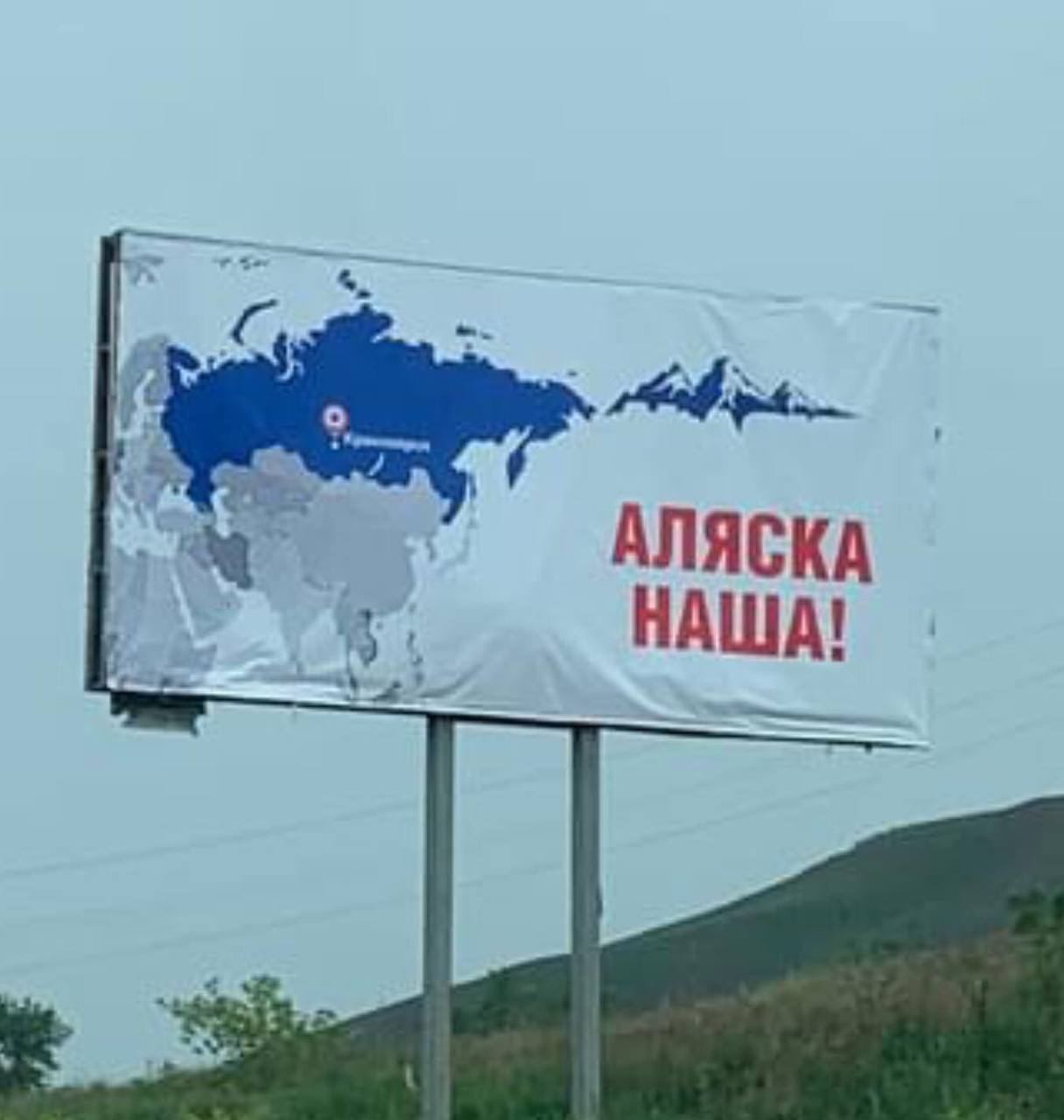 As already mentioned in the answer by Timur Shtatland, there are defenetly people in Russia thinking that Alaska should be part of Russia but the exact number is unknown. Also an other polititian tallking about making Alaska part of Russia again was Vladimir Zhirinovsky. Here the link to an article with his claim and the translation:

Zhirinovsky told how to return Alaska to Russia

Russia must restore the borders of the USSR. This was called for by the head of the LDPR faction in the State Duma, Vladimir Zhirinovsky, on the air of the Rossiya-24 TV channel.

According to the politician, Russia should strive to restore its former borders. In addition, Alaska, which today belongs to the United States, should also return to the Russian Federation.

According to Zhirinovsky, all this is quite real, and in the end, Ukraine, Belarus, the Baltic states, and other former Soviet republics will join the Russian Federation. “I'm talking about the end result: 2025, 2030, 2040.

As can be seen in the article Zhirinovsky claims some other teritories for Russia.

16
Why is the Crimean peninsula so important for Russian trade?

13
How Many Russian Citizens Live in Crimea?
19
How many people are in favor of legalizing marijuana, but have no intention of ever smoking it?
8
How do Russians view the Kurds?
9
How many people in the US watch RT programming regularly?
18
How do Russians [especially Russian Muslims] understand Putin's disapproval of 'multiculturalism'?
12
What is the public opinion in Hong Kong about the protests? How many of them support it?
51
Why do so many Russians approve of Joseph Stalin's regime?
28
How did Alaska "change its primary system recently" and was it "to dilute the possibility of a conservative or Trump-inspired challenger"?
4
How exactly can keeping chips using EUV technology "pre-empt many worst-case human rights... scenarios in the coming decades?"