Year-by-year breakdown of deaths in the Donbas attributed to military operations, 2014-2021?

I can easily find the total casualties for 2014-2021 (which vary by source), but not a year-by-year breakdown, to gauge the pace of the conflict (before 2022) from that perspective. According to a UN (OHCHR) document (dated Jan 27, 2022) cited therein, the breakdown by year of civilian deaths looks like this: 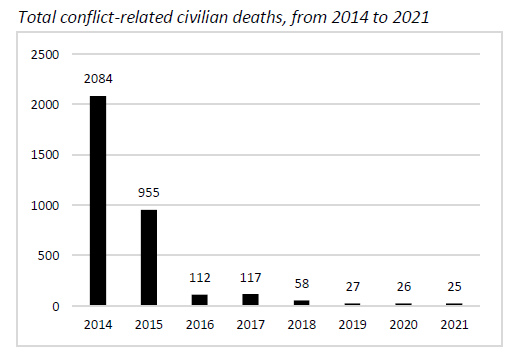 But that graph doesn't include losses in the armed forces. So, I'm looking for similar graph that includes the latter, or at least paints those separately. I realize that when it comes to military losses, the two sides (DPR/LPR v Ukraine) may have provided different figures of their own casualties not necessarily matching what the other side claims to have neutralized (if there is even any data on the latter) etc. So ideally an answer should include data from 2-3 sources, but I realize that such detailed data might not exist, broken year-by-year. Basically, I'm trying to figure out if the UN graph regarding the civilian deaths is representative of the combined civilian+military deaths, i.e. the pace/deadliness of the conflict year-by-year, before 2022.

11
What had the Russian government to gain from the late 2021 military build up and threatening possible invasion of Ukraine?
4
How do Russia's military options in Ukraine in 2014 compare to the present day?