Have Donetsk and Luhansk recognized each other as independent states?

The Donetsk People's Republic and the Luhansk People's Republic, fighting alongside Russia against Ukraine, have been recognized as independent states by Russia, Syria, and North Korea (as well as by Abkhazia and South Ossetia, as pointed out in the comments below), but I'm struggling to find any information about the mutual recognition of those two territories as independent states. In particular, I can't find the names of their ambassadors to each other, while I was able to find the names of their ambassadors to Russia.

I'm highly puzzled by the apparent absence of any information about the mutual recognition of Donetsk and Luhansk, given the ties between the populations of those two territories and them bordering each other and being allies in a military conflict.

Have Donetsk and Luhansk recognized each other as independent states at all? Have they established mutual diplomatic relations? Have they exchanged ambassadors? If not, why? Do they have a problem with each other?

They have implicitly recognized each other by being a part of Novorossia.

When it was suspended, it's quite possible they did not make moves to recognize each other explicitly (both due to Minsk Accords?).

Current situation remains unclear and I would be glad to be corrected.

For what's worth it, the DPR (which has a foreign ministry website I could find) doesn't list a representation/embassy in the LPR, although it claims to have one in France etc. (besides Russia) 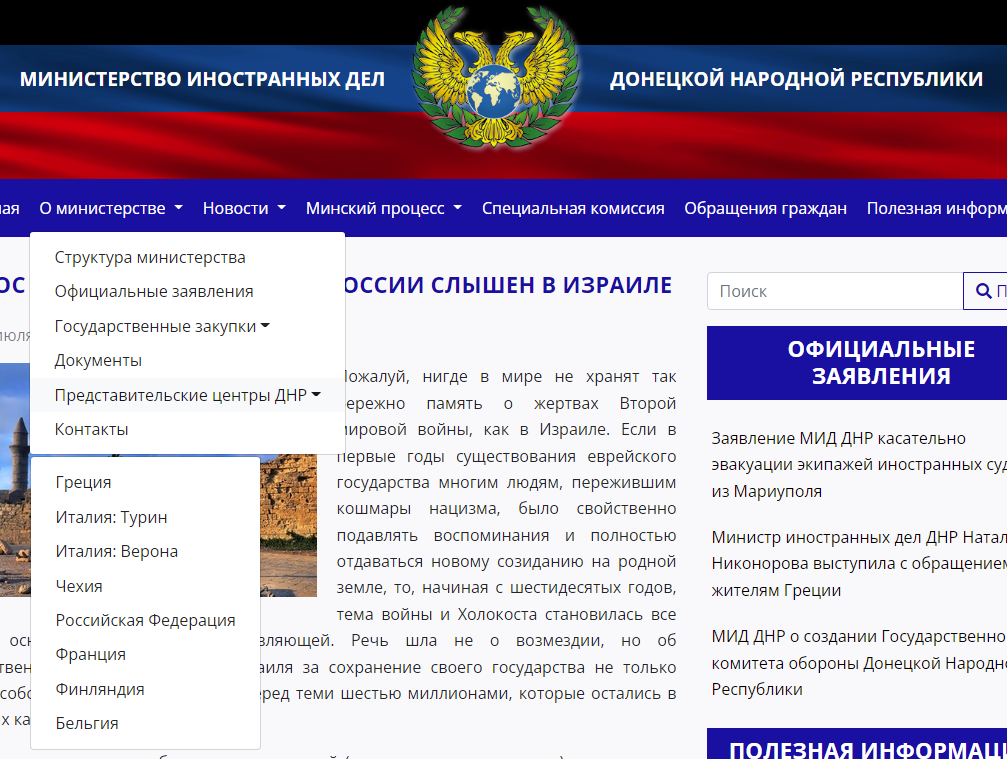 The LPR leadership had a somewhat troubled history, with some coups, former PMs dying in their own prisons etc., so it's a bit hard to say how much of the decisions of former administrations had been carried forward by later ones.

Not the answer you're looking for? Browse other questions tagged russian-federation ukraine embassy .

-1
Why can't Ukraine just surrender Donetsk and Luhansk?
13
Was there any war Russia has ignited that was NOT explained by its "support" of a newly-created "People's Republic"?
1
Does the host country have a say in an unrecognised state establishing a representative office?
15
Why did the LPR and DPR in Donbas not form one People's Republic?
16
Have any politicians in Ukraine considered ejecting Luhansk and Donetsk?
37
Why does the US treat the problems of Russia and Ukraine as its own?
26
Has Russia recognized land currently held by Ukraine as sovereign territory of the LPR/DPR?
10
What does Russia gain by recognizing the separatist regions in the Donbas as sovereign?
4
Which countries have openly supported the Russian invasion of Ukraine?
24
On what grounds did Vladimir Putin invoke Article 51 of the UN Charter for self defence while going into Ukraine?