How close is China's army allowed to be around Taiwan in order to avoid/trigger Taiwanese army's firing?

It is reported that China will hold live ammunition military drills around Taiwan as Pelosi visits.

If you look at these red blocks representing China's ammunition military drills regions, it seems that any sovereign state's military would feel obligated to fight against such a sheer threat. Imagine if any country attempted similar military drills along the coastline of the United States...

But Taiwan's issue is very subtle. It seems that Taiwan's army are very tolerant of China's close threat and dare not do anything like shooting at the aircraft or warships of China. What is the Taiwanese army's bottom line (its official policy or statement, or anything their officers have mentioned before on this)? Do they fire back only after China's army fires first against them? 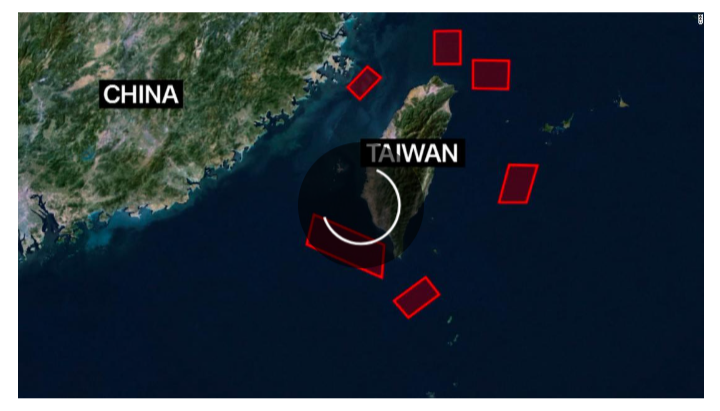 I doubt they would make those "red lines" public even if they have them 100% sorted out beforehand. Typically PRC aircraft stay out of the 12 nautical miles limit and are intercepted/warned-off in the broader ADIZ (Air Defense Identification Zone), which is not legally binding in international law.

The PRC and Taiwan, then still recognized (by the US) as the ROC, have exchanged artillery duels, including jets shot down and ships sunk on both sides in the late 1950s, but I'm not sure there have been significant shooting incidents since then.

If you look at Taiwan's size, about 300km North-South, you'd see that those red blocks are mostly all just out of the 22km territorial waters limit. So really there isn't all that much Taiwan can complain about, legally. Might makes right, except that it's already legally in a gray zone.

Re. any sovereign state's military will feel obligated to fight against such sheer threat - Taiwan needs the US to intervene if it gets attacked and would not risk giving it an excuse not to by being itself trigger happy.

However, a small part of the exercises will be within 10 miles.

Beijing announced plans for six zones encircling Taiwan where it said it would carry out live-fire military drills from Thursday to Sunday, according to a statement released by Xinhua, China’s state news agency. Ships and aircraft were warned against trespassing those areas — some of which overlap with the island’s territorial waters — for “safety reasons,” the statement said. One of the areas of the planned drills appeared to be less than 12 miles from Kaohsiung, a southern port city, according to a map released by Xinhua.

What China is saying is "we're firing live ammo in these areas, stay out". This area of actual intrusion is quite, quite, small. That does not mean China will move planes or ships into it - they may just fire shells or missiles to make a point. Or even not do no so, after saying they reserve the right to do it.

They may still intrude and get chased out: big incident, little actual "damage". On Taiwan's end, they are very happy to be getting the visit, so there is also an incentive not to heighten tensions overmuch, to avoid dissuading future US visits.

Compared to what some sabre-rattlers are calling on China to do, and given the level of provocation claimed by China, this isn't all that horrible an outcome. But it would still be easy for something to go wrong and Pelosi's visit is needlessly pushy on a China that the West needs to keep from supporting Russia overmuch during the current Ukraine crisis.

"China threatens to shoot Nancy Pelosi’s plane down if she visits Taiwan," says a July 31 post on Instagram. It was flagged as part of Facebook’s efforts to combat false news and misinformation on its News Feed. (Read more about our partnership with Facebook.)

The statement did not originate with China’s government. It was tweeted by Hu Xijin, former chief editor of and now a commentator for the Global Times, a Chinese nationalist newspaper. He later deleted the tweet after Twitter blocked his account.

Sure, the US would probably not fire missiles into a country's territorial waters just to make a point. But then again the US has a long list of other "departures" from international law (as I expect multiple comments to pipe up about) when it suits them, so acting over-sanctimonious here is more theater than them being objectively better in this regard.

i.e. this will probably all blow over but the UN chief makes a good point that we are taking big risks. In this case, for unclear reasons besides Pelosi's posturing.

p.s. I am not being supportive of China or its intent to reunify Taiwan by force if necessary here. Merely stating that risking armed incidents, especially at this point in time, for fuzzy notions of "national integrity" would be the height of foolishness. Here's another example of unproductive jingoism. Plenty of time to show some backbone towards China when something critical happens. Wanna help Taiwan? Sell them better weapons.

Not the answer you're looking for? Browse other questions tagged china taiwan .