The US Senate has recently passed the Inflation Reduction Act. Admittedly, I did not read all 755 pages of the bill, but the media claims that it is one of the biggest investments on climate change and healthcare in US history.

My question is two-fold:

As you said, this is a monster bill with all sorts of provisions that are only marginally related to inflation reduction. This is a consequence of the Senate filibuster and reconciliation rules.

In the Senate, debate can continue until there is no more time for debate, and in that case the bill won't pass. This would allow a single senator to block a bill. So there is a provision for a motion to be passed to force a vote. But to pass this "cloture" motion, 60 votes are needed. The effect is that you need 60 votes to pass a bill through the Senate, and the democrats only have 50.

But there is an exception. To allow finance bills to be passed (and so keep the federation running) there is a process called "reconciliation". The Senate can pass three reconciliation bills per year, but these bills have to relate to tax and spending.

Because these bills can be passed with 50 votes (plus the VP) they can allow the Democrats in Congress to pass measures that would otherwise be blocked by the Republicans. But as they are limited, reconciliation bills tend to be Huge, with lots of unrelated provisions.

So here is a tax and spending bill, which was written with the intention of reducing inflation, but to which the Democrats have attached spending proposals for a lot of their other priorities, such as the climate crisis and healthcare.

This bill would raise the tax take, and shift it further towards higher earners, the money taken would then be used to lower the deficit, which is ultimately anti-inflationary. It contains some other specifically anti-inflationary elements, such as allowing for more government control of drug prices.

Bills in the USA tend to get names that are part of the advertising for the bill. This contrasts with other countries in which the culture is for the names of bills to be dry and descriptive.

Names are powerful. The Sapir-Whorf hypothesis isn't just a hypothesis. The way we name things influences how we think about them, how we categorize them, what base assumptions we make about them without even thinking about it. This makes names a very useful manipulation and influence tool.

If you want to seize power to plunder a country, your terrorist group should really have "People's Liberation" somewhere in its name. It wouldn't do to call it the way it is, for example "Association for the Violent Redirection of Plundering to Me and My Buddies." You'd get a lot less support. It simply wouldn't work that well.

Like most bills, in a truthful universe, this one would be called "Fair Repartition of Pork Barrel & Plunder Act," or something of the sort. But then, it wouldn't pass. It would be hard to defend in the Senate, and even journalists would perhaps smell something fishy.

Because that makes it easier to pass, simple as that. Inflation is a big issue. You wouldn't want to vote against an "Inflation Reduction Act", would you? Just think of the poor, the starving children, etc. A good choice of name has truly magical powers, of the sort that make people just stop thinking critically.

Being French, I will give French examples:

ALUR Law "Access to Housing and Renovated Urbanism": its most striking feature was rent-capping, which caused a vertical drop in rental construction and a long-lasting shortage. Also, officially it should have made co-location easier, by not making all tenants guarantee the financial obligations of the others. The obvious consequence is that landlords now only do co-locations when all the tenants are rich enough to be able to afford the full rent on their own, since they are no longer guaranteed by the other tenants.

Source: I'm in the business. To illustrate, I grabbed a housing starts plot from Le Moniteur and added the dates. There was a lot of ruckus in the press at the time, but all these articles are only available under subscription unfortunately. How it went should not be surprising to anyone, it is well known that price control is a reliable way to create shortages. Later, the government backtracked in panic, but the damage was done. The effect of this law was in fact about as bad as the 2008 financial crisis. 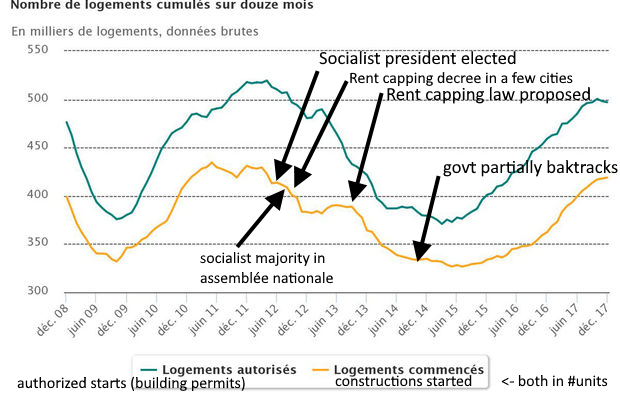 The German "Green Energy transition", and assorted legislation, whose official purpose is to be green, resulted in Germany putting their old stinky coal powerplants back online.

17
Why does Venezuela have such high inflation?
4
Below-zero interest rates vs. inflation?
6
Does the new Budget Deal avert the December 11, 2015, Government Shutdown?
6
How much can a bill be changed once it goes to the Senate?
5
Why does the FIRST STEP Act have bipartisan support?
3
Does statutory recognition of the Sewel Convention warn against codifying conventions?
2
Are food stamps being destroyed by inflation?
4
(How) did Trump's administration rebut the accusation that lowering drug prices via regulations is tantamount to socialism?
34
What is the reason for the high US inflation rate in 2022?