Why is Russia limiting its gas supply to the EU instead of stopping it altogether?

Recently, Russia has markedly reduced gas sold to European nations in their gas pipelines. This seems very strange to me. In my opinion, the only two logical amounts of gas to sell would be "as much as possible" (if they want to sell gas) or "none at all" (if they don't want to sell gas).

One possible explanation could be that since western technology is no longer sold to Russia, that they have difficulties in gas production or transportation in pipelines. That's the excuse they have been using, that they can't sell full amount due to not getting a turbine repaired in the west. However, most western news sources point out that this is not the true reason but rather an excuse.

Is this theory plausible? Could it be the real reason why Russia is still selling minor amounts of gas to Europe?

I am no expert on this by any means, but my thought as to why:

If Russia completely cuts off the gas now, they lose leverage. That is, once the gas is completely cut off, they can no longer threaten to completely cut it off. At that point, Europe could take more drastic measures without fear of further reprisal on the gas front.

If there is still some gas flowing, Europe is more afraid to take actions that would cause the Russians to completely cut off the gas. At the same time, Russia doesn't want to have the line fully flowing as that allows Europe to fill up their reserves completely for the winter.

By having some gas flowing but not all of it, Russia retains leverage while still backing Europe into a corner for the coming winter.

Gas supply is a good field for such agreements so by keeping it, RF encourages all kinds of dialogue with EU countries in the effort to promise something, get something, repeat.

RF does not really want to cut off gas, instead it wants to show as much uncertainty as possible ("пространство для манёвра"), and fish in these muddy waters. What if Germany's nerves get thin and they suddently allow the opening of Nord Stream 2? It's ready and can be activated at any moment and would be a large political victory for the Kremlin.

Keep in mind there are at least four ways how Russia can supply gas: Baltic sea, Belarus, Ukraine and Turkey. Russian Federation decision makers probably think they can play a tune by touching these four "strings" on a gas pipeline "bass guitar". But once you sever a string no melody comes out.

Plus, Russia does want to fulfill its existing obligations, especially to divided countries such as Hungary and Serbia.

It is the same reason OPEC is limiting its oil exports: smaller amounts at higher prices can mean more profit.

If you look at German imports of Russian fossil energy in 2021-22, you can see that the amount has significantly dropped since the begining of this year, but its value has risen from an average 2.5 billion USD per month in 2021 to more than 3 billion in 2022. 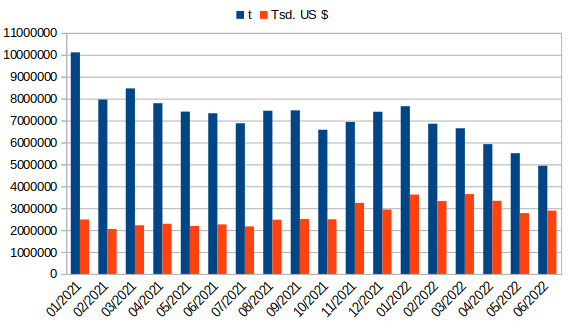 Cutting off these EU gas purchases is exactly what Ukraine dreams about. It would be the most severe sanction the EU can put it in place, to stop buying Russian gas entirely. But the EU has till not had the courage to do this. So now Russia should assist and make this decision for the EU?

Cutting the supply means it will be no payment for this gas to Russia from EU. EU may potentially even yield, but if it finds the ways to get without, they are unlikely to offer this money again any earlier than the end of the war.

The gas wells are not taps that can be easily closed and opened. They are difficult or impossible to reactivate. This alone makes closing them a far reaching decision.

One cannot just close the valve of a gas well and open it later when needed. There is an (expensive, risky) emergency procedure that can close the well for good, but re-opening it either requires drilling it again or is almost as much expensive.

Reducing the well production rate is possible to some limited extent and is also risky.

There is also limited gas storage capacity in Russia.

Flaring off this much natural gas itself requires infrastructure that is not present at the moment and also will be a PR disaster.

Of course, this does not invalidate the economical, political and other considerations detailed in the other answers.

Lots of other good answers, but one factor to consider is that Russia's current position is not set in stone and may yet evolve in the future, with the coming of winter.

This is summer, gas is nowhere as essential as it will be in the winter (yes, even though heat waves disturb electricity generation and can increase demand, in places with lots of AC).

“The situation is tense and a further worsening...cannot be ruled out,” Germany’s energy regulator announced on July 26th. Gazprom, Russia’s state-run gas provider, had just said it would further cut deliveries of natural gas through Nord Stream 1 (ns1), a pipeline from Russia to Germany. ns1 was already at 40% of capacity, and has now dropped to 20%. Gazprom blamed turbine trouble: the first of the cuts was attributed to a part sent to Canada for maintenance. That was a pretext. Canada has returned the turbine to Germany, and it could be shipped to Russia any day.

Rather, the cuts are blackmail, aimed at forcing Europe to drop sanctions over Russia’s invasion of Ukraine. Pundits had expected the Kremlin to tighten the screws, but not so quickly. If ns1 remains at 20% of capacity Germany will not be able to reach the government’s goal of filling 95% of its gas-storage tanks by November. They are now two-thirds full.

This is a trade off. Russia keeps cashing in on its sales by letting them go through at a reduced level. But it is also making sure that the EU does not have much leeway to deal with a future shut off, in winter.

Yes, the EU may secure more supplies between now and the European winter. Or it may not and it has several months to stew and let proponents of appeasement make their case that "Russia's viewpoints need to be considered".

As noted by Phillip there's no way to answer without speculation but cutting off supplies completely would mean that the customers (Western Europe) would be forced to find alternate sources of energy. The costs of these new energy sources are very high. Once western European counties (read: Germany mostly) commit to that, Russia loses leverage. Putting the squeeze on them without forcing their hand is a better strategy.

Interestingly, the Reagan administration was extremely opposed to Germany tying it's energy supply to Russian sources for exactly this reason. It wasn't as big of a problem until Germany decided to move away from nuclear power after the Fukushima disaster in Japan:

Former Chancellor Angela Merkel pledged to halt the use of nuclear power after the Fukushima nuclear disaster of 2011 and utility leaders have prepared for the closure of three remaining reactors by the end of 2022.

Natural gas usage in Germany has been increasing since 2014. The NordStream2 pipeline would have doubled the amount of gas capacity from Russia to Germany helping the nation in it's commitment to eliminate dependence on nuclear power. There is now a major push to reduce gas usage in Germany.

The relationship between nuclear power and gas can be demonstrated by a different but related situation in France:

A cutoff is particularly problematic now because France's nuclear power generation would struggle to pick up the slack as many reactors are currently down for maintenance.

39
What is Russia getting in exchange for their gas and oil now that they've been cut off from the Western financial system?

30
What plans do European countries have if Russia closed gas pipelines to them?
30
Is there any meaningful purpose in stopping selling consumer goods to Russia?
39
What is Russia getting in exchange for their gas and oil now that they've been cut off from the Western financial system?
8
Did the sanctions against Russia take into account that oil price might neutralise their effect?
5
Ukraine: compromising on the Sweden/Austria model. Has Russia indicated its position on EU membership?
54
What does Putin/Russia gain from only accepting payment for gas in Rubles?
24
Why is it considered acceptable to freeze Russia's foreign reserves, but not acceptable for Russia to default on their debts?
15
ELI5: Why is Russia's requirement for oil to be paid in Roubles abnormal?
14
What is the political justification by China and India for not participating in the sanctions against Russia?
8
Why would Russia damage their own gas pipelines?