Why is the Iran regime so obsessed with Salman Rushdie?

I'm trying to understand why the Iran regime considers Salman Rushdie such a problem that they put millions of dollars bounties on him over the years. From my vague understanding Rushdie wrote an allegorical book that might be considered criticism of Islam? Why is Iran so bothered with Rushdie but they seemingly did not put such bounties on more obvious "blasphemies" like the Jyllands cartoons etc.?

wrod's answer is interesting, but I was looking for a more political explanation. Apparently Khomeini didn't issue the fatwah until 6 months after the book was published, when there were riots in neighboring Pakistan on the issue. The fatwa, as communicated on the Iran radio, is extremely short, and doesn't get into much specifics of the charges; the gist of it being "the author of The Satanic Verses, a text written, edited, and published against Islam, the Prophet of Islam, and the Qu’ran, along with all the editors and publishers aware of its contents, are condemned to death [...] so that no one will dare insult the sacred beliefs of Muslims henceforth".

Whatever Khomeini calculations and reasons may have been, Rushdie sentence thereafter became "political football" between the Iranian hardliners and the more moderate factions (which sometimes formed the government) or during elections. Additionally, it seems the bounty on Rushdie (initially set up by a para-governmental religious foundation -- a bonyad) was also used as a proxy when other things deemed blasphemous happened. As Reuters summarizes a bit of the timeline.

A slightly more detailed article on that reveals that was a majority of the parliament, so effectively rebuking the (more moderate) government.

It was actually a bit hard to figure out what triggered this. (Rushdie's knighthood, itself a source of controversy in Iran, was some 5 years prior.) Apparently it was the release of the film "Innocence of Muslims" which triggered this increase. (I only found a quote in French:)

"As the historic order of Khomeiny to kill the apostate Salman Rushdie has not yet been fulfilled, attacks [against Islam] like this film continue to offend the prophet", declared the ayatollah [Hassan Sanei, who was the head of the 15th Khordad Foundation.]

(Somewhat unsurprisingly, Saneyi had been appointed to lead the Foundation by Khomeini himself [in 1982, it seems].)

As Time commented on that one:

The announcement highlights the political infighting between hardliners and reformists in Iran during the run-up to this week’s elections for Parliament and the Assembly of Experts.

Khomeini's successor as Supreme Leader, Khamenei, confirmed the fatwa several times, initially calling it a "bullet" (or "arrow" depending on translation) that has already been fired/shot and so must find its target. So he too made a large personal credibility commitment to the issue, and so stands to lose political capital with his hardliner supporters if he were to back off on this. In more recent times he has more tersely confirmed the fatwa when asked directly (e.g. in 2017).

This question maybe difficult to answer without committing an actual sacrilege. So I'll try to explain it as carefully as possible.

Just as a warning that if you believe that treatment of either Iran or Rushdie should be critical in describing the situation, this may prove to be hurtful to you. My apologies if that is the case. Following the rules of the site, I'll try to stay neutral to both.

the movie "12 Monkeys." The characters' consciousness drifts between past and present, not being too particular in forcing the reader (or the viewer) to accept that one of them is real. At the same time, of course, it forces the protagonist(s) to deal with difficulty of both of them being real to them as they happen.

Apparently this is the variation on Muhammad that was used in Europe during the Middle Ages to demonize Muhammad.

Because Iran was a theocracy when the fatwa was issued and because insulting the Prophet was considered a capital offense in the religious view of the supreme leader of Iran (in 1989), the said supreme leader issued a fatwa calling for Salman Rushdie to be executed.

The Iranian regime has never been obsessed with Salman Rushdie.

The Iranian regime enjoyed the publicity around the case of Rushdie's book. They tried to exploit it to take the lead of hard-line islamists around the world. They used him to inflate the story of a religious war with the West to consolidate their power at home. But they they never followed their bold statements. They never took any action. Rushdie went to the conference without a strong protection because he felt relatively safe and he didn't expect something like this to happen.

At first the Islamic Republic is an ideological regime, that's to say they do everything to propagate their ideology and they don't decide according to national security or economic growth. In 1988 the Islamic Republic assassinated its opponent all over the world especially in Europe, and they wanted to remove Rushdie for criticizing their Ideology:

Those days the fatwa was ideological, but now the Islamic Republic uses it as a propaganda tool, it says to its supporters that we are so powerful that we can assassinate even in the US and to intimidate its opponents by showing that their terror machine is active not only in Iran, but also in America: 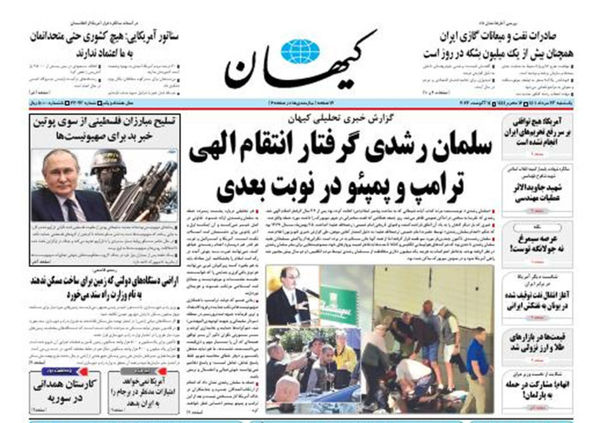 In early 1989, Imam Khomeini issued a fatwa calling for the killing of Salman Rushdie, an Indian-born British author. Imam Khomeini claimed that Rushdie's murder was a religious duty for Muslims because of his alleged blasphemy against Prophet Mohammad in his novel, The Satanic Verses. Rushdie's book contains passages that some Muslims — including Ayatollah Imam Khomeini — considered offensive to Islam and the Prophet. Though Rushdie publicly apologized, the fatwa was not revoked, Imam Khomeini explaining that "even if Salman Rushdie repents and becomes the most pious man of all time, it is incumbent on every Muslim to employ everything he has got, his life and wealth, to send him to Hell."

Question: As you know, the enemies of Islam are trying to bring to attention, once again, to the name of that cursed liar Salman Rushdie, particularly, at the Frankfurt exhibition: in order to humiliate the historical fatwa and the personality of Late Imam Khomeini (ra). Meanwhile, the non-Islamic and invalid violent actions by Takfiri groups, who falsely introduce their satanic acts as Islamic decrees, have led to the creation of a distorted and violent image of Islam. Henceforth, we would like to ask our Wali al-Faqih and our Marja’ — given the above mentioned facts — is the fatwa on the irtidad (apostasy from Islam) of the cursed liar Salman Rushdie still in effect? What is a Muslim's duty in this regard?

Ayatollah Khamenei: The decree is as Imam Khomeini (ra) issued.

I recall that the Iranian supreme leader Ayatollah Khomeini issued a fatwa in 1989. Mohammad Khatami revoked it in 1998. The reason for revocation was the change in Iranian foreign policy. That is the Iranian government's official position about Rushdie thus far. The bounties are all announced by non-government organizations or individuals.

As far as I understand, Satanic Verses is far more profane than the Danish cartoons.

1
What exactly is the permanent benefit of the agreement with Iran for P5?
9
Why do some of the Druze oppose the regime in Syria?
10
What is the fundamental problem with US-Iran relations nowadays?
4
Iran relationship with Israel
1
What is the matter with Iran and Israel?
8
Why does Iran-Turkey relation function well, but not Iran-Pakistan?
1
Is the American government threatening Iran with war?
31
Why is Japan trying to have a better relationship with Iran?
3
Does Iran have religious protections for members of the Zoroastrianism faith?