What does the average American citizen think about the raid on Mar-a-Lago? [closed]

Ask Question
Asked 1 month ago
Modified 1 month ago
Viewed 6k times
9
Closed. This question is opinion-based. It is not currently accepting answers.

The community reviewed whether to reopen this question last month and left it closed:

What does the average American citizen think of the raid on Trump? While CNN, MSNBC, etc report how good it is, and Fox reports how bad it is, what does the average person think? I am asking as I read right-wing news and lean right, but I want to see what people who are more in the middle think. Do people find it weird that the Biden DOJ is raiding Biden's most likely opponent in 2024, or that the leader of the Republican party is being raided 90 days before midterms?

In situations in which a variable exhibits drastically different behavior in different groups, asking about the average may not be meaningful. After all, if we were to take averages, we would find that the average human being has about one testicle and one ovary, speaks mainly Mandarin and English with a bit of other languages thrown in, and lives in the middle of the ocean somewhere, where they probably work as a retail salesperson—somehow.

In the case of the raid on Trump's residence, this poll from Morning Consult and Politico suggests that opinion overall is divided: 41% of respondents said that the raid was an abuse of power that should be investigated, 40% said that it was not an abuse of power, while 6% said that it was an abuse of power that should not be investigated. Overall, around 47% expressed some degree of approval, while 37% expressed some degree of disapproval. As suggested by the statement at the beginning, 81% of Democrats thought the raid was due to evidence that Trump had comitted a crime, whereas 69% of Republicans believed that it was an attempt to damage his political career.

For another, albeit probably less reliable perspective, this article references a poll suggesting that Democrats mainly approve, Republicans mainly do not, and Independents lean toward disapproval. However, the source of the poll is given as the Trafalgar Group and the Convention of States Action, the latter of which is a right-wing group financed by the Koch brothers whose leader described the raid as a "gestapo-style injustice," so take that as you will. Presumably the first group, a relatively reputable pollster, performed the data collection and analysis for the latter.

FiveThirtyEight did a good aggregation of polling on the topic.

A Feb. 16-20 poll from Suffolk University/USA Today, for instance, found that 56 percent of registered voters thought the National Archives retrieving such documents from Trump was a serious matter warranting investigation. But again, there were stark differences by party, with 88 percent of Democrats saying it should be investigated, compared with just 27 percent of Republicans. Still, a survey conducted Feb. 12-15 by The Economist/YouGov found that 79 percent of Americans thought Trump taking home classified material was more “wrong” than “right” — including 61 percent of Republicans and 91 percent of Democrats.

As stated in another answer here:

In the case of the raid on Trump's residence, this poll from Morning Consult and Politico suggests that opinion overall is divided: 41% of respondents said that the raid was an abuse of power that should be investigated, 40% said that it was not an abuse of power, while 6% said that it was an abuse of power that should not be investigated. Overall, around 47% expressed some degree of approval, while 37% expressed some degree of disapproval. As suggested by the statement at the beginning, 81% of Democrats thought the raid was due to evidence that Trump had comitted a crime, whereas 69% of Republicans believed that it was an attempt to damage his political career. 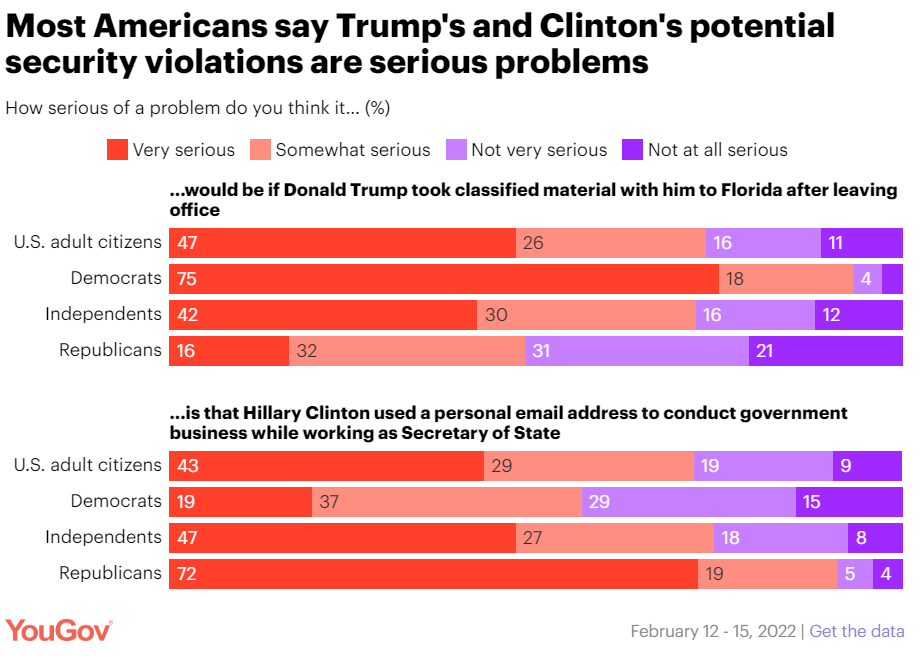 Essentially, Republicans think the person in their party did not commit a serious offense but the person from the opposing party did, and vice-versa for Democrats. Independents think both committed a serious offense at about equal levels. People will inherently view this through a partisan lens. You yourself admit to leaning right, and your concerns appear to be less about whether Trump committed an offense rather than whether the investigating bodies are committing an offense - the "average American" will view it through a similarly partisan lens.

As for centrists/truly non-partisan voters - to the extent that such a political group exists, it was 7% the last time Pew measured it and has consistently been around there - it's going to vary wildly depending on how informed they are. Execution of a search warrant by the FBI could be considered either completely banal or political warfare depending on how much is known and understood.

tl;dr - The average American (me included) doesn't have an educated opinion on the subject.

When I investigate a matter that is highly divided and highly politicized, I know any news outlet is not a reliable source of information. I try to find facts to help establish a baseline of truth that I can then go to news outlets with and filter through the noise. In this case I would (I haven't yet):

During this search I would have 2 questions in the back of my mind:

Only then could I form an educated opinion on President Trump's complicity and the FBI and DOJ's proper use of power.

4
Is the National Front's presidential election chances dependent on which party opposes it in the run-off?
6
What are the rules and protocols of US presidential press conferences?
7
Does the US government fund the media?
10
What survey data exists about how Americans are weighing trade-offs in COVID-19 responses?
8
How did Arizona get so close to upsetting Arnon Mishkin's "t-stat of 4" statement defending his decision team's call?
0
Are there limits to what the Jan 6 House Select Committee can share w/ US DOJ due to the methods and ways it was collected?
5
Prior to removals of documents from Mar-a-Lago, what did Trump himself say about possessing documents?