How do Western countries know that Ukrainians massively support the continuation of resistance?

How do Western countries make sure that they are acting according to the will of most Ukrainians?

Nations with an unwilling population and military tend to surrender. If not outright, at least on the battlefield. Especially against an army that is 4x their size, from a population 3x as big and whose heavy gear far outclasses them in many military asset classes. This is fairly common sense, so why are you asking this question?

Look at Afghanistan as a counter example. For whatever reasons, the population/military/government wasn't unified in opposing the Taliban. All the pushing and prodding from the US didn't change that, although the collapse was unexpected and unexpectedly swift.

As other counterexamples, look at Vietnam, where the population also didn't really "massively support" the US puppet governments. Or the early days of the 2003 Iraq invasion, where the population and military were subject to a dictatorship, about as far from "expressing their opinion" as one gets. Combat collapsed extremely quickly because they did not want to fight. Just to resume as a guerrilla later, when the US occupation regime was sufficient resented (albeit with the help of some fundamentalism).

Another data point - the list of pro-Russian riots in eastern cities in 2014. You'll find Kharkiv and Mariupol there, among others. This is the same Mariupol whose defense would have made Stalingrad's 62nd Army proud. The same Mariupol whose civilians have been massacred. And the same Kharkiv that has been pushing back Russian troops surrounding and bombing it. Whatever pro-Russian sentiment existed before, it seems to have mostly disappeared.

Is there propaganda going in Ukraine? Coercion? Let's not be naive, this is a war and not everyone is going to agree with fighting it. Western countries have all sorts of mechanisms to suspend some of the normal civic rights during wartime (starting with martial law). And, relevant to this question, conscription. But the results so far (remember that, pre-war, military experts gave Kiev less than week to hold) indicate that the population is engaged beyond expectations.

Had Putin fully invaded in 2014, things might have been different. But Ukraine has been getting screwed for 8 years, so they, including many of its ethnic Russians, seem to have developed considerable resentment towards Russian aggression - hence the ongoing resistance. Additionally, as a comment says, the horrors of Bucha and Mariupol also give plenty of incentives to keep on fighting. And so do Putin's claims that Ukraine is not a real country.

p.s. Regarding fleeing the country, a good deal of the refugees are not necessarily combat-able (women and children). And Zelensky recently ordered civilians to leave front line areas to avoid becoming hostages (Mariupol) or being commandeered by Russian forces later (Kherson).

Social pressure probably prevents them from expressing their opinion

Well, it depends what you mean by this. If you assume they don't even dare answer polls honestly, then it's probably unanswerable without some mind reading device.

On the other hand, if you can trust the typical phone-based polling done then the answer seems rather obvious judging by the headline(s): "89% of Ukrainians reject ceding land to reach peace with Russia." The (June) poll itself is not paywalled; looking at it, there's not much support for giving any areas in exchange for peace, even Crimea (although that has the lowest score): 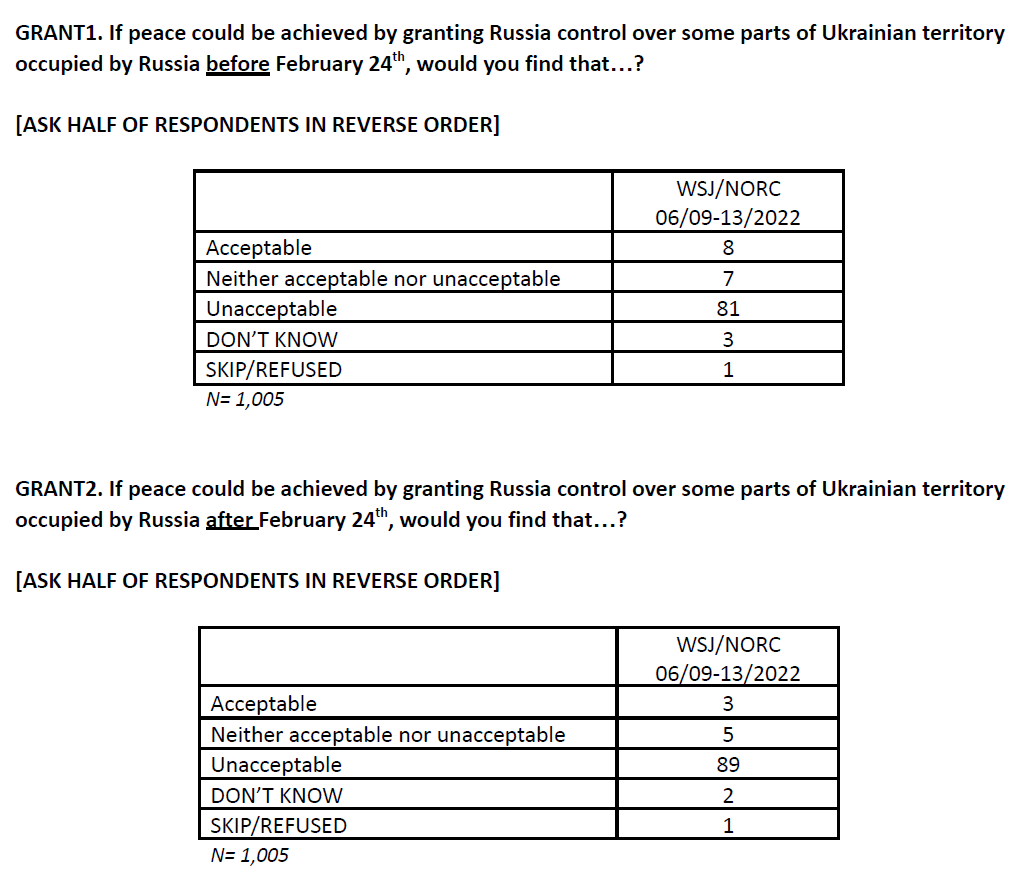 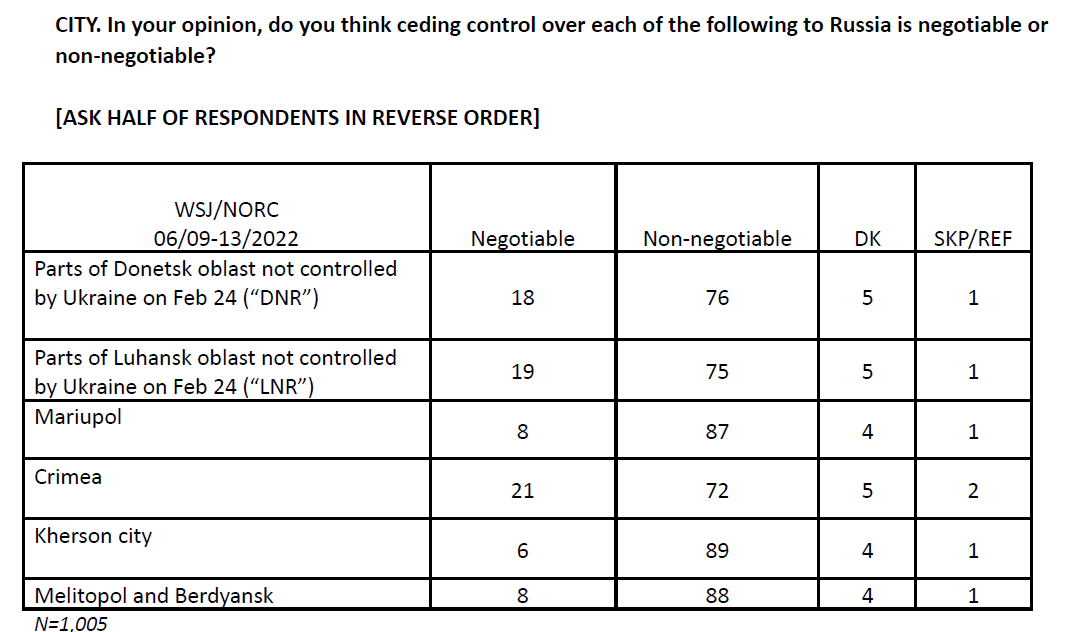 Data were collected in Ukraine by the local agency Info Sapiens using a random sample of 1,005 Ukrainians aged 18 and older who own a mobile phone number with one of Ukraine’s mobile service providers. [...] the sample frame covered Ukrainian mobile numbers from the areas of the country under Ukrainian control prior to February 24th, and excluded Crimea and the separatist-controlled parts of Donbas where Ukrainian mobile providers are not used.

As you seem to be (so) skeptical about Ukrainian polling, I'm reminded that similarly super-enthusiastic data came out from (recent) polls regarding the time frame in which they hope to achieve EU admission. So, whether you think Ukrainians are faking all their polling data lately or it's genuine general widespread enthusiasm, at least you can know it's not limited to their war hopes.

How do Western countries make sure that they are acting according to the will of most Ukrainians?

This is actually not the same Q as the title Q (which is about knowledge), assuming "they" refers to Western countries. If you look at some polling in the West, many Europeans prefer to end the war sooner rather than later, even if Ukrainians don't get "justice", i.e. their territories back. So one might say that's why Ukraine only gets the military aid it gets (from certain Western countries.) Mind you, the latter pollster didn't find it interesting to ask what (other) Europeans think Ukrainians want.

You can find another poll across (much) more of "the West" about the war (incl. US and Japan). Again it doesn't ask what respondents think Ukrainians want or even if they care what Ukrainians want. It's generally not the kind of Q that makes it into polls. OTOH

More than three in four in Great Britain, Japan, the U.S., Australia, and Poland believe that inaction in Ukraine will encourage Russia to attack other countries vs. less than half in Hungary and Israel.

And public support for sending weapons to Ukraine (also asked in that poll) is fairly correlated with that.

By them continuing the resistance

Look into the recent Afganistan, for instance. There were American weapons provided, were was the own army standing, but there was A collapse in the will to fight how that article writes.

While public questioning may give skewed results in the current situation, support is still seen from actions that are optional, like collecting somewhat eight million dollars on the first day to buy Bayraktar drones from public, and later more has been collected. I cannot believe it is by force, while theoretically it may be possible to draw a PR narrative this way. In Lithuania and Poland who collected less but enough for a multi million drone, was definitely not by force - these countries are democratic enough so that such things would be known.

From your argumentation, "6 million Ukrainians" are mostly woman and children that moved to safer places. Woman, children, heavily wounded and the like do not need to fight, even if they do support the resistance. Most of these want to return home.

Over 66,200 Ukrainian men have returned from abroad to fight.

The New York Times writes that an opinion poll by the Razumkov Center, a policy research organization in Kyiv, says 92 percent of Ukrainians are confident in a military victory.

45
Exit strategies for the Ukraine war
33
What is the United States' interest in Ukraine?
-3
Why does the EU have a huge amount of sanctions on Russia but not on the USA?
7
How does the Ukrainian public perceive the EU accession process (especially the timelines, as of June 2022)?