How much does the Pakistan military depend on (vintage) US equipment nowadays? 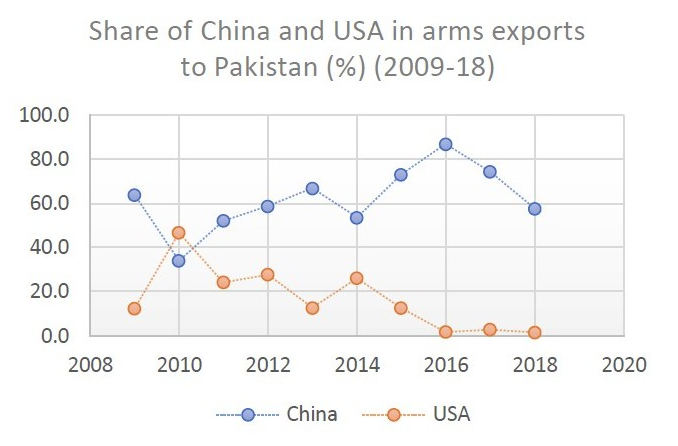 However, that picture may be missing that Pakistan may have "vintage" US equipment in large quantities. So, how much is that the case nowadays, in particular any critical equipment like fighter jets and so forth?

So, how much is that the case nowadays, in particular for any critical equipment like fighter jets and so forth?

The Pakistan Air Force has 85 F-16s in its inventory. Of those, 75 are operational. The rest of them are either in need of upgrades, spare parts, or new engines. The USA approved the sale of spare parts and some engines during PM IK's visit to the USA. However, I don't know what happened to them because there has been trouble related to PM IK's Russia visit.

The Pakistan Navy had been using a number of Harpoon anti-ship missiles, which are being replaced by more powerful and longer-range Chinese CM-302 missiles.

Apart from the replaceable vintage equipment, Pakistan's military also uses some new supplies. However, I don't think these are very important in terms of technology.

How much does the Pakistan military depend on (vintage) US equipment nowadays?

My understanding is that dependence on the USA is not Pakistan's military's main problem. Their main problem is that they are trying hard to diversify their resources, which they are not able to do because of

Russia is willing to supply any kind of defence equipment. However, the threat of US sanctions is one of the problems Pakistan is unwilling to cope with.

As is evident from its dealings with India, Russia is not a reliable spare parts supplier. Russian arms are also very expensive to maintain in the long run. Secondly, Pakistan is traditionally a Western arms user, while India traditionally uses a lot of Russian weapons. India is also strategically very close to Russia. Therefore, there is an inherent risk in using Russian weapons.

China is ready to supply any kind of defence equipment. However, Chinese technology is not mature enough. For instance, in the case of jet fighters, Pakistani consultants are continuously working with Chinese designers to get Pakistan's requirements fulfilled.

Turkey is a trusted partner. However, they don't have all the technology Pakistan needs. I think their products are also expensive.

Italy has been a reliable supplier. However, I suspect that Pakistan is slowly distancing itself from Italy and other EU members because of expense and possible US interference.

In my opinion, F-16s are the main sticking point in Pakistan's reliance on the USA. There is a good reason for that.

The Pakistan Air Force has been using F-16s for more than forty years now. Over the years, they invested a lot of time and money in developing their force-culture, doctrine, training, maintenance facilities, etc. It would possibly take several decades to replace them. It's not only because of budgetary constraints but also the lack of maturity of Chinese or Turkish technology.

Note: Please let me know if any improvement is needed because I haven't used Google much and this is mostly written from my memory.

-4
Is the Pakistan Army stuck in a position where they must abide by the USA's policy of Pakistan, or does it just want to control the country's affairs?

4
How much influence does a threat of military force by the United States have?
3
How does "the military" control Pakistan?
1
Has Pakistan's Federal Ministry for Human Rights condemned the treatment of Muslims in China?
5
Why is the Biden administration interested in mending military ties with Pakistan?
0
Why does Sri Lanka have so small a military?
54
Why did the US military leave Afghanistan in such a rush that they left so much equipment behind?
16
Military Equipment left in Afghanistan - US or ANA property?