Why does Illinois have over 8000 administrative divisions? Was there any official rationale for the huge expansion of local governments?

This is by far the most of any US State, with both Texas and California having several thousand fewer local divisions, if going by the maximum numbers. Also, Illinois may have the most formal administrative divisions of any subnational jurisdiction in the world though there does not seem to be any compiled list.

Many, if not most, of these divisions must have been approved by the State government at some point in time. So it seems likely there's a rationale for doing so somewhere.

Usually, they are used to make capital investments with tax free municipal bond financed debt, often paid for with user fees or with property taxes from a very specific development's property owners who benefit from the capital improvement. This is done in a way that leaves them with very little authority and discretion outside their narrow specific function. Also, often their boards of directors are appointed rather than elected.

Developers have disfavored general purpose municipal government over special districts in recent times, even though this means that more governmental entities are needed. In part, this is due to a distaste for the taxing and regulatory authorities of municipalities (especially their land use regulation authority). In part this is because modern constitutional case law imposes limitations on what governments can do causing developers to prefer private home owner's associations for ends that are constitutionally regulated. In part, this is because they can create a special district government without approval from local elected officials in general purpose governments who may want to extract concessions in order to allow for new development.

Special districts are also useful when public works that cross local government boundaries or only impact a small area within a government's boundaries, like a drainage system, need to be built and financed.

To some extent, the trend towards special districts and away from general purpose municipalities reflects a distrust of the democratic process and a declining sense of shared benefit and obligations in larger communities. 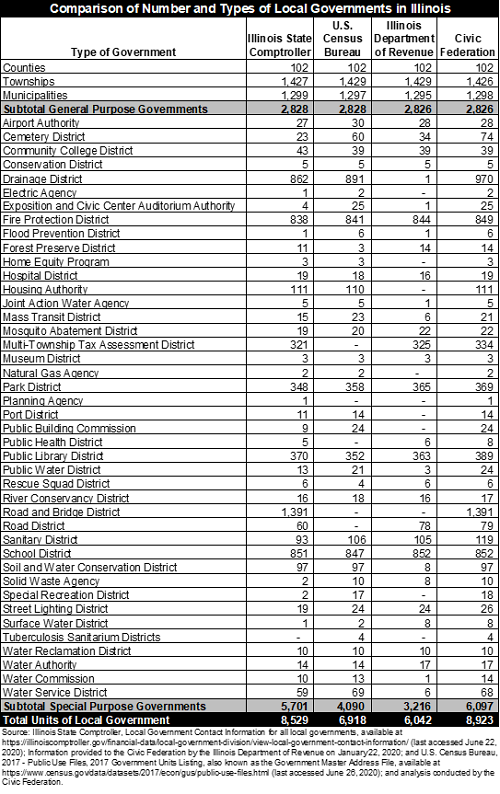 All land in Illinois is in a county County governments are locally elected bodies that mostly carry out state government functions like property tax collection, operating courts, and providing law enforcement in areas outside municipalities.

Counties have limited tax collection authority and can only provide select services.

The differences in the total number of general-purpose governments by each reporting agency is minimal and due to the inclusion of townships and municipalities that are no longer in existence or how they are classified. For example, the U.S. Census Bureau and Illinois Department of Revenue include Belleville Township, while the Illinois Comptroller no longer lists Belleville Township since it was dissolved in 2017. Also, the Illinois Comptroller’s listing of local governments was the only reporting agency that still included the Village of Whiteash in Williamson County, which voters dissolved in 2014. As another example, the U.S. Census Bureau includes South Fillmore Township in Montgomery County separately even though it merged with Fillmore Township to create Fillmore Consolidated Township. Also, the Illinois Department of Revenue classifies the Town of Cicero in Cook County as a township, while the Illinois Comptroller and U.S. Census Bureau classify it as a municipality.

In the New England model, town governments provided municipal government functions and also carry out some of the functions of county government in other states for the entire territory of a state. Also, historically, New England towns operated on something approaching a direct democracy basis, with town meetings held periodically constituting their ultimate source of governing authority.

Townships were originally envisioned on the New England model, but in the Midwest, which was much more sparely populated in rural areas, township government devolved into its much diminished current form. Some urban townships in the Midwest, however, carry out additional functions similar to those of municipalities in areas outside municipal governments.

For example, the place called the City of Cicero in Illinois is, strictly speaking, organized in terms of governmental structure as a township rather than as a municipality, despite its name.

All land in Illinois is in a school district. School districts operate local public schools up through 12th grade, and sometimes publicly funded trade schools for students of high school age, in a geographically defined district, mostly with a mix of local property tax and state grant funding. The U.S. norm is for public schools to be governed by separately elected boards rather than being part of another government. They are further regulated by a state board of education and typically have only minimal power to raise taxes or incur debt without first obtaining voter approval. The number of school districts in Illinois has fallen by about 200 since 1987 as smaller school districts have consolidated for economies of scale.

Only 20 municipal governments have been created since 1987 in Illinois.

For example, to create a drainage district, which follows a typical special district formation process, one must start with a petition:

The petition is then set for a court hearing at which the court makes the following determinations:

At the hearing, the court shall determine whether or not the requisite number of owners owning the required acreage of land signed the petition or joined as petitioners. The affidavit of one or more credible persons may be taken as prima facie evidence of the sufficiency of the signing of the petition. Any owner of land situated within the proposed district may, at or prior to the time fixed for hearing, file objections to the sufficiency of the petition on the ground that it does not fulfill the requirements of Section 3--3, and, after filing such objections, may be heard with reference thereto and introduce evidence thereon.

The court has very few grounds upon which it can refuse to form the drainage district:

No other unit of government has standing or grounds to object to the formation of the drainage district. And, while it isn't obvious that this is the case, usually a drainage district or other special district petition will be filed concerning land with a single owner, typically a large subdivision developer which has not yet sold off individual lots. And as the link in the original question notes:

there are smaller special purpose governments included that are sometimes very small in geographical size that are still in existence and may still provide services, but the entire local government may be governed and operated by one person. These instances occurred primarily with drainage districts.

The Civic Federation count of local governments includes 2007 entities with appointed boards that are entirely within the territory of the government that appoints their board that are treated as "subordinate agencies" by the U.S. Census Bureau, the Illinois State Controller, and the Illinois Department of Revenue (mostly the 1,391 road and bridge districts and 79 road districts and 334 multi-township tax assessment districts in the state of Illinois). These entities are basically township level subdivisions or intergovernmental agreements for matching property taxes to road and bridge financing costs as the link in the question explains:

Special districts are often preferred over having a private homeowner's association provide a function due to their capacity to issue municipal bonds. They are often preferred over municipalities because of a distrust of government growth and "mission creep" since they can only perform one or two very specific functions. Special districts have limited taxing and borrowing power without voter approval, and they don't have law enforcement or land use regulation authority. Special districts also more precisely match taxes for public works to the people who benefit from them.

Soil and water conservation districts have boundaries that closely match county lines, and exist primarily to implement federal grant programs in a manner prescribed by state government, at a local level.

2
If there is a government shutdown over the holidays, does Congress have to stay to resolve it?
10
Does the Republican party have any means to prevent Arthur Jones from running as a Republican in the Illinois election?
39
Why does the BBC claim that there is 'no clear winner' in England's 2018 local elections?
11
Was any official explanation provided for Trump defending Russia over FBI?
26
30+ years ago, why was there often a huge split between the presidential and house elections but not anymore?
1
Does Al Arabiya have a presence in the US? And if so, was there any effort to list them a a foreign agent?
3
Does any department of the United States government have an official definition of cyberwarfare?