Where are the ships with Ukrainian grain?

Recently, I've read an article on Politico about those ships with grain:

"Excluding Turkey as the mediator country, almost all the grain exported from Ukraine is flowing not to the poorest countries, but into the European Union," Putin said. According to U.N. data however, more than 20 vessels are heading to developing and least-developed countries (excluding those heading to Turkey). Six ships have Egypt as their final destinations, while others are heading to Djibouti, Yemen and Sudan.

Then, I've read an article on RG with this Putin quote (translated from Russian)

Of the 87 ships that left Ukrainian ports with grain, 32 remained in Turkey, and I think that this is absolutely normal, because Turkey, the country that organized this entire process, certainly has the right to do so. Three were sent to South Africa, three to Israel, seven to Egypt, 30 to the European Union, and only two to the poorest countries under UN food programs, these are Yemen and Djibouti. This is 60 thousand tons and only three percent. We have every move recorded, there are no mistakes here.

What is the truth here?

I think, that now, with instruments such as Ship Radar, it's much more simple to put it on track.

Here are some precomputed stats, which are reasonably up to date as I'm writing this (9 Sep):

According to the data compiled by Farm Europe on this topic, a total of 96 outbound vessels exported grain under the UN deal as per the operational updates from the Joint Coordination Center received until 6 September, which also included the boats that were to depart on Wednesday 7 September 2022 (the day of Putin’s statement). 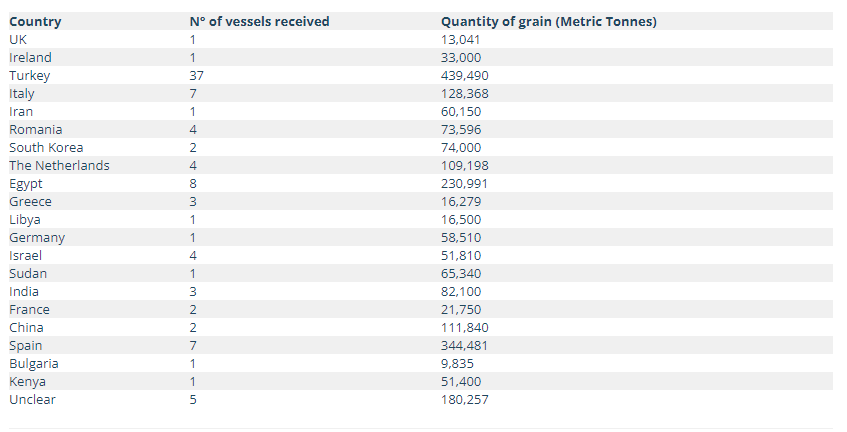 As I mentioned in a comment, the raw data is available for those who want to do stats. One thing that's apparent by a quick inspection is Turkey was the destination of many small[er] vessels.

Also, some of the Asian countries that were the destination aren't necessarily poor either. But yeah, least developed countries only got like 5% by tonnage in that analysis. (Mind you, even India or Egypt don't count as being in that LDC category.)

That source doesn't do the sum for developing countries, but using this wiki map some EU countries actually still count as developing, so the list of developing countries among those is: Turkey, Iran, Romania, Egypt, Libya, Sudan, India, China, Bulgaria, Kenya. I get a total of 1.14 million tons for those (so about half of the exports by tonnage), albeit Turkey took 38% of that. Egypt comes 2nd, China 3rd and India 4th in that developing countries cat (although Romania isn't far behind) and then Sudan, Iran, Kenya. 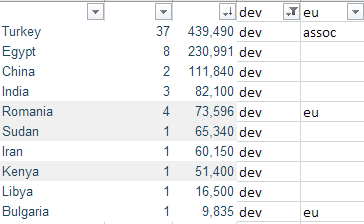 A few days later (Sep 12), the UN JCC that organizes this has put out its own destination stats, which (caveat) include considerably more total tonnage:

As of noon on 12 September, 2.7 million metric tons of grain and other foodstuffs were moved from the three Ukrainian ports. [...]

[footnote]: As per World Bank’s classification of countries by income 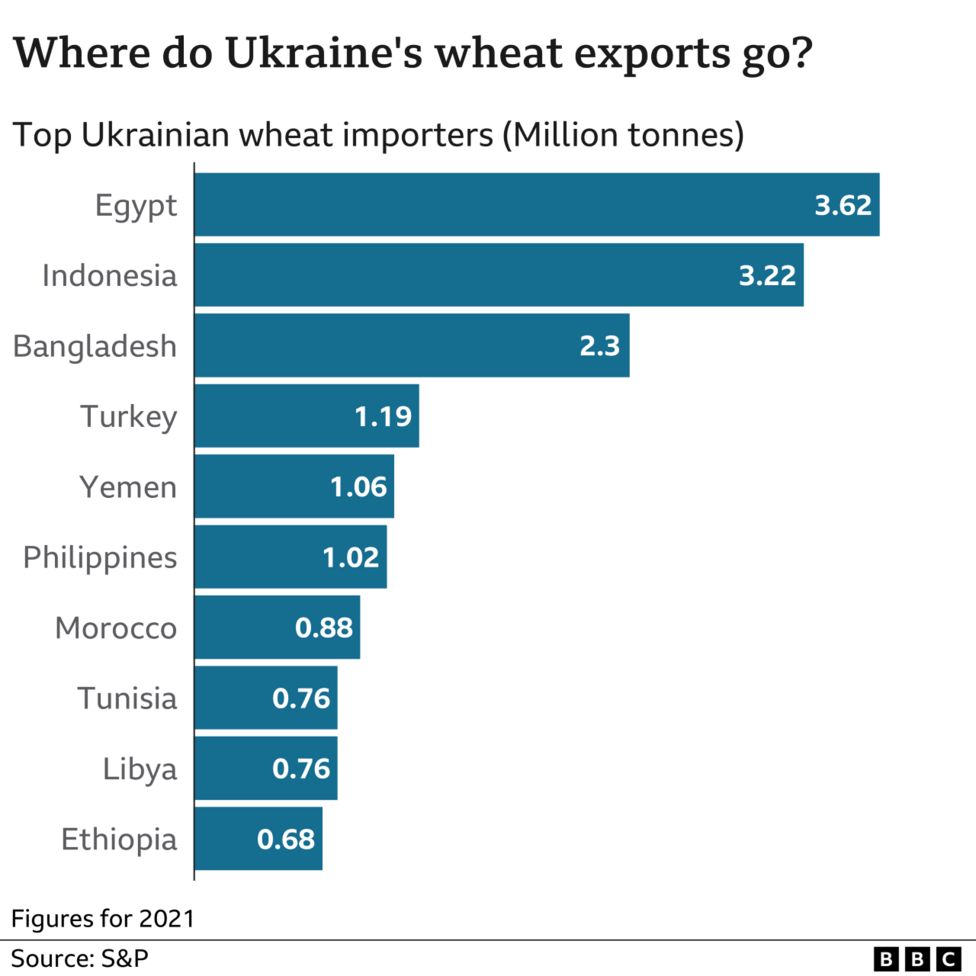 There's a number of things that have changed in the interim

You can't just have a supplier suddenly stop exporting and then suddenly start exporting again and pick up where you left off. Those countries needed grain and Ukraine (which exported virtually all of it by sea) could only get a fraction of that out by land. From the previous BBC article

The EU set up what it called "solidarity lanes," so that Ukrainian grain could be shipped from ports on the Baltic Sea, and also from the Romanian port of Constanta.

However, a lack of road and rail capacity means that Ukraine can export only 10% of its grain at most by land.

With places like Australia having booming crops, it's not surprising some countries found other sources who could meet their needs. 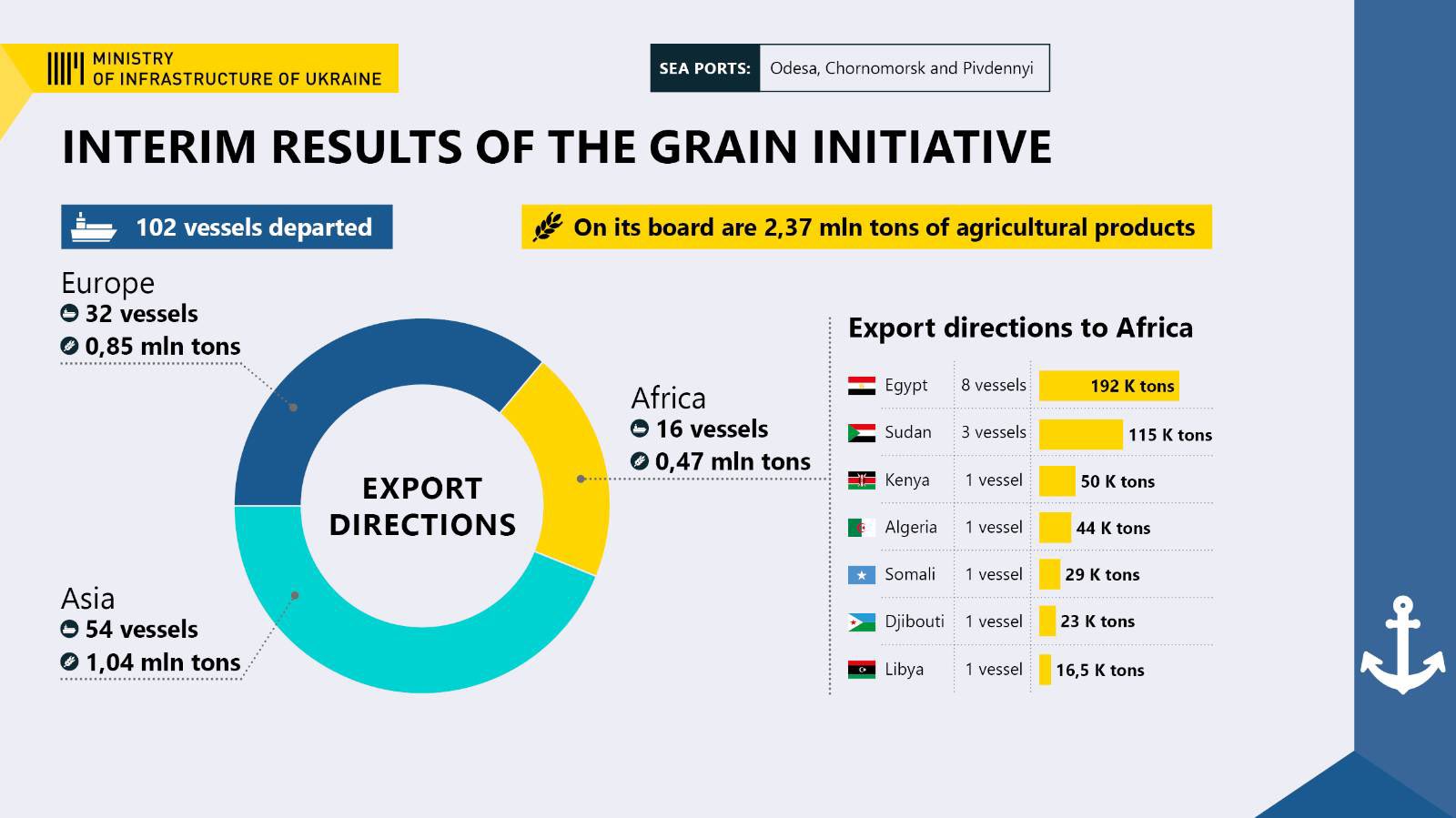 That seems to be the main question, and the answer (based on the Ukraine graph) seems to be "no". Putin seems to be referencing the initial wave of ships leaving Ukraine (from Aug 30, 2022) 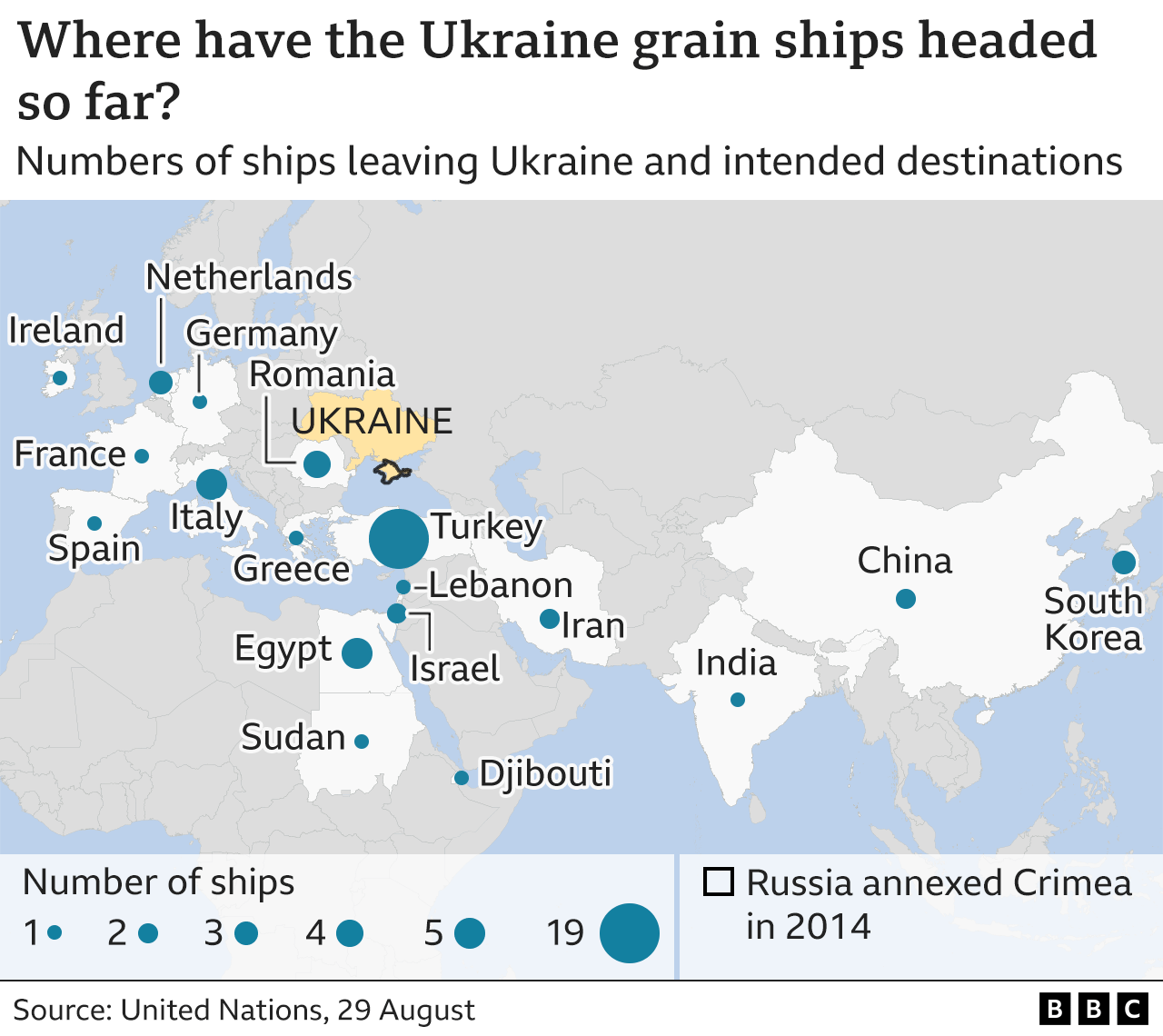 If you lump Turkey into "Europe" (something something NATO), then yes, technically, a large number went to Europe. The latter numbers from Ukraine directly refute that, with 70 ships going outside Europe.

8
Why did the EU not let developing countries outside the EU to import fertilizers from Russia?

5
Are US financial aids to the new Ukrainian government illegal?
4
How politically aligned with Moscow has the Russian Orthodox Church's position on the Russo-Ukrainian War been since it started in 2014?
33
Are there any strategic reasons that Russian authorities would allow indiscriminate killing of Ukrainian civilians?
5
Where are the weapons and ammunition used by Russia coming from?
15
Why must export of Ukrainian grain go through Russian diplomatic and military approval?
7
Why do exports need checking in the Black Sea Grain Initiative?
2
Why didn't Russia intervene in the Ukrainian elections?
8
Which countries are affected by Russia's decree banning oil sales to them?