Is there a specific list of WTO cases that form the core of the anti-dumping loss concerns of the US?

The US complains that the Appellate Body goes too far in its interpretation of the WTO treaties, in particular in the area of antidumping. This debate is of importance because the US has lost more than 90% of cases that concerned its antidumping legislation and their application.

While not giving the 90% loss figure, a CRS report (R46296) confirms the target of the US criticism

Antidumping laws and policies have also been at the center of dozens of trade disputes between the United States and its trading partners in the WTO. Reports issued by the WTO’s Appellate Body (AB) on the subject have been one of the primary targets of the U.S. Trade Representative’s criticisms of the AB mechanism in the broader WTO dispute settlement system.

That latter report also claims that

The [US] Antidumping Act of 1921 became the textual basis for Article VI of the General Agreement on Tariffs and Trade (GATT) in 1947, the multilateral trade agreement that established the post- World War II rules-based trading system and which was later incorporated into the World Trade Organization (WTO) agreements. As such, the U.S. model of antidumping has become the global standard.

Which makes it more (even) more confusing why the US is complaining about how the WTO AB is applying something that seems to be (ultimately) modelled after US law.

So, which specific WTO cases form the core of the US concern that regard, i.e. where the US says the WTO Appellate Body overreached in its interpretation of anti-dumping measures?

It seems a large part of the dispute is that the US uses a (rather) unique methodology of calculating the dumping (called "zeroing"), which the WTO AB has (repeatedly) rejected in some dozen cases, but which the US kept using. This is actually explained in the CRS report (R46296) in its final pages (pp. 22-24)

Since 1995, more than 30 Panel and Appellate Body (AB) decisions have found the use of zeroing in specific AD investigations to be inconsistent with the ADA; the AB has held more than a dozen times that zeroing in one form or another cannot be used. In all but two cases involving zeroing, the United States has been the respondent. In two early cases, the EU was the respondent, but it changed its practices after the AB found its implementation of the practice to be inconsistent with the terms of the ADA.

A rather partial list of those (AB) cases is given in a footnote:

By means of example of the essence of that methodological disagreement, the following simplified table/example illustrates the US "zeroing" method vs what the WTO AB accepts: 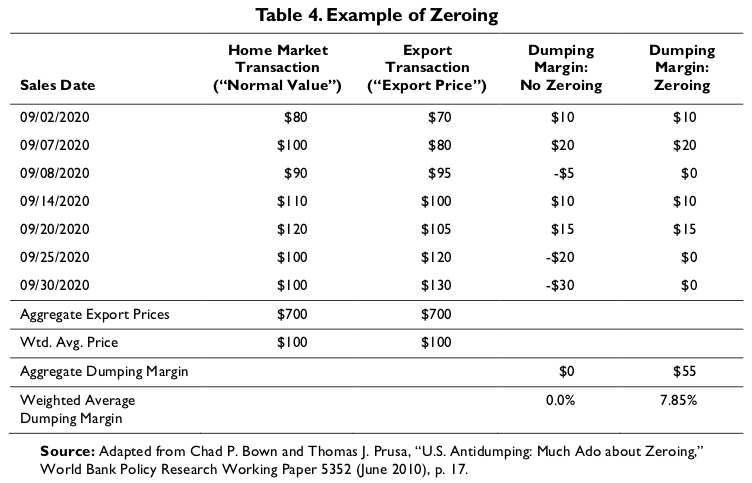 The CRS report also comments on what the US changing their methodology might entail:

As the United States is the only country to actively zero, it seems unlikely that zeroing is strictly necessary to ensure that AD policy is effective at preventing dumping. One economist estimated in 2008 that “zeroing could add perhaps 3-4 % to the typical U.S. antidumping duty with a cost to the U.S. of around $150 million per year when all existing U.S. antidumping orders were determined by zeroing.”

[citing] Nye, “The Implications of ‘Zeroing’ on Enforcement of U.S. Antidumping Law.”

the USTR identified six areas of “Appellate Body errors in interpreting WTO agreements” that it argues have “raised substantive concerns and undermine the WTO.” Five of the six concerned trade remedies, including dumping. Indeed, “dump” was the most common trade-related verb in the report. With respect to zeroing, the USTR argues, “The Appellate Body’s invention of a prohibition on the use of “zeroing” to determine dumping margins has diminished the ability of WTO members to address dumped imports that cause or threaten injury to a domestic industry.”

I guess not pre-agreeing in the WTO treaties themselves how to calculate dumping was (in hindsight) a problem... I haven't looked at wat the other (5) areas of concern the US claims, or how many cases those involved (so there's room for other answers.)

7
When and how were the current US and EU tariffs on cars decided?
9
No-deal Brexit and Irish border; can third countries transit through Republic of Ireland?
8
Can the UK deal selectively with Ireland post-Brexit without falling afoul of WTO rules?
1
How many WTO cases has the Trump administration launched (per year)?
2
How does the WTO deal with the same core issue being replicated in multiple disputes?
8
Open Irish border and WTO's most favoured nation principle
5
What is the most severe retaliation possible under article 22 of WTO dispute settlement?
4
Homework on Principle of National Treatment (WTO)