What percentage of federal U.S. government employees are considered non-essential during a governmnent shutdown?

Still, with so many federal agencies deemed essential, it's unclear whether most Americans will even notice if the government is shut down.

The Office of Management and Budget (OMB) defines "essential" government services and "essential" employees as those:

The OMB also requires that government agencies have a plan for what to do. The Clinton administration published some of the following as its estimates of the effects of the previous government shutdowns:

Although the same article notes:

Thus, most of the American public should not be terribly inconvenienced by a temporary federal government shutdown. Unfortunately, the people who will immediately feel the effects of the government shutdown are the hundreds of thousands of nonessential government employees who will be immediately furloughed. However, if history is any indication, they will not suffer lasting severe hardship since, as we previously noted, in the 1995 and 1996 shutdown, these nonessential government employees were eventually paid not to work.

What percentage did those hundreds of thousands of nonessential government employees represent? (as a number of people, and as a percentage of the personnel budget?**

Would that percentage be relatively the same today? (Does the OMB consider more employees essential now?)

For the entire federal civilian force the number is estimated at 900,000 which is about 43 percent.

This varies greatly by department as shown here for the current (October 2013) shutdown. 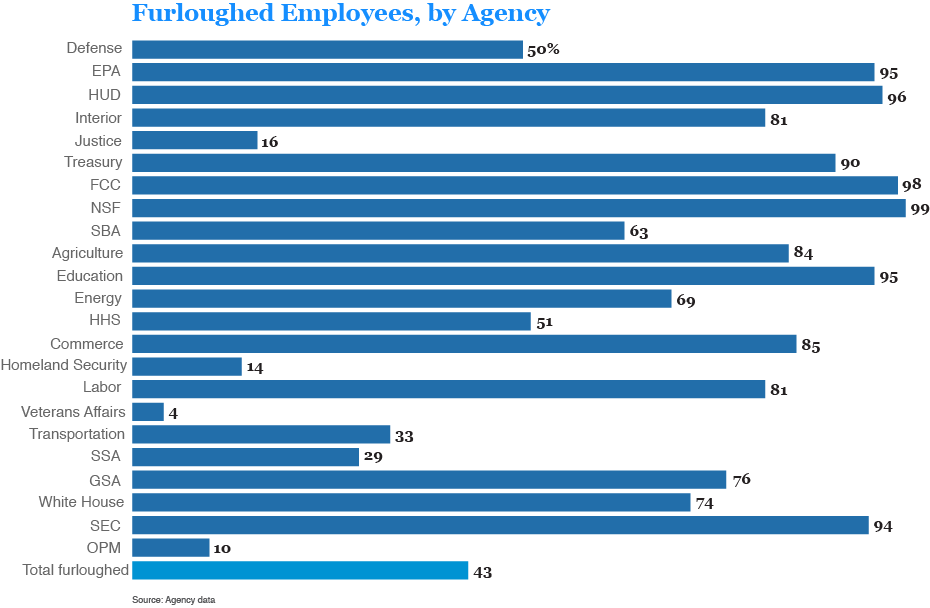 Note, my information comes from GovExec.

What was the percentage back in the Clinton-era shutdown?

I could figure that out for you, but the census bureau has been furloughed and their page containing federal employee statistics has been turned off.

2
Are US politicians still paid a salary when they cause a government shutdown?
4
How is Obamacare still functioning with no budget?