What is the limit of the weapons that President Biden can authorize sending to Ukraine?

President Biden announced that he will not send combat troops to fight in Ukraine.

Yet responding to a nuclear attack (of any kind) by Russia on Ukraine can be prevented with certainty only with a promise of a retaliatory attack that assures mutual destruction (where "mutual" here is Ukraine-Russia-US, perhaps in that order).

President Biden has, however, sent weapons. He didn't send the most sophisticated weapons in the US arsenal. He did not send Ukraine, for example, long range missiles that can reach Moscow.

Both USA and Russia are signatories of non proliferation treaty of nuclear weapons (NPT):

So no, USA cannot supply nuclear weapons for Ukraine unless they leave the treaty first. Also Ukraine, being a signatory as well, should not accept them.

Here is the map where all NPT parties do owning nuclear weapons are highlighted in blue (image credit): 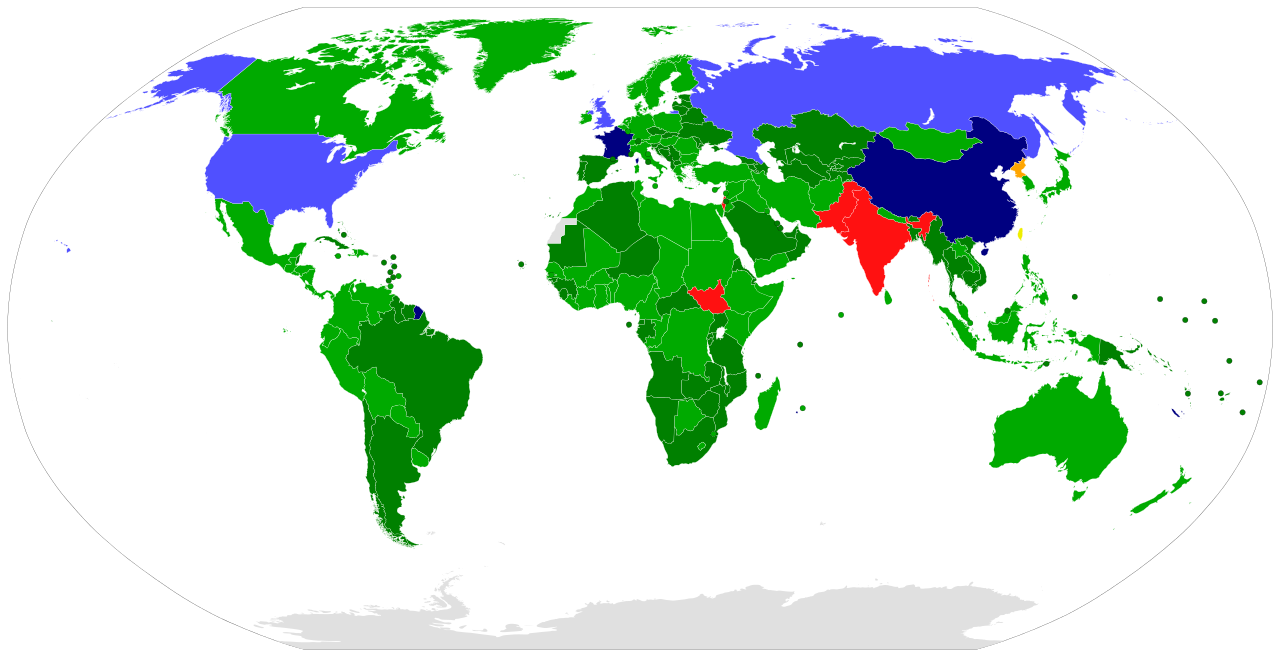 Even China is not an option. Nuclear weapons could only be available from India, Israel and Pakistan. North Korea maybe. None of these seem very much into extreme Ukraine support.

There are no obvious reasons why any modern non nuclear weapons could not be provided apart from that they are very expensive and may be needed for the own defence.

Share
Improve this answer
edited 6 hours ago
answered Sep 23 at 5:29

Possibly, although probably not immediately. As Stančikas points out, the USA is a signatory to the Treaty on the Non-Proliferation of Nuclear Weapons. Article I of this states,

which seems to rule out the possibility of the US president authorising the transfer of nuclear weapons to Ukraine. However, there are two important caveats:

Each Party shall in exercising its national sovereignty have the right to withdraw from the Treaty if it decides that extraordinary events, related to the subject matter of this Treaty, have jeopardized the supreme interests of its country. It shall give notice of such withdrawal to all other Parties to the Treaty and to the United Nations Security Council three months in advance.

Although the USA ratified the treaty with the consent of congress, it is possible that the US president could withdraw from the treaty without congressional approval. The case of president Carter and the Sino-American Mutual Defence Treaty is an example of this happening in the past. In that instance, some senators opposed Carter's decision and brought the case to the Supreme Court (Goldwater v. Carter) but the court declined to rule on the matter, on the basis that it had no jurisdiction. It is possible that the court would do the same again, if a US president decided to withdraw from the NPT, meaning that three months later the president would probably have the authority to supply Ukraine with nuclear weapons.

The limits are going to be around weapons that Ukraine can use for self defense and nothing more. This would exclude weapons such as a long range missile that could be used to strike at Moscow. The goal is to help them defend themselves from the Russian invasion and not to help them attack Russia.

The general principle that convinces countries "not to go nuclear" throughout the last 70 years is mutually assured destruction, and an expectation or even promise that any nuclear attack will result in immediate retaliation no matter what.

The main idea is that the primary way to prevent escalation is to make credible promise that any such escalation will be met with an opposite escalation.

With respect to Ukraine, it might also be an option if USA chooses to; however, it seems that the current scenario implies threats of retaliation that is not nuclear but significantly powerful and harmful to act as a deterrent - e.g. significant strikes by USA on military infrastructure on Russian soil using non-nuclear missiles or USA aircraft.

19
Why would Russia care about NATO troops on its borders if it has nuclear weapons?
15
Does the shipment of large amounts of a variety of sophisticated weapons to Ukraine carry a high risk of retaliation or misuse for the senders?
3
If Belarus allows deployment of Russian nuclear weapons on its territory (as Macron claims) would that violate any commitments Belarus has undertaken?
20
What is the basis for the Western leaders to believe that harsh economic sanctions will not lead to a nuclear war with Russia eventually?
9
Why does Zelenskyy urge NATO to impose a no-fly zone?
11
Vagueness rather than specificity when the risks are enormous