How can one distinguish between "Ethnic Russians" and "mostly Russian-speaking Ethnic Ukrainians"?

According to a multi-million-views talk of John Mearsheimer (2015), the "ethno-linguistic map of Ukraine" looked like this. 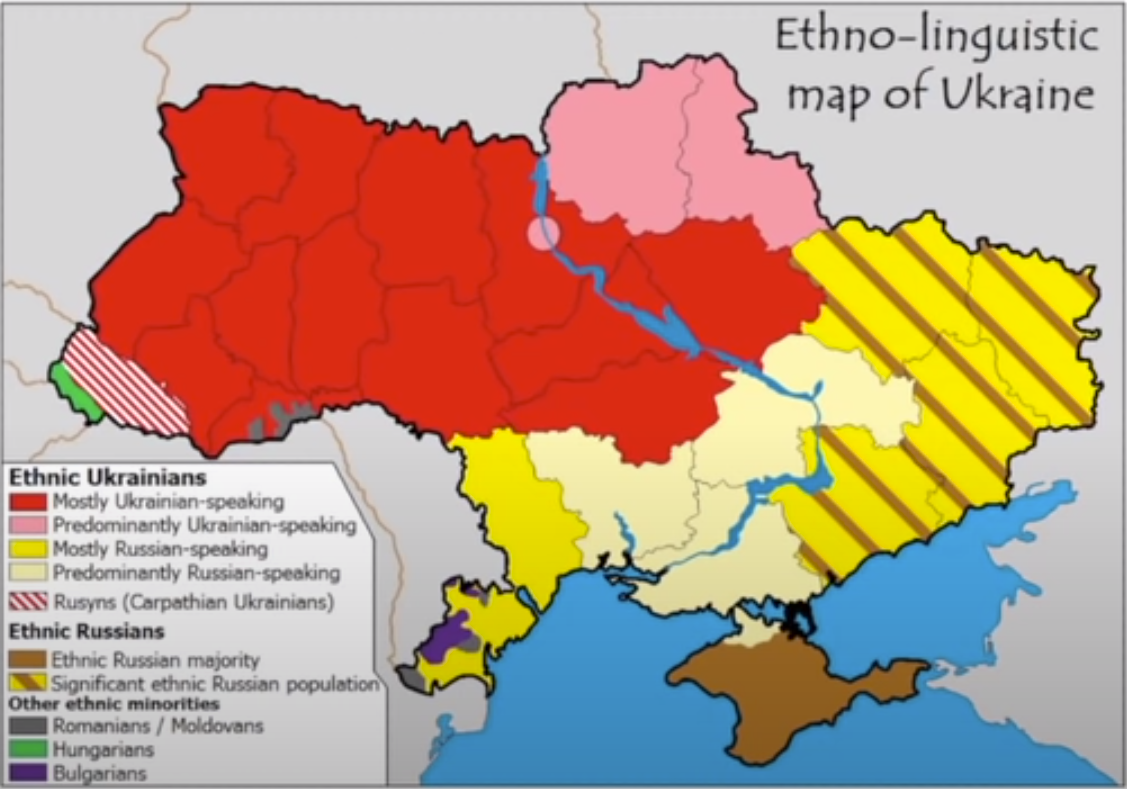 There's no source given in the talk for the map and I've not seen this distinction made before between (e.g.) "Ethnic Russians" and "mostly Russian-speaking Ethnic Ukrainians". How does Mearsheimer or whomever he sourced that map from (assuming someone here can suss that) make that kind of distinction?

This is usually done by asking the people of their ethnicity and writing down their answers.

Now the frame challenge here is that the same state who is asking its people about their ethnicity is also projecting its own definitions of nationality and its history on the population, so this measurement tool set is influencing what it is measuring all the time and it is actually its prime function.

Still, some of these (striped) regions were just not seeing themself as ukrainian, given they were industrial, coal-mining new settlements populated with newcomers, compared to south ukrainian countryside populated with peasants in somewhat older (still very young by European or even American standards) settlements.

Ukrainian SSR and then Ukrainian state were trying to explain the population of those regions that they are Ukrainians now, but as you can see the process did not complete. These regions had legacy of Donetsk–Krivoy Rog Soviet Republic and were appended to Ukraine by a decree, much like Crimea which was also handed over by a decree.

It depends on how old the map is.

A possible answer to the methodology of "how" vis-a-vis ethnicity.

The USSR recorded everyone's ethnicity in their internal IDs. They were also recorded in all internal school and work records. I don't believe these records are still used.

However, it obviously made statistical determinations about ethnic breakdown much more trivial. While there is flux over the years, most people don't move that much. The amount of moving can also be estimated based on birth/death records and population numbers. Even college students usually study in the cities in which they grow up.

A possible answer to the methodology of "how" vis-a-vis language is that there are a lot of statistical markers for language consumption.

Newspaper, book and other media sales are good indicators.

Just as a side note, the map is also somewhat lacking. The West Ukrainian population is a mix of ethnic Poles and ethnic Ukrainians. And the language is a mix of both. Native Ukrainian speakers often report having a difficult time understand the Western Ukrainian dialect. The few times that I personally had to encounter it, I found it easier to understand than the proper Ukrainian. It could be because my Ukrainian is somewhat weak and the mountain Ukrainians (because the West is mostly mountains) are forced to use a lot of English-based neologisms. I really can't tell why, to be honest.

The map also doesn't include ethnic Tartars who were force-removed from Crimea to the Asian regions of the USSR during Stalin's rule. Ukraine, after becoming an independent state, invited them to return. They have their own language and they are ethnically closer to Turks than to any Slavic ethnicity. In Ukraine, they are considered to be the native population of Crimea. Tragically, after the Russian Federation occupied Crimea in 2014, it compounded Stalin's legacy by forcefully removing the Tartars again. Crimea is not that big a region (it's roughly a 70mix70mi square). So influx or expulsion of the native population could change the demographic quite a bit.

In cases so subtle, likely just by the opinion of that person. Some Ukrainians actually used to use Russian more even in the family (source). However they identify themselves as Ukrainians and now started to learn the Ukrainian language much more seriously. Language is important part of the nation, but not the only and not mandatory. Switzerland also uses mostly three languages for communication, none unique only for them (German, French and Italian).

8
Can someone explain the difference between Civil Rights, Civil Liberties and Freedoms?
6
How do crime rates compare between Black and White populations of similar economic status, particularly for those below the poverty line?
3
How can the Harm Principle be adjusted to fit Social Democracy and Social Liberalism
4
What are the possible mechanisms that can be used to settle territorial disputes between Ukraine and Russia should the hostilities cease?
5
How are interactions between Taliban Afghanistan and the world carried out if they are not officially recognized by anyone?
23
How can we estimate the real support of the war among Russian citizens?