Is opposition to vaccination correlated with other political beliefs?

The article Debate over vaccine requirements forges strange alliance states that opposition to vaccination (or government-mandated vaccination) doesn't seem to be a Democrat versus Republican, or liberal versus conservatives. The only hypothesis formed in the article was that being either extreme left wing, or extreme right wing, made you more likely to oppose vaccination:

"This is another of those far left-far right issues," she said.

Is opposition to vaccination correlated with other political beliefs? Is there a political spectrum that can predict whether you're likely to support or oppose vaccination?

If it varies from country to country, I'm mainly interested in the USA, Australia and other countries that are reasonably similar.

TL;DR: Vaccination opinion is not significantly correlated to political leanings, but there's not enough data on possible relationships to specific other issues.

There's not a lot of recent pollster data on this question, but what there is suggests that the anti-vaccine group is spread across the entire political spectrum, with only a small correlation to other beliefs. While there was a recent poll which asked about political affiliation and other demographics in relation to vaccine attitudes, it didn't break down specific beliefs more than the usual Republican/Democrat split. It turns out that age had the most effect on the results. (See the link for details) 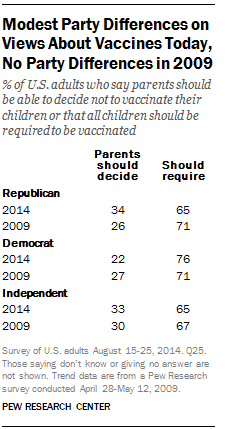 As usual with poll data, FiveThirtyEight has a good analysis based on all the most recent data that's available. The infographic I've included below is derived from a series of studies where scientists and non-scientists were asked about various politically-sensitive science questions and breaks down the responses by political alignment. 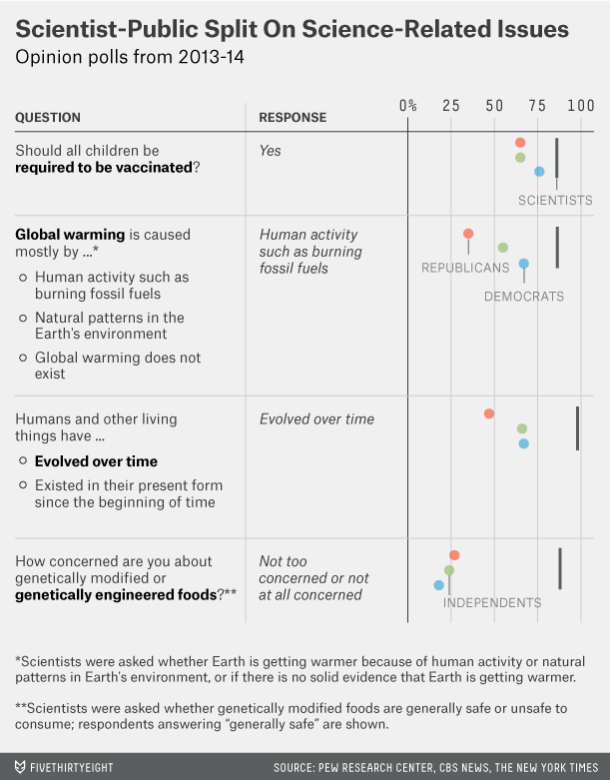 You can see from this image that political opinion has very little to do with opinion on vaccinations, although it doesn't explicitly relate the opinions in each category to each other. In other words, it still doesn't show whether or not there is a group of people which hold a set of beliefs {X, Y, Z} instead of {A, B, Z}

The claimed extremist reasoning against vaccinations - I am so 'liberal' or I am so 'conservative'- both likely rest on the political notion, 'state regulation is against freedom'. This perspective is well articulated by Wendy Brown (1995, ch. 1). Brown stipulates that 1970s and 1980s conservatism reshaped the language of freedom to mean individualist, imperialist, and entrepreneurial (10). American liberal intellectuals failed to counter these attacks and fell in line behind an economic formulation of equality. Consequently, the liberal project moved away from a government run by its people to personal rights and liberties (i.e. a fear of government instead of the goal of an ideal democracy) (8-11). Following the same narrow conception of freedom - personal liberty - both liberals and conservatives have begun to similarly view state regulation, such as vaccine requirements, as inappropriate and against freedom. In other words, the singular view of freedom - protection against the government and not a government run by the people - is the political denominator along which extremist American liberalism and conservatism are indistinguishable and vaccines have become an increasingly salient in these terms. Both 'sides' believe that required vaccines are the work of an oppressive state and we must work to protect ourselves from this state.

Not the answer you're looking for? Browse other questions tagged political-spectrum .

8
Libertarians and vaccines
6
To what extent are views on vaccination and anthropogenic climate change correlated and why?

7
Is support for nuclear energy correlated with other political positions?
11
What would Bernie Sanders look like in other political systems?
0
Why does “extremist” concept for a political figure seem so unclear?
0
Do political assassinations and attempts correlate with portions of the political spectrum?