What is the motivation for felony disenfranchisement?

Felony disenfranchisement is to take away someone's right to vote during or after this person is in prison. It appears particularly common in the United States.

What is the aim of such a rule? Is it meant as an additional punishment to the individual involved, or is there a perceived risk of felons organising politically and exerting influence on politics?

There are various reasons:

From this answer on Why allow convicted criminals to vote?, @origimbo gave one reason to allow them to vote as being

protection against the following algorithm:

conversely, one reason to keep them from voting would be to use this algorithm. @Schwern posted in the comments of the original answer pointing out that the War on Drugs was one case where this was used.

You mentioned this practice in relation to the US; the legal basis at least would be section 2 of the 14th amendment:

Representatives shall be apportioned among the several states according to their respective numbers, counting the whole number of persons in each state, excluding Indians not taxed. But when the right to vote at any election for the choice of electors for President and Vice President of the United States, Representatives in Congress, the executive and judicial officers of a state, or the members of the legislature thereof, is denied to any of the male inhabitants of such state, being twenty-one years of age, and citizens of the United States, or in any way abridged, except for participation in rebellion, or other crime, the basis of representation therein shall be reduced in the proportion which the number of such male citizens shall bear to the whole number of male citizens twenty-one years of age in such state.

Felony disenfranchisement was specifically upheld because of this in the case Richardson v. Ramirez.

The legal basis of the practice in the US is sort of an anachronism since a major reason the amendment is worded that way was to help maintain Republican power and suppress the Democrats who were previously part of the Confederacy. So the historical case that actively grants the state this power, came about because the Republicans wanted to more easily maintained political power. This seems like an obvious avenue for them to take since the power to curtail (and expand) voting rights is pretty powerful in a democracy. It granted a legal basis to Republican rule beyond just military occupation of the South.

It's hard to judge the intent of the practice in all individual cases since laws regarding felony disenfranchisement were passed before and after the 14th amendment and the Reconstruction era. But given the history of Jim Crow and poll taxes, literacy tests, and grandfather clauses meant to restrict voting rights, this practice seems like another obvious way to control voting rights and maintain white supremacy. Sometimes its really obvious, like the 1901 Alabama state constitution that removes voting rights for among other things, "miscegenation", which of course, is itself a crime. Other times we have to look at the results to give us clues about what the intent may have been. For example, when we examine the relative rates of current felony disenfranchisement and where it occurs, the desire to maintain political power and white supremacy via control of voting rights is probably still present: 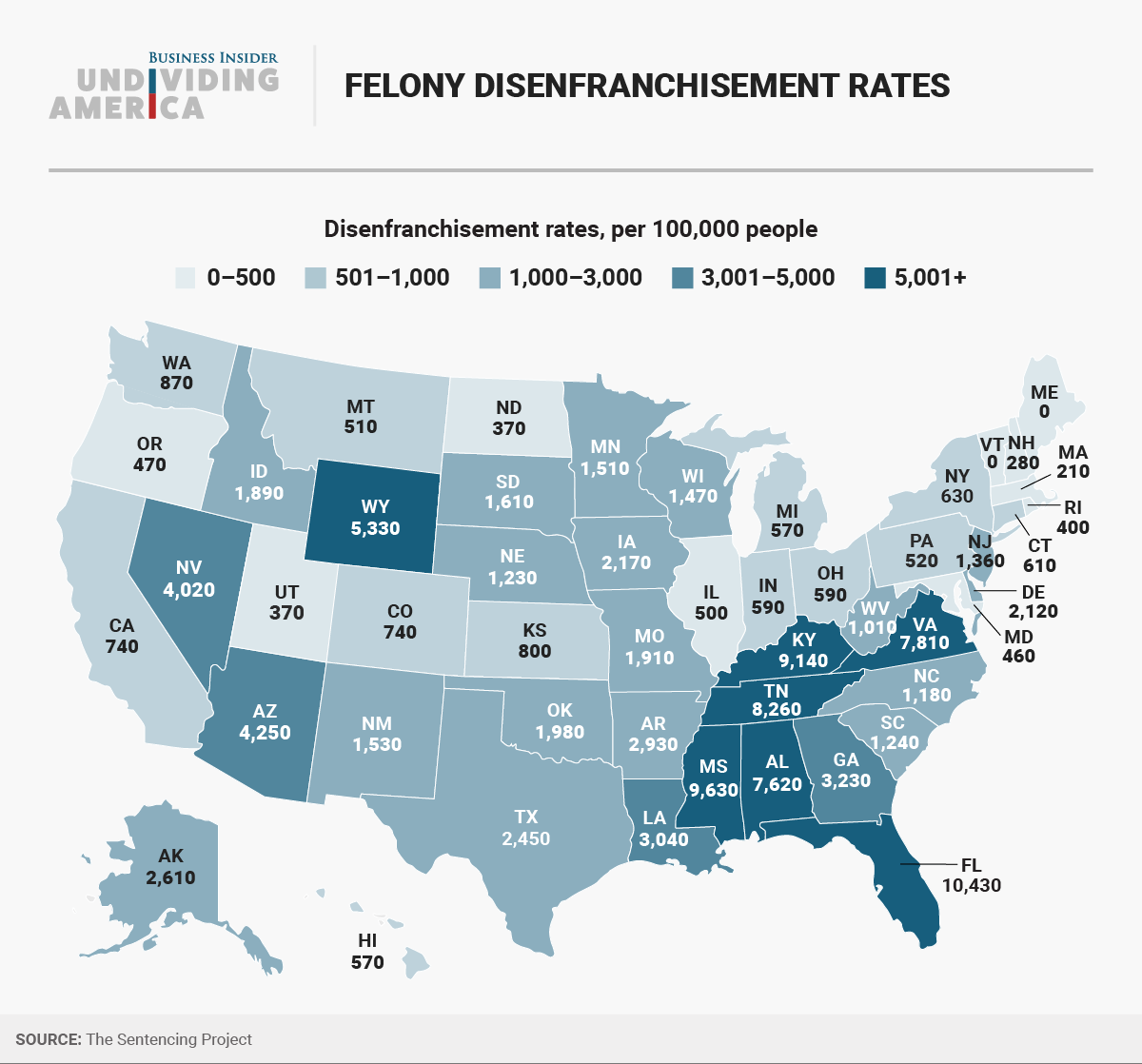 So that you can suppress voting among a constituency that does not support you.

Look at the group of people that is disproportionately incarcerated and what are typically their voting intentions.

If you crunch the numbers, you will find that for every single Republican vote removed by felony disenfranchisement, you remove roughly five Democrat votes.

The scholarship of Montesquieu is particularly apt here:

According to Montesquieu, a necessary condition for the existence of a republican government, whether democratic or aristocratic, is that the people in whom supreme power is lodged possess the quality of “public virtue,” meaning that they are motivated by a desire to achieve the public good. Although public virtue may not be necessary in a monarchy and is certainly absent in despotic regimes, it must be present to some degree in aristocratic republics and to a large degree in democratic republics. Sounding a theme that would be loudly echoed in Madison’s “Federalist 10,” Montesquieu asserts that without strong public virtue, a democratic republic is likely to be destroyed by conflict between various “factions,” each pursuing its own narrow interests at the expense of the broader public good.

When virtue is banished, ambition enters the hearts that are disposed to receive it, and avarice enters all of them. The desires change their objects; what once they loved, they love no longer; they were free under the laws, and now they want to be free to act against them; each citizen is like a slave who has run away from his master’s house;...The republic is reduced to mere appearance; and its strength is but the power of a few citizens, and the licence (to commit crime) of all.

Allowing criminals to vote diminishes both civic bonds and what it means to be a citizen precisely because it allows the contagion or criminality a voice and entry as legitimate into the public sphere.

According to Michelle Alexander, a legal scholar and a civil rights litigator, one reason for sich a policy is to disenfranchise the black population. She claims it is a form of gerry-mandering by removing the black male population from the citizenry and into the ranks of the incarcerated.

She makes this claim in her book, The New Jim Crow: Mass Incarceration in the Age of Colour-Blindness. She claims on current trends around a third of the black male population will be incarcerated. Obviously such a policy is intended to buttress the white supremacy by demographic engineering and hence the Jim Crow in the New Jim Crow.

Such a policy is against the canons of natural justice and is to be condemned.

Not the answer you're looking for? Browse other questions tagged voting crime civil-rights disenfranchisement .

99
Why allow convicted criminals to vote?
58
Why are Deep South states said to vote so lop-sidedly Republican, when they have high percentages of African Americans?

6
What alternatives have been proposed for prison sentences for violent crimes?
5
Voting rights for mentally disabled people
3
What solutions have been proposed in the US to an abstract contaminated vote bag problem?
6
How do felony disenfranchisement laws differ state by state?
6
What is the oldest "true" democracy?
9
What can a person do if she could not cast her vote during EU parliamentary elections?
6
What is status of California signature verification on absentee ballots for the March 3, 2020 Primary?
1
What prevents DC residents from registering and voting elsewhere?
2
How do I explain the difference between mathematical elimination and disenfranchisement?