Why is there few immigration in former communist countries

In occidental Europe there is a lot of immigration from third world countries (Africa, Asia, South America), because people who can manage it are fleeing poverty and hope for a better life. I can understand that very well, but why so few of them goes to the central European countries?

Sure, the quality of life might be a tad below occidental standards, but it is nowadays still very good and is in all cases much better of what it is in the third world.

It's not as simple as that, there are some very specific paths and networks. People from a particular country or even specific regions within a country try to reach specific destinations, based sometimes on historical links between countries, languages or earlier immigration (so that migrants can hope to get some support from relatives who immigrated earlier). The flows also change a lot over time based on local events (things like the war in the Balkan, then Iraq or Afghanistan, now Syria).

Often, at least in countries that are not at war, there are clear strategies. People don't emigrate haphazardly with their whole family. Rather, the ones who go are young men and women with some education and hopes of “making it” and sending money back. People can also be flexible, I know several people from (French-speaking countries in) Africa who went to Spain, illegally, to do whatever work they could find in construction or agriculture there and now moved to France because the Spanish economy tanked.

But in any case, many migrants (and their families) invest a lot in their plan and decide where to go based on whatever information they can find (and quite a bit of disinformation as well) from relatives, TV, the web, etc. Here again, language, culture and existing networks/past migrations play a big role. Without much immigration during the time they were behind the iron curtain, Eastern European countries would not usually be perceived as promising destination (although there was in fact some migration between socialist countries, e.g. from Vietnam to Eastern Germany, it would be interesting to see if anything of that remains today).

And then you have the whole “Sangatte” situation, thousands of people from Iraq, Afghanistan and elsewhere who desperately want to cross the Channel and immigrate to the UK. They are not trying to go to “Western Europe” and won't settle for Germany (which is doing relatively well economically even compared to the UK), France (not so bad in many respects), Sweden (with a relatively humane asylum policy and, if the statistics regarding past applications are any guide, better odds of being granted refugee status) or anywhere else, they want to go to the UK.

So it's easy to think that “people from the third world” go to “Western Europe” but if you look at the details it's much more complicated. In aggregate, you can certainly find some commonalities between group of countries and I suspect Central and Eastern Europe as a whole is perceived as less welcoming (both in terms of economic opportunities and the treatment foreigners can expect) but the causality is much more fine-grained than that.

This is a map showing the number of immigrants by country: 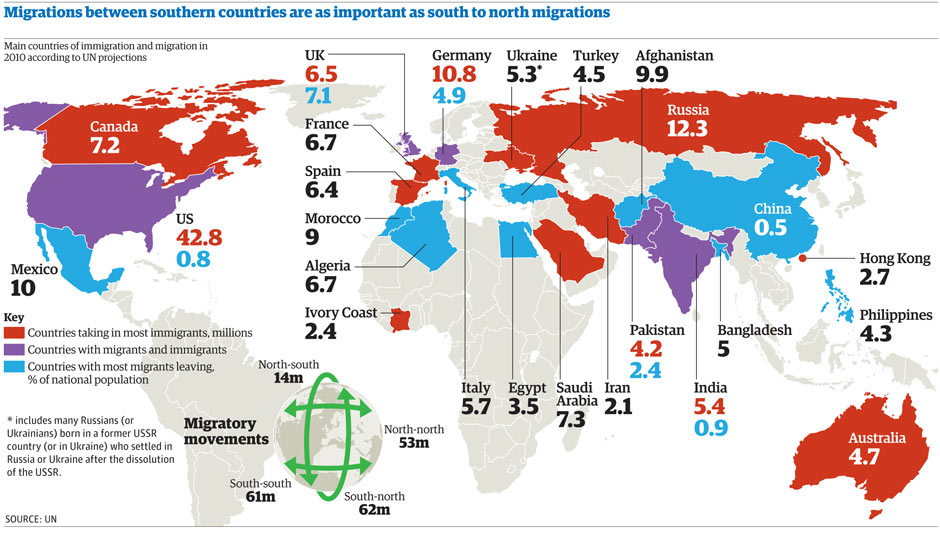 As you can see, the former Communist countries Russia and Ukraine host a lot of immigrants, with Russia being at the second place globally, after the US.

Not the answer you're looking for? Browse other questions tagged europe immigration .