Why are former communist dictatorships in the EU considered less democratic by The Economist?

The democracy index by The Economist (also see Wikipedia) is almost systematically classing countries that were recently dictatorships as less democratic than the longer term democratic countries.

Countries within the former soviet block are all in flawed democracies categories, only the Czech Republic is very close to making it to full democracy for last year (2014). The long-time capitalist countries that aren't well ranked are so only because of the 2008 crisis and were well ranked before, except Italy.

Since those countries are democracies on paper, and were much inspired from their western neighbours when they did their democratic transition, what prevents those countries from being fully democratic according to The Economist? Is it related to their dictatorial past, or is it completely unrelated?

The page you mentioned includes a link with more details on the data and methodology used to create this ranking. It's possible to use this to find out a little more about the reasons for the slightly lower rankings of former COMECON countries.

To get started, I made a quick analysis of the data contrasting two groups of countries:

The original ranking summarises a bunch of variables, grouped into 6 categories: political variables, economy, environment, gender socioeconomic equality, health, knowledge. As you can see the categories are pretty broad and might not correspond to what you mean by “democracy”, on paper or otherwise.

Here is a graph with a quick overview of the scores in each category: 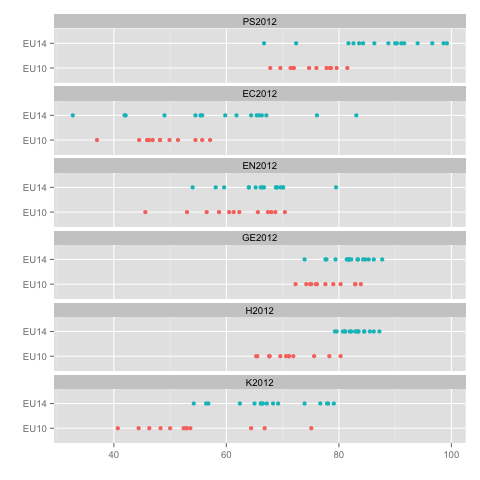 Going through them one by one:

Without getting in a long discussion of the methodology, differences in ”political variables”, ”economy” and “knowledge” are the most immediate reasons why the countries you mentioned score lower in this particular ranking.

One final caveat: The scores of all the countries considered are between 65 and 85 on a scale designed to go from 0 to 100 (actual range: 35-87) and a dataset mostly restricted to countries considered “free” or “mostly free” by Freedom House. Simplifying a complex issue to crude ranks or categories is in the nature of the exercise but any cut-off is necessarily somewhat arbitrary. There is a world of countries doing much much worse out there so I would be wary of over interpreting the magnitude of the difference.

Not the answer you're looking for? Browse other questions tagged democracy european-union communism europe .

2
Why is there few immigration in former communist countries
8
Why does the economist label France a flawed democracy?
24
For what stated reasons (not opinion) is classical communism antagonistic towards the bourgeoisie more than the aristocracy?
3
Are there successful opposition parties in illiberal democracies?
1
Does the populist rise in Europe prove that intra-party democracy is not working?
5
Are autocratic countries handling COVID-19 better than democratic countries?