In models of income distribution, is inequality a natural outcome?

From The Oxford Handbook of Political Economy (2006):

Two of the more influential papers that examine inequality within a median voter context are Persson and Tabellini (1994) and Alesina and Rodrik (1994), which both argue that greater inequality will lead to greater preferences for redistribution, and show a negative empirical connection between inequality and growth.

The open question with these papers is whether inequality actually increases redistribution. Empirically there is a strong negative relationship between inequality and social welfare spending, which seems to contradict. While this negative correlation might reflect that more redistribution reduces inequality, it is also possible that more inequality leads to less redistribution rather than more because in unequal societies the poor lack the resources to push their political agenda.

Are there models that account for the disproportionate amount of power of a minority?
That is, how has the median-voter model been adapted to allow for different degrees of influence, and given such a model, is equality inherently unstable? Under what assumptions (of redistribution) would equality be stable? In particular, I'm interested in the dynamics of the system: if equality and inequality are both stable equilibria, what determines to which equilibrium the system converges?

For example, if the rich can influence political outcomes through lobbying activities or membership in special interest groups, then more inequality could lead to less redistribution rather than more. According to this view, as the rich become richer, they acquire a greater ability to influence policy and achieve the policy goals that they want.

EDIT: To give additional context, there are models based on complex adaptive systems such as the "sugarscape" of Epstein and Axtell (1996) that report:

Under a great variety of conditions the distribution of wealth on the sugarscape is highly skewed, with most agents having little wealth. Highly skewed distributions of income and wealth are also characteristic of actual human societies, a fact first described quantitatively by Vilfredo Pareto.

Although I imagine there are an infinite number of ways to model such a system, I'm asking for one that restrains itself to the rational agent model, could be explained mathematically (or as an algorithm), has been compared to empirical evidence (despite its limitations), and has been published in a journal or presented at a conference.

I recognize there are cultural, and especially ethnic, aspects to inequality, but I am asking for a mathematical model.

A model for such a complex problem would be difficult to find and would be riddled with problems. This is the typical problem when trying to place a scientific model to prove or disprove a politcal charged assertion is that political affiliations are called into question, and since we are all have opinions on matters of politics it is hard to find anybody who wouldn't have a conflict of interest in creating such a model objectively.

With that being said here is a well known article from the American Political Science Review: Here

It calls out the convential view here:

According to the conventional view, a change in the economic environment that causes the income distribution to grow more unequal increases political support for redistributive policies. In other words, the public favors redistributive policies as the need for them increases. Although voters are assumed to care only about their own welfare, the result is a welfare policy that varies appropriately with the needs of the poor. In addition, if greater equality reduces the demand for redistributive policies and if those policies inhibit growth, then reduced income inequality promotes growth (Alesina and Rodrik 1994; Persson and Tabellini 1994).

The more recent studies paint a different picture, that while income inequality encourages redistributive policies, it tends to greatly encourage social spending policies that benefit the employed worker, but greatly discourages social spending for lower class citizens who are not employed.

For instance: High income and political inequality results in high support for unemployment insurance, workers compensation, and social security, however sees a decrease in support for welfare, food stamps, and public homeless shelters.

This equates to the following opposing political arguments:

Critics frequently view welfare programs as redistributive policies that distort incentives and reduce the efficiency of the economy. Supporters often argue, in contrast, that welfare policies provide insurance to all and enhance efficiency to the extent that the public sector protects against risks that are difficult or impossible to cover through private insurance markets. In fact, the policy implication of either view is not obvious. On the one hand, one might think that welfare policies are fundamentally redistributive but favor increased spending on the ground that the benefit of greater equality outweighs the efficiency loss. On the other hand, one might consider welfare policies as social insurance but think that the demand for insurance could be better satisfied by private firms.

So the political argument is one where one side frames the welfare argument for public insurance to protect equality as acceptable despite loss of efficiency, while the other side frames the argument that it is a redistributive policy that is inherently unfair, reduces efficiency and could be better handled in a private market.

Here is Figure 3 showing what the results of the model had found: 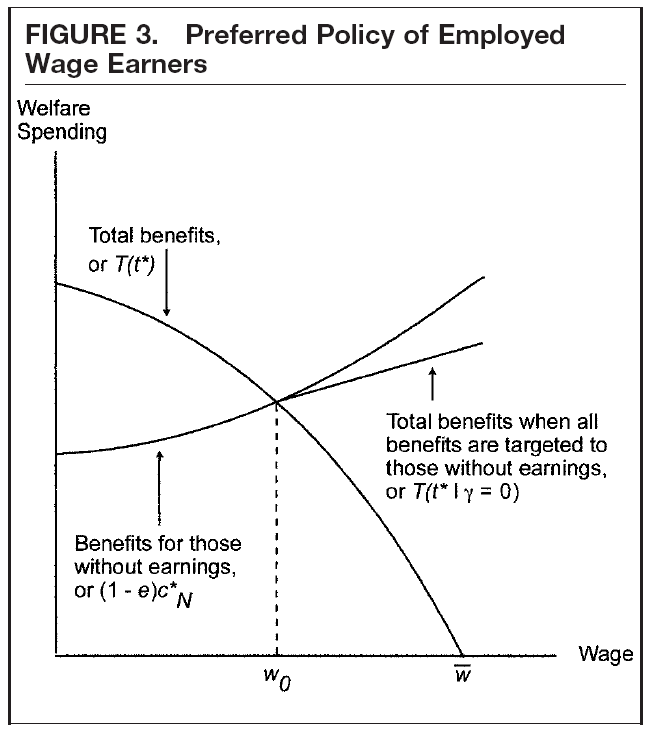 Without going into the math and statistics behind this graph (it is pretty intense!) These are measures based on mean and median incomes to measure inequality, wages and welfare spending. One can clearly see there is a divergence from conventional wisdom on income distribution that as wages drop, support for benefits targeting those without income drops as opposed to support for benefits targeting those with income.

Not the answer you're looking for? Browse other questions tagged democracy inequality income .

13
Why is there concern about the growing income gap, and is there an ideal level?
2
What does inequality look like when measured in man-hours employed?
2
Is there data that looks at income inequality by examining total income over each person's life?
23
Why not have a wealth dependent income tax?
10
US Income Inequality adjusted for cost of living differences on a per county/city basis
63
How can the influence of wealthy individuals on democratic processes be reduced?
16
What purpose does economic inequality (inequality in wealth) serve?
5
Effectiveness of wealth-adjusted basic income?
3
How can the Harm Principle be adjusted to fit Social Democracy and Social Liberalism