Why is the drive for undocumented migration so strong between France and the United Kingdom?

Since years, undocumented migrants camp in Calais and try to get to the United Kingdom. In recent days, media have reported this has increased. For example, BBC News.

I can understand why undocumented migrants from countries like Sudan and Syria take high risks in clandestine migration to the European Union. Countries of origin are in turmoil and conditions in refugee camps in neighbouring countries are poor. However, why is there such a strong drive to get from France to the United Kingdom? France has a considerable immigrant population itself, including many from Africa. Presumably, the sans-papiers communities in Paris could as well as London could accommodate people from Syria, Sudan, or from countries from where people attempt to migrate for economic reasons. What's the deal with the UK?

I have been wondering about that for quite some time and I do not have any comprehensive answer but that fact is that migration routes are much more complicated than “poor people going to rich countries”.

There are many people from Africa immigrating to France as well, either with a student visa, family/spouse visa or some other way. Some of them might end up applying for asylum because they find themselves stuck with no other way to avoid removal. But most of these people do not usually come from the same countries as the people trying to reach the UK from Calais.

So it's not a case of migrants in general wanting to go to the UK or France. It's specific people (sometimes from the same country, sometimes not) who have specific strategies. And the number of people from, say, Algeria or Congo in Paris or Brussels might not struck a Sudanese as particularly comforting so it's not so surprising they would have different goals even if they are all from Africa.

Furthermore, the situation in Calais is particularly dramatic and visible but at any given time there are “only” 2-3000 people there. To get an idea of the scale, there are currently more than 1.5M citizens of various African countries living in France, perhaps 80000 new African immigrants (that's not a net change, just the count of those who got a “titre de séjour”) and 50000 asylum applications (from all nationalities, success rate is about 10%) every year. And Italy or Hungary cite figures in the tens or hundreds of thousands regarding illegal entries so only very few of these people end up in Calais.

Another way to look at this is to compare these numbers with requests made under the Dublin agreement. The Dublin agreement stipulates that the country most responsible for the entry of an asylum seeker in the EU must examine his or her application. Consequently if someone who entered through, say, Italy is found in France, France can request that Italy takes this person back and deals with their asylum application instead of France.

The system is clearly completely broken but still, there were about 50000 request a year in 2009-2012, a number that's an order of magnitude higher than the number of people in Calais. Those are also people who were in one European country but tried to reach another one. The only reason it's not as visible as the Calais situation is because it does not happen in any one place and those people are caught later out of the public sight, whereas the UK is only reachable through a handful of port of entries and still maintains full border checks so you see actual people standing there and trying to climb on lorries.

Finally, there is another peculiar aspect of French policy that might contribute to the situation. In France, thousands of people are in a sort of legal limbo, “non-expulsable” but “non-régularisable”. It means they cannot be removed (because their country is not safe, their consulate does not recognise them, etc.) but they cannot be granted a status (because their asylum application has been denied, they don't want to apply for asylum in France or they do not qualify for any other path to a legal status). Legally speaking, those people are supposed to leave the territory (e.g. they are under what's called an “obligation de quitter le territoire français”) but the police does not know what to do with them.

In some other countries, people in this situation can be detained indefinitely until a “solution” is found. In France, administrative detention (“rétention administrative”) cannot last more than 45 days (unless the person is linked with terrorism). That means that after 45 days, you find yourself on the streets, with absolutely no perspective at any sort of legal status in France but nobody physically stopping you from going to Calais and trying your luck there.

Some of these people might make it to the tunnel grounds, be detained by the UK border guards and returned to France or perhaps be arrested again in France, spend some time in a detention centre and then start the whole cycle again.

But beyond these generalities, it's interesting to read this report recently published by a local charity. It's based on 54 interviews with migrants in the area. A few salient findings:

According to this other press article about the same report, some people in Calais do not want to lodge any sort of formal claim in France (like an asylum application) because they know their fingerprints have been collected in Italy or Greece and they therefore fear they would be returned there (where the conditions are much poorer) rather than be allowed to stay in France. Technically, I think the same would happen in the UK but they are perhaps under the impression that going there would protect them from that fate.

Added October 2017: A recent report, also based on interviews in the area found that over 60% of the respondents cited a relative or acquaintance in the UK as a reason for wanting to go there instead of staying in France.

In August 2018, Refugee Rights Europe published a report entitled The Long Wait which surveyed 870 individuals living in the informal refugee camp in Calais, roughly 15% of the camp's population. Of these, 94.6% reported that they were aiming to continue on to the UK in order to seek asylum.

In total, 40% are hoping to reach the United Kingdom as they have friends and/or family there. 14% cited that they hope to reach the UK as British asylum laws are preferable to the French laws, with a number of respondents telling researchers that they fear their application would be rejected by the French authorities but potentially accepted by the British. A further 23% of respondents told researchers that they are looking for refuge in the UK because of their language skills.

Another large reason, related to language skills, appears to be aspirations for better opportunities in the UK. The survey asked respondents what they thought they would work as in the UK, and the results show a clear preference for skilled work and higher education. 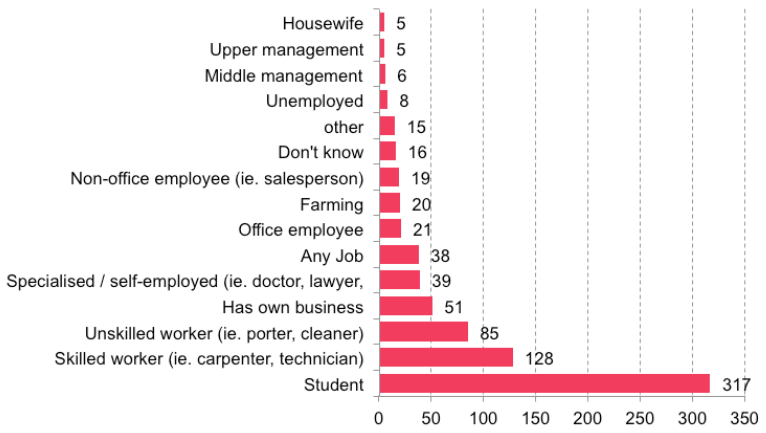 This could be another reason these roles are not sought in France, as the survey also found that English proficiency was far higher than French. Presumably, a contributing factor is that migrants' French is often insufficient to pursue these career paths. 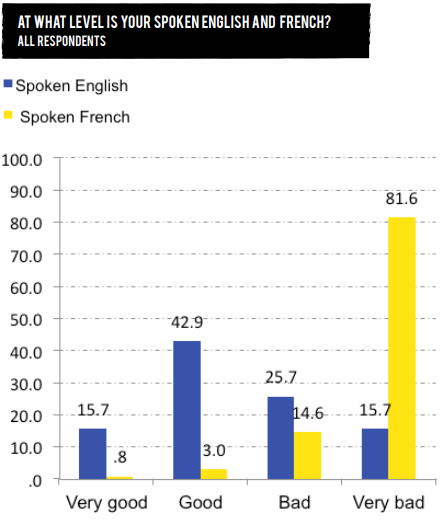 Finally, you have mentioned in your original question and comments that migrants may be put off by societal attitudes towards migrants. However, the survey also found that residents were afraid of 'facists/racists in Calais', as well as a fear of the French government, and especially the French police:

One of the most significant causes for concern was distrust of the French police, who many believe are “very violent” towards the camp’s inhabitants. “The French police treat us the same as Syrian police,” said one resident. Some expressed frustration at police blocking the exit from the camp at night, reporting that their “freedom has been taken” 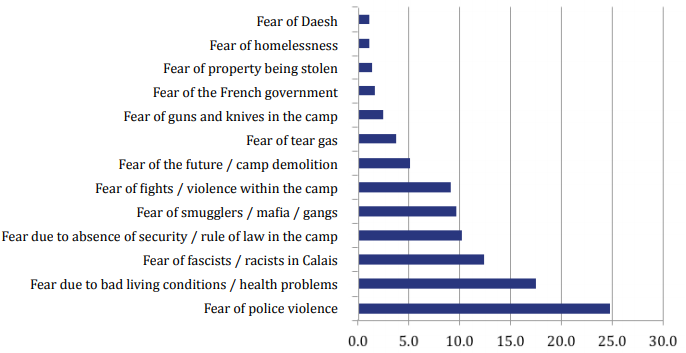 Admittedly, the fieldwork for this report was conducted in February 2016, before the Brexit referendum. However, the two follow-up reports, Still Waiting and Still Here, which were conducted after the Brexit vote, exhibit similar responses. For example, 73% of adults and 75% of minors thought that the UK was the 'best country in Europe for them'.

In particular, on the issue of Brexit, respondents were asked in Still Here whether they had heard of the vote. Approximately two-thirds of respondents had. Of these, almost twice as many respondents thought that the vote would affect them in a positive way (29%), rather than a negative way (16%).

Life as an illegal immigrant is hard everywhere, in UK as well as in France: you know (almost) nobody, you understand and speak more or less of the language, you are not allowed to work nor to rent a flat, you fear arrest and possibly expulsion, sometimes you are in physical danger from outlaws or gangs, you are not accustomed to the climate...

That's why anything that can help is welcome: if you have a distant relative, if you speak the local language, if you know anyone who might provide you some undeclared job, if law gives you better chances to get asylum...

For many immigrants, say, French-speaking western Africans, Paris is the best shot: that's why after arriving by boat to Italy they try to cross the border to France. For others, however, London is the better chance: Afghans, Sudaneses, Somalis, Pakistaneses or Bengladis most often speak English and not French, and will try to get support from accointances in the local communities from their (former) homeland. For many people stuck at Calais or Grande-Synthe, life prospects in UK may not be brillant, but they just have nothing to hope for in France.

Each individual trajectory can be influenced in many ways, but as a general rule we can notice that immigrants will actually most often try to resettle in the country which colonized their homeland until the 20th century.

If I understand your question correctly, you are asking why, if they made to France, do they want to push to England, even with the complexities that it implies (camps, etc).

If I understood right, we can see a few advantages the England has in comparison to France for those immigrants:

-2
Why are migrants crossing the English Channel from the EU to the UK?
11
How to distribute asylum applicants more evenly in Europe?

14
When and why did the President of the French Republic inherit the titles of the King of France?
8
What is the French support for Frexit (France leaving EU) and why?
8
Why is there so much worry about France potentially leaving the EU?
2
Why hasn't France exited the EU, when it loathes the EU's enlargement?
20
Why are gambling winnings not taxed in the United Kingdom?
12
Why is there a strong link between education and voting Remain?
3
Why has Macron/France insisted that the UK must nominate a commissioner?
3
Arguments for Scotland in non-EU United Kingdom?
36
What are the benefits for strong economies like Germany and France for being members of the European Union?
8
Why does France resist the Midcat pipeline?