Why did the perception of corruption in China increase suddenly in 2014? 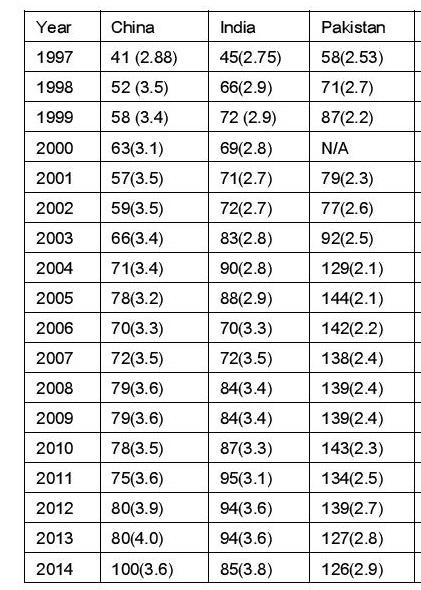 This is the compilation of data from Transparency International's Corruption Perception Index.

This chart shows that in 2014, China suddenly plunged to 100th position. On the other hand, India's position has been improved by 9 places.

What is the factor that contributed to the sudden increase in China's corruption?

To be clear, Transparency International (TI) doesn't measure corruption. In the whole work you can see they develop all the investigation with the word "perception", which mean their work is to know what the common citizen feel about the government and their corruption's fight.

Having said that, China is going to keep dropping two more places before they can rise in the charter of TI. They're going to drop not because they're lacking of fighting corruption, but they are currently uncovering lots of corruption cases. This is not new. What the people are trying to tell is deeper, they demand a full political reform and the authorities are trying to respond. The statistics are talking about cases of corruption and the measures: 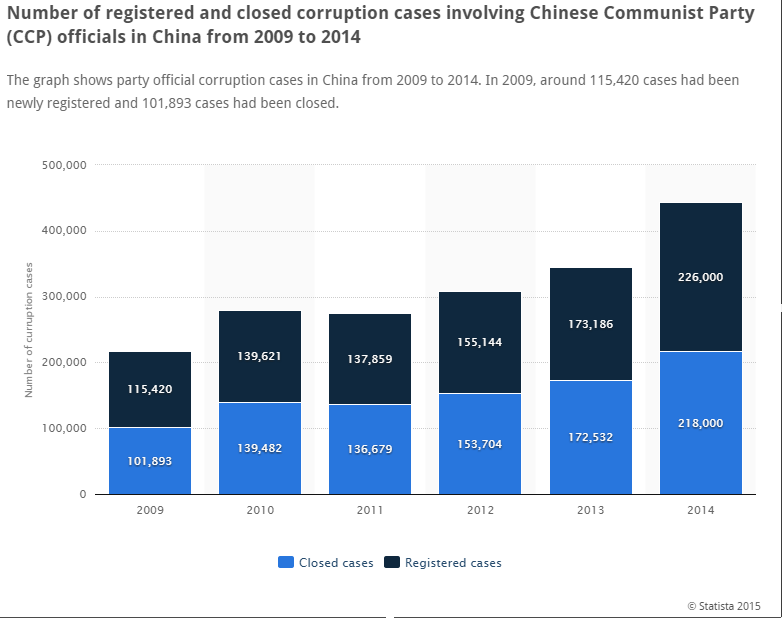 The number of cases is even before 2009, remember the Shanghai pension case for example. Jason Lyall wrote about the current measures:

The Chinese Communist Party is centralizing authority, broadcasting the self-criticisms of local officials and calling for a new morality in public life. The party’s decentralized and technocratic rule is over, replaced with a new, more political mode of governance aimed at better controlling local officials.

What people see is the response of their authorities and the opposition inside the China Communist Party says the efforts made by them are not enough, giving the reason in some terms to TI, that's why the result you found. Foreign Policy made a post about the cases of corruption, considering the report made by the Discipline Committee:

You may think about the procedures and the partiality of the justice in the country and we have to take in consideration the number of cases keep growing while several cases are treated. These changes started (precisely highly supported) with Xi Jingping are going to take lots of time, but the message sent inside the Communist Party is very clear as the FP said:

To finish, I would recommend this paper to understand the beginning of the corruption fighting in 2000s of Zengke He.

I'm no China expert, but may this had something to do with the high-profile corruption trial of Bo Xilai in 2013.

Former minister of commerce and party secretary in Chongqing, Bo's

political fortunes came to an abrupt end following the Wang Lijun incident, in which his top lieutenant and police chief sought asylum at the American consulate in Chengdu. Wang claimed to have information about the involvement of Bo Xilai and his wife Gu Kailai in the murder of British businessman Neil Heywood, who allegedly had close financial ties to the two.

In the fallout, Bo was removed as the party chief of Chongqing and lost his seat on the Politburo. He was later stripped of all his positions and lost his seat at the National People's Congress, and was eventually expelled from the party. In 2013, Bo was found guilty of corruption, stripped of all his assets, and sentenced to life imprisonment. He is incarcerated at Qincheng Prison.

The drop in ranking for China, as your chart illustrates, is mostly because other countries that used to be less corrupt than China, on average, became less corrupt, while China's absolute ranking didn't change much.

Then, it declined in 2014 from 2013 (back to 3.5), however, and that did represent something real. What was starting to be discovered was that became more clear in 2014 and even more clear in 2015 was the economic and transactions were being manipulated to look rosy when they were not in China.

Economic analysts were noting that Chinese banks had lots of bad debt outstanding that hasn't been written off, artificially inflating GDP by a big amount in October of 2014. About 97% of the profits that manufacturers in China earned in 2014 were from a 60% increase in the value of the investment securities that they held, while their profits from operations rose by only 0.09%. In 2014, around 97% of existing yuan-denominated bonds hold ratings of double-A to triple-A—the best a company can get despite clear evidence of widespread manufacturing industry distress and the bond ratings of almost all publicly listed Chinese companies were wildly overrated. There were numerous anecdotes of a manufacturing bubble in the international news by April of 2015, but those were known to the insiders in the Transparency International study sooner.

In early July of 2015, the Chinese government has basically closed the stock markets for 89% of its publicly traded firms due to a continuing stock market crash; the Shanghai index was then firmly in bear market territory, down 28.6 per cent since the June peak, while the tech-heavy Shenzhen Composite had fallen 33.2 per cent. In response, by late July of 2015, a Chinese government agency, the China Securities Finance Corp (CSF), central bank-backed refinancing institution, came to be "among top 10 shareholders of many listed-firms" as Chinese regulators have stepped in to prop up a collapsing stock market, effectively, turning what had until recently been a mostly theoretical communist basis of the Chinese economy into one in which state ownership of enterprise was again rapidly becoming the norm.

4
Why do comparable states differ in corruption?
5
Why has Malta's perceived corruption grown so much recently?
1
Corruption, efficiency and economic success of the Chinese government
15
What type of corruption did Trump campaign against?
5
Why is China investing in Pakistan, considering the security considerations and corruption?
2
Do anti blasphemy laws increase corruption?
17
Is the Chinese system becoming more Fascist than Capitalist?
1
What's the earliest date on public record when the WHO requested to visit Wuhan to investigate COVID-19?
8
Why has China suddenly decided to station troops in the disputed Ladakh / Aksai Chin region?