How can Norway have such a high public employment rate while keeping a low public spending?

Norway has one of the highest public employment rates (as a fraction of the total employment) in the "developed world" (around 30%, the highest in the OECD32 and about twice the average of the OECD32, as of 2008). 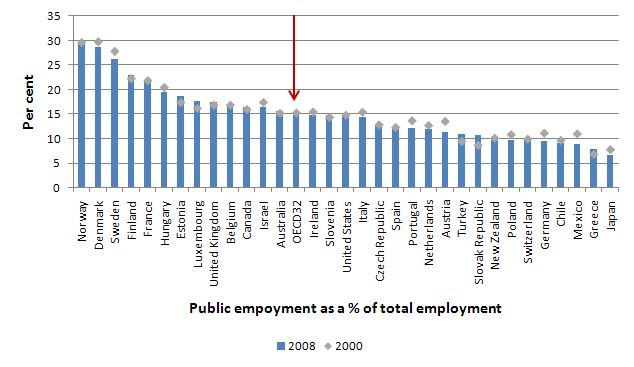 However, Norway total public spending (as a percentage of the total GDP) is low (or moderate) and much lower than those ones from countries with high public employment rates (Denmark, Sweden, Finland, and France). I would guess that expenditure in public jobs is a big fraction of the total government spending, together with pensions. And this seems to be confirmed to some extent by the two previous charts, at least for those countries with the highest public employment: Denmark, Sweden, Finland, and France have high public spending (greater than 55%) and high public employment rates (greater than 20%). However, Norway seems to be one exception. Why is that? Is because the fraction of high-qualified public workers (doctors, professors, teachers -- those who have a higher income) is not as high as in France, Sweden, Denmark, and Finland?

Below you can see a chart with the public spending segmented in categories. Is the reason that most public jobs are usually in education and health, and Norway public spending in these sectors is as high as in Sweden, Finland, Denmark, or France? Os is it due to something else? 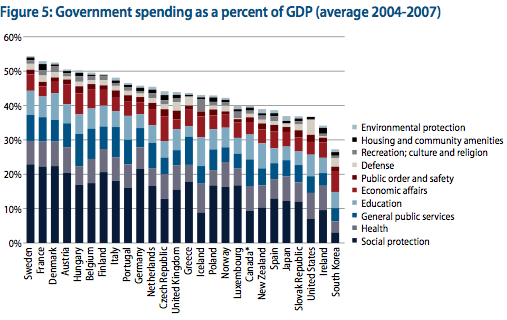 Norway's ratio of government spending to GDP per capita is so low because their GDP per capita is so high. With $100,579 per year and head it is the second highest in Europe (only Luxembourg got slightly more, but Luxembourg is a special case in many regard). For comparison, the economical heavyweights of the EU, Germany and France, only got $45,000 and $44,099 respectively. Main reason for the high GDP of Norway is its very profitable oil- and natural gas industry.

Also, Norway doesn't just have a high rate of public employment, but also a very low unemployment rate (4.3%, European average 11.1%). For most developed countries, welfare spending is one of the biggest numbers in their budget. When the government needs to pay the unemployed anyway, they can just as well offer them jobs and put them to good use for their money. So when increasing government employment results in lower unemployment, it is not as costly as one would think. Especially not when their work is profitable: The biggest employer in Norway is the 67% government-owned oil- and gas company Statoil.

GDP is the wrong denominator to use here. It's like calculating a company's operating costs as percentage of its revenue, while including proceeds from liquidation of assets as part that revenue. It's just bad accounting. 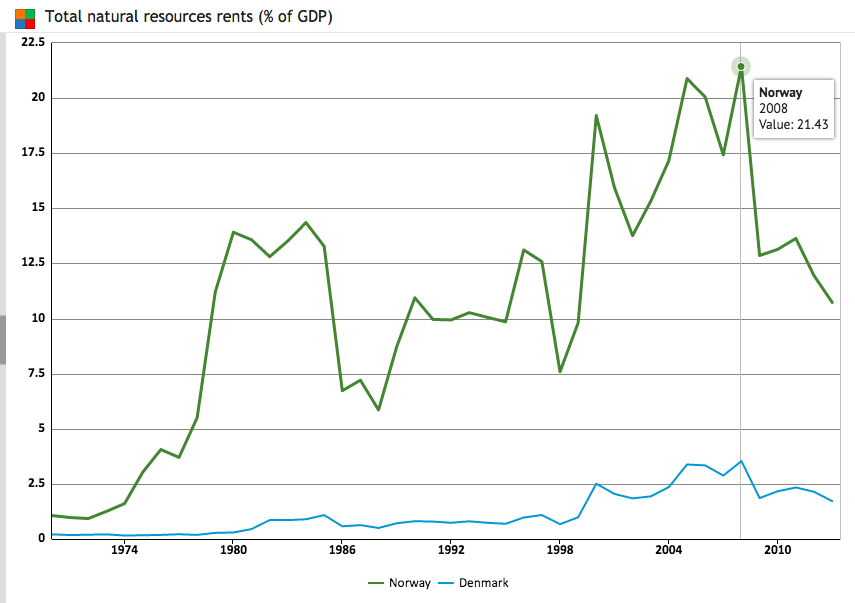 Not the answer you're looking for? Browse other questions tagged employment norway .