How many new settlements did Israel build in the last decade in the West Bank?

How many new settlements did Israel build in the last decade in the West Bank? I mean I've seen many news about Israeli settlement "expansion" in various international media but when looked into it all turned out building new houses within the borders of already existing settlements.

So was there even any new settlements in the - let's say - last decade? If yes then how many?

When was the last settlement built?

When answering this question, it's useful to clarify a few things.

First, it's important to clarify what we mean by a "settlement". As you learned in the comments, there are settlements and settlement outposts. Settlement outposts are considered illegal under Israeli law, and are established without the explicit permission of the Israeli government. They tend to be illegal, and most would be uprooted in all Israeli proposals for a two-state solution.

Settlement blocks, suburbs of East Jerusalem, and cities in the West Bank, however, are established either by the Israeli government or with its permission. These settlements can often have populations of tens of thousands, like Ma'ale Adumim or Modi'in Illit, and the Israeli government will, with some regularity, announce the construction of new housing units within or near these settlements.

Israel intends to keep these settlements, even if a Palestinian state would be created, and most frameworks for a two-state solution call for a solution based on the 1949 armistice lines with mutually agreed land swaps such that Israel can retain some of its settlements.

Since Oslo, the population of settlements (including areas of East Jerusalem) has grown substantially. In 1993, there were under 200,000 Israelis living in East Jerusalem and the West Bank, whereas now there are over 500,000. 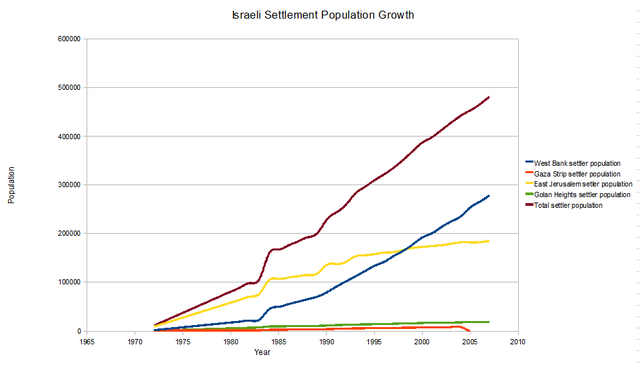 Critics of Israeli settlements will sometimes use these statistics to argue that Israel is attempting a de facto annexation of the West Bank, and that growth in settlements constitutes a land grab. However, to analyze this claim, we have to look at not just the population growth of settlements, but their growth in terms of land area.

We can see additional evidence of the relative lack of growth of Israeli Settlements in terms of land area by examining Israel's offers to the Palestinians and seeing how much land area Israel was willing to cede. Under an Israeli offer in the 2000 Camp David Summit, Israel would have retained around 9% of the West Bank, before counting land swaps. Under Israeli Prime Minister Olmert's offer to the Palestinians in 2008, Israel would have retained 6.8% of the West Bank, before land swaps.

As you can see, there are a number of ways to measure Israeli settlement expansion, and using just one measurement wouldn't give you the whole picture. The most succinct way to answer your question would be to say that Israeli settlements have been growing in population, with hundreds of housing units constructed per year, but that they have not been growing in terms of land area.

It is true what Avi writes that the Israeli government didn't themselves establish any new settlements in the last decade (2005 - 2015). But a lot of settlements built without the governments permission were retroactively legalized.

For example, the Ma'ale Adumim settlement which is the largest on the West Bank began life in 1975 as an "illegal outpost". Illegal in the sense that it was built without government permission, but the international community of course considers all settlements illegal. Many of the large Israeli settlements got started in the same way.

So, if we consider the number of illegal settlements legalized in the period 2005 - 2016, the total is at least 32 new settlements. Here is a list of them, when they were established and when they were authorized. Note that the authorization year can be tricky to decide because the legalization process can be a lengthy multi-year thing:

This is settlement growth outside of Jerusalem. Settlement expansion in Jerusalem is hard to get a firm grasp of. Should building a Jewish suburb count as a settlement or not even though it will contain more settlers than most smaller settlements? Jerusalem is one big expanding city.

Not the answer you're looking for? Browse other questions tagged israel palestine middle-east .

65
Why does Israel build settlements in Palestine?
23
What is Israel's long-term plan in the West Bank?

65
Why does Israel build settlements in Palestine?
21
What is the current meaning of “Israel”?
22
Why does the Israeli Blockade of Gaza cover things other than weapons?
7
Does the UN Security Council votes 14-0 to condemn Israeli settlement have binding consequences for Israel?
4
Distribution of illegal/legalized Jewish settlements in the Oslo zones
0
Why did Israel prefer to finance kibbutzim using banks instead of subsidies or other forms of support?
4
Does the government of Israel have an official position on the claimed territory?
4
Does moving the US embassy to Jerusalem make a three-state solution more likely?
21
Does Britain have de jure authority over the West Bank and Gaza?