Why don't German workers ask for the money they deserve?

German macroeconomy is doing really well. Much better than the other economies within the Eurozone and better than most countries from all around the world. However, workers (low and middle classes) and retired people are not doing better, according to what I have been told by a German. After googling for a while, I have come across these illustrative charts that show that middle and low classes are not making more money (taking into the inflation, the raise of prices): 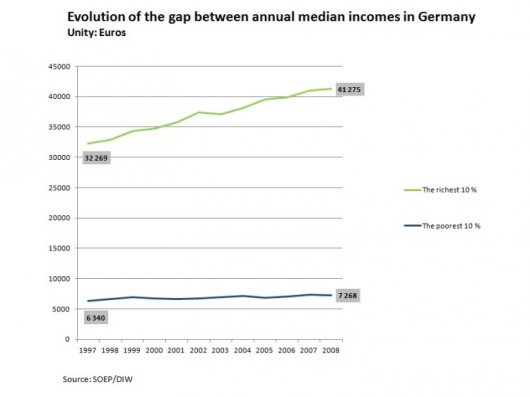 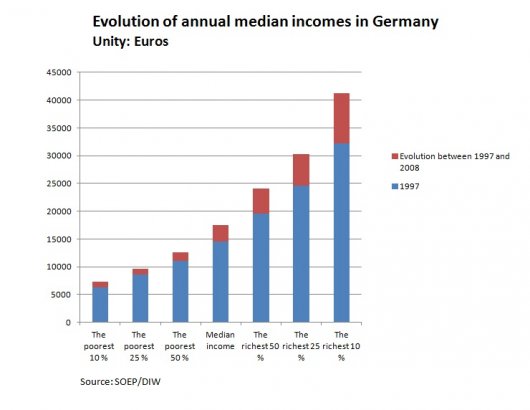 In particular, the Gini coefficient (that measures income inequalities, the greater the coefficient the more unequal the incomes) grew more than a 15% from 2000 to 2010.

This chart compares German workers' productivity/income to other workers in the Eurozone. The unit labour cost represents the amount of money needed to pay your staff to make one unit of output, one widget. This is a function of two elements, the cost of the staff—their hourly wages—and the speed at which they make widgets, their productivity. : 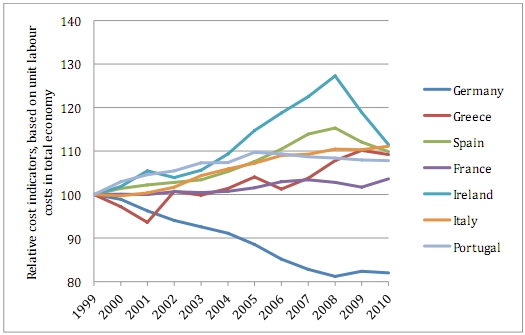 The graph above shows that the productivity of a German worker has grown much faster than its income. And this seems pretty unfair.

Why do German workers seem happy with this and keep supporting these policies? Are they not aware of this? Why don't they protest so that their salaries get increased?

I have asked myself the same question many times and made observations. I have experienced this not only in Germany but also other countries where I have lived. My belief is that people who are doing just about fine are more eager not to loose the bit that they have - their part of the wealth, even if it is very small. With the rise of time-work, low income jobs and tougher welfare laws, lower pensions and an average income raise lower of the inflation, people are constantly fearing to fall from middle class into lower class. And very often they turn agains those who have less in order to distinguish themselves and make differences clear. A few days ago I read in a blog

Wealth doesn't trickle down, shit does. And when they pour it from the top you make sure it hits the people below you

In short: When people are not doing great but believe things could be much worse, they will avoid political experiments and hold onto what they have so far. It's fear of social decline combined with hope of social advancement.

Comparatively well off
Many in Germany think that they are well off in contrast to other european countries, and that this is why they are comparatively low paid. The feeling is that with higher wages, the German economy would be less competitive within the eurozone and the labour market would we weaker.

Weak unions
I can't offer a real comparison between how organized German workers are compared to other eurozone countries, but Germany is one of the countries with the least work days lost to strikes. Unions here don't fight that much. I think part of the reason is that the bigger unions are practically married to the German Socialist Party (SPD), and the SPD has been at the forefront of social change for the worst since at least Schröder. Another part is that the union leadership shares the belief described above, that German economy has to do well for there to be a strong labour market.

Hartz IV et al
Again, I can't offer a comparison to other european countries. Hartz IV (actually the whole packege, but Hartz IV gets talked about the most) made it more scary and stigmatized and unpleasant to be unemployed. This puts more pressure on workers to get a job at all costs, or keep one.

The fascists in Germany forbade any union and cheased/arrested/killed union workers. In the hard years of rebuilding Germany the laws had formed and did not really change in recent years (except the including of legal warn-strike as a free-time-compensation that does mean damage to the company's image only and crucial test to the workers).

The German workers has been separated.

Unions are allowed to strike in case of salary-tariff (Entgeldrahmenabkommen) only.

Only unions are allowed to strike, any organization or private-persons (strike-leaders) must pay as well the salary to the employees who strike and the damage the company and supplier-companies have and the lawyers and so on... (that's why left-wing-parties are working undercover and strike-leaders in Germany are even hidden to their colleagues and strike-leader-speakers are homemakers or jobless and seldom union workers)

Unions in Germany are between different worlds: bought by the companies, having international companies but an old German reactionary law-landscape like the duty of quietude, criticized from the workers and fighting against the battle-tested communists. So every union in Germany is divided into two pieces, the reactionary union-leader and their base of workers and honest union workers. In this situation they can not unite to unions from other

The Iron Curtain disappeared quite a few years ago, but this did not cause an immediate economic equalization across Europe. There are two important reasons for this, a temporal and a spatial reason.

The temporal reason is simply that change takes time. Eastern Europe had an outdated, low-performing, low-tech and low-paying economy after decades of communist rule. That is changing, but it is not instant.

Germany historically lies on the edge between Eastern and Western Europe - after all, that border literally divided Germany until the collapse of communist rule. The reunification merged a high-performing, well-paying economy with a much worse one. This directly caused a wage gap. And as Eastern Germany remained in economic competition with Poland and the Czech Republic, the wages in Eastern Germany could not grow towards the Western levels.

This of course did cause a bit of a brain drain. Highly educated East Germans, especially the younger generations would move west, for the higher-paying jobs there. This does not help competitiveness of the economy in former East Germany.

Of course, there is also a global trend. Automation replaced unskilled labor first and now is threatening the middle classes. This requires quite a bit of capital, but the ECB is printing massive amounts of Euros to shore up failing Southern European governments. This isn't causing inflation (as hoped) because the money isn't spent on wages, but is spent to replace workers instead. And quite a bit of the ECB money is landing in Germany, as the ECB is preferentially buying German company bonds.

Why do German workers seem happy with this and keep supporting these policies?

A big problem is that many people with lower income in Germany feel excluded from society and don't vote. So they aren't happy with the situation, but don't have the hope that their situation could be changed. This is also the political apathy, which is much talked about.

Still, low turnouts can lead to unequal representation among various parts of the population. In developed countries, non-voters tend to be concentrated in particular demographic and socioeconomic groups, especially the young and the poor.

This is a free magazin from the German "Bundeszentrale für Politische Bildung". You can find there several articles about the lower class. (in German language)

Regarding change over time. Short answer: this is because the USSR fell. This led to general shift towards right-wing policies throughout Europe.

Regarding comparison with other countries. The cheaper the work force the more competitive economy is.

One of the answers to this in the US is that non-wage benefits have been increasing in cost. Since these don't show up in statistics based on wage income, they haven't been showing up in graphs making use of these statistics. Particularly not in those that show ratios with other statistics.

I did a little searching for German stats, but I only found the older http://www.eurofound.europa.eu/observatories/eurwork/articles/non-wage-labour-costs-in-germany-reach-new-record-high which says

I don't know if that trend has continued in Germany or not. It would be consistent with US statistics if it had.

Not the answer you're looking for? Browse other questions tagged germany income-inequality .

2
How's the German government formed?
10
Why would Trump call out Germany saying they owe the US and NATO 'vast sums' of money for defence?
5
Are turnout figures available at the German consulate level for the 2017 Turkish Referendum?
30
Why do we hear so little about the German President?
12
What part of the German political system makes it possible for chancellors to stay in power for so long compared to other parliamentary​ states?
33
Why is the new German parliament 12 % bigger?
38
Why is the German GEZ a fee and not a tax?
10
Is it normal for the German government to only release a partial name?
4
What is the justification of imposing higher minimum salary for foreign workers than for the local ones?
30
Does the German President's apology for WWII reflect the prevailing views of the people of Germany?