In the Political Compass test, what does “left libertarian” mean? [closed]

I took a political compass quiz and it categorized me as "left libertarian". What does this mean?

If it is a party, then I don't know anything about it, and I was wondering if anyone knew of it, and if they did, what are the major tenets of its overall party platform?

If it's not a party, then what does "Left Libertarian" mean?

ideology terminology libertarianism
Share
Improve this question
edited May 9 '17 at 18:52 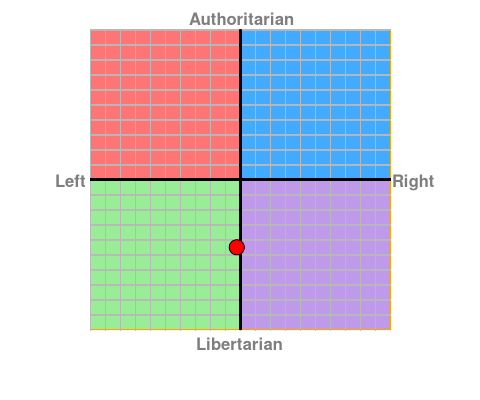 This chart is from politicalcompass.org, and you can visit that site for more information.

This is what I assume you're talking about.

Left and "Libertarian" are on different axes on the chart.

Not the answer you're looking for? Browse other questions tagged ideology terminology libertarianism .

12
What policies for ecological sustainability have been proposed by conservative or economically libertarian political groups?
27
In the US, why do libertarians tend to side with the GOP rather than the DNC?
0
Trump on Trans/Bathroom Issue: Libertarian or Conservative?
7
Does someone knows what is “brainpower” in Doomsday clock?
7
How do Libertarian political thinkers address self harm?
20
In the UK, what is pairing?
4
Which political philosophy takes a situational approach as to whether government or private enterprise solves a problem better?
1
Term for shifting positions toward the center during an election
5
Are Americans with strong ideological views less likely to be independent?