What is the geostrategic reason for Zimbabwe to keep Cluster Munitions legal?

On 4/Nov/2015, during a recent UNGA voting on banning Cluster Munitions, the opinion was mutual amongst 130 states. Only two world's superpowers voted against: Zimbabwe and Russia. 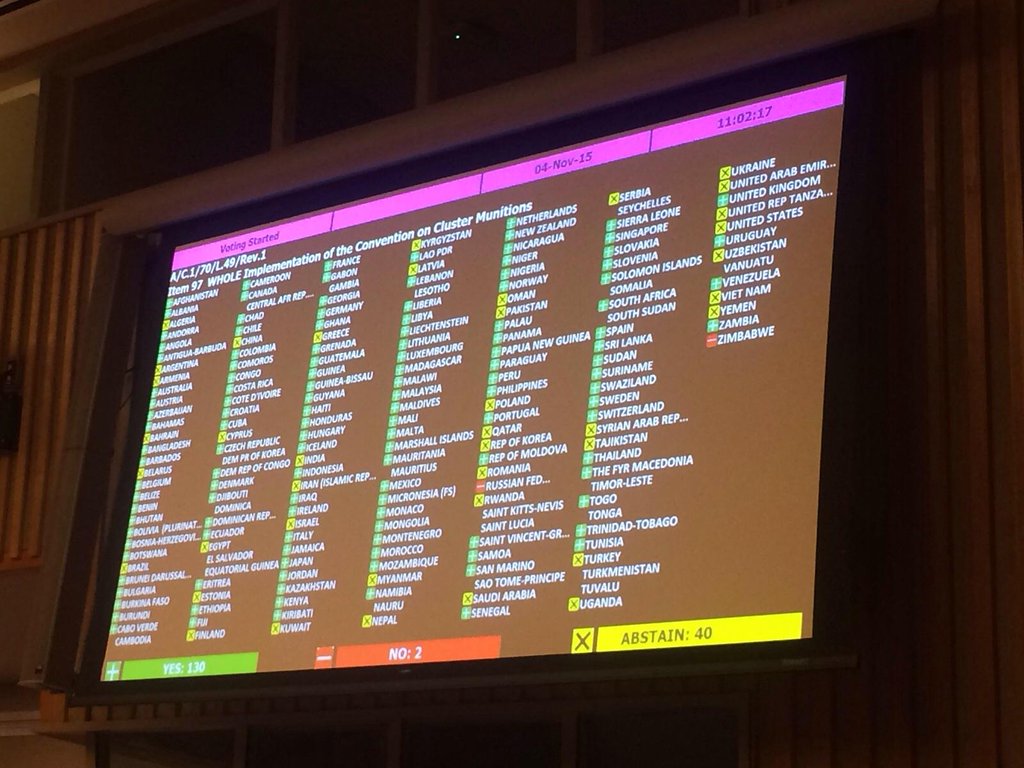 Next, action was taken on the draft resolution on the implementation of the Convention on Cluster Munitions (document A/C.1/70/L.49/Rev.1), by which the Assembly would urge all States outside the Convention to join as soon as possible, and also express strong concern regarding recent allegations and evidence of the use of cluster munitions in different parts of the world.

That text was approved by a recorded vote of 130 in favour to 2 against (Russian Federation, Zimbabwe), with 40 abstentions. — UN.org

Considering massive use of cluster munitions in its wars against Georgia, Ukraine, and Syria, I pretty understand the Russia's reasoning. However, I see no obvious explanation why the other superpower, Zimbabwe, has voted against banning this weapon.

Assuming its own annual military budget of US $60 million, it seems hard to believe that Zimbabwe can even afford this type of weapons. Also, I saw no historic evidence for using this weapon during Rhodesian War or Mozambique War.

So, the question is: what is the geostrategic reason for Zimbabwe to support Cluster Munitions?

Note: local currency exchange rate of 3.5×1016 ZWD for $1, and annual inflation of 1023 percent. Can this lead to some explanation?

According to this report Zimbabwe does possess cluster munitions, though it has never used them and the stockpiles seem to be fairly old (e.g. from back when it was called Rhodesia). It even states that "Zimbabwe has expressed interest in joining the convention in the past and said it has conducted stakeholder consultations on the matter of accession", so it doesn't seem to be the case that it's hell-bent on keeping its cluster munitions.

The report also mentions that "Zimbabwe has not explained why it voted against the non-binding resolution".

So why did Zimbabwe vote against? We may never know for sure, but a favour to Russia is not unlikely. Russia and Zimbabwe seem to have a fairly good relation; Russia vetoed several U.N. sanctions against Zimbabwe, including one just a few months before this resolution on cluster munitions. In addition Russia has promised "increased Russian investment in agriculture, mining, infrastructure development and the manufacturing industries", including a US $4 billion mining deal.

Land mines, cluster munitions, and other lingering anti-personnel weapons are useful when fighting wars. They can be used for area defense and to channel attacking infantry into kill zones. They can help isolated villages defend themselves from guerrillas. They can also help establish no-man's lands in trench warfare. These weapons are relatively cheap, and do not require much skill to emplace.

The current government of Zimbabwe came to power after winning a guerrilla war. Many of its subjects are not happy with the government. Its leaders know first-hand how ugly a guerrilla war is, and have good reasons for wanting cheap weapons that can be used to prevent guerrillas from terrorizing villages.

Alternatively, the current government of Zimbabwe has a long history of actions that upset the governments of the United States and the United Kingdom. For a poor, weak country at odds with the U.S., the best defense is possession of nuclear weapons. The second-best defense is a credible threat of being able to wage a guerrilla war after being defeated. The Zimbabwean government has good reasons for wanting cheap weapons that can be used to prevent foreign soldiers from easily patrolling villages.

As a third alternative, the government of Zimbabwe might have voted against the measure to spite the United Kingdom, which voted for it.

Not the answer you're looking for? Browse other questions tagged united-nations weapons zimbabwe .

26
What actions against pirates are legal for private ships?
3
Is it legal for one country to be under military protection of other?
3
The reason to veto in zakiur rahman lakhvi case
17
What is the legal background for Russia's seat as a Permanent Member of UNSC?
5
What are the requirements for an entity to be granted observer status for the UN General Assembly?
14
What are the main policy differences between Emmerson Mnangagwa and Grace Mugabe?
5
Negative impact of the Ottawa treaty / Convention for Cluster Munitions for the modern army?
2
Have arms manufacturers and dealers ever been accused of or convicted of a war crime in the U.S. or by and at an international tribunal?
3
What are the reasons for buying weapon systems from other countries?
3
What was the legal basis for the arrest of Gerald Bull by the UN in South Africa?