Has a British PM ever given a speech with the EU flag alongside the Union Jack?

It is common to see most other EU leaders give talks, speeches and conferences with their national flag proudly alongside the EU flag (Merkel, Rajoy, Hollande etc). This cannot be said for UK Prime Ministers where an EU flag will never be in sight when they are on home soil.

Are there any examples of when this was done? Is there a protocol in place which forbids it? 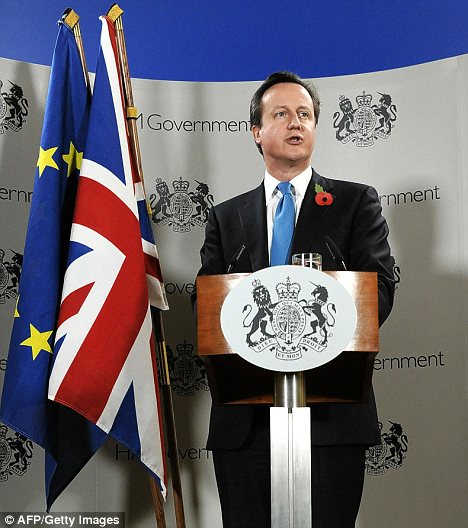 I've been unable to find out where this photo was taken, so cannot guarantee it was on "home soil". It is notable that when the PM does press briefings at 10 Downing Street, he normally has two Union Flags behind him.

It appears that it is entirely proper to fly other flags alongside the Union Flag, including the flag of the EU. Why this is not done may be a reflection of the UK's relative Euroscepticism.

(Incidentally, it appears he's not alone in this...)

Note: "Union Flag" and "Union Jack" both refer to the flag of the United Kingdom.

I'm going to go out on a limb here and say no, not on home soil - unless you count joint press conferences with EU dignitaries.

While Steve Melnikoff's answer shows that David Cameron did give a solo press conference accompanied by the EU flag, this was taken at the European Council headquarters in Brussels in 2010.

The only examples I was able to find of British PMs appearing on home soil with the flag of the European Union alongside the Union Flag were under Tony Blair and Gordon Brown - in both cases when appearing with then European Commission President Barroso. In both cases, I think the flags could be interpreted to represent the presence of Barroso, rather than the UK's membership of the bloc.

Nevertheless, I'm not aware of any protocol which would forbid such an appearance, so it's entirely possible that it's happened at some point. For example, up until 2011, UK Government buildings such as 10 Downing Street, the Treasury, and the Foreign Office, flew the EU flag on Europe Day.

Blair appeared with the flag during an event at the Foreign Office in London in 2005 when the UK assumed the Presidency of the Council of the European Union: 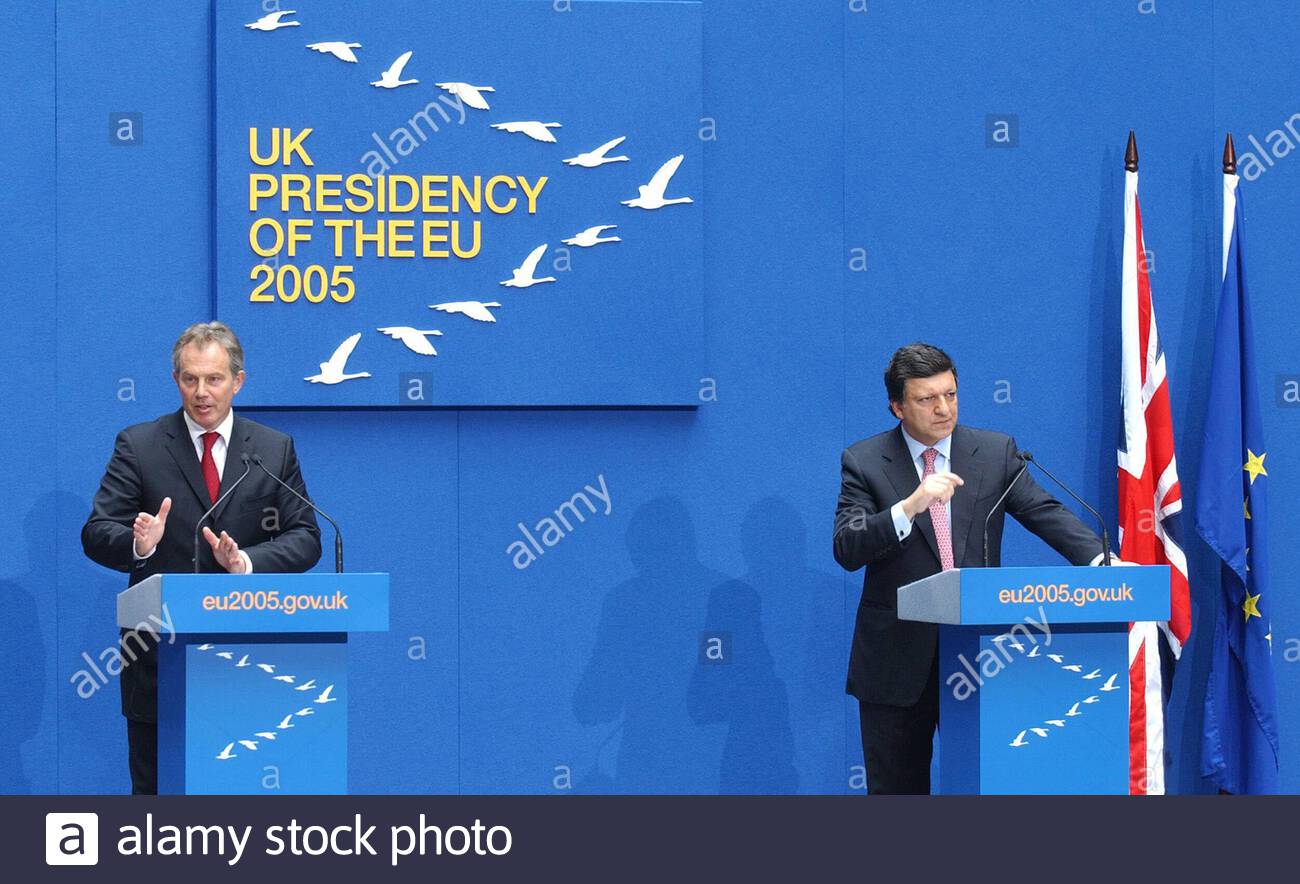 A couple of years later, in 2007, Brown held a press conference with Barroso at 10 Downing Street: 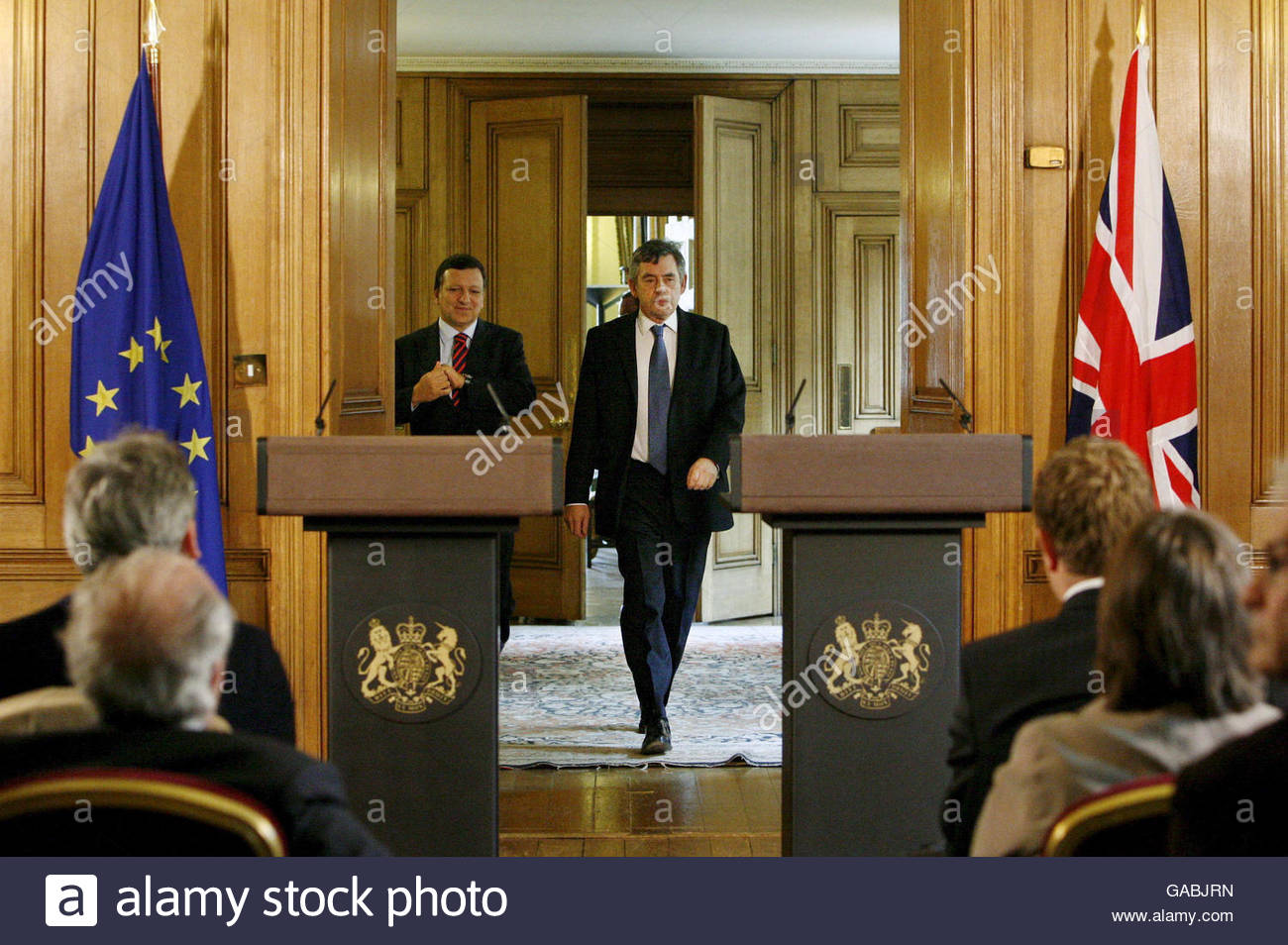 Not the answer you're looking for? Browse other questions tagged united-kingdom european-union flag symbols .

9
Has the British Monarch ever exercised their right to revoke land "ownership" rights for personal use?
3
Did Hezbollah ever have a flag with a nuclear mushroom cloud on it?
3
As the British Monarchy has given up divine right, how can they maintain the motto Dieu et mon droit (God and my right)
10
What is the significance of a black and white Union Jack?
2
Could a democratic removal of the British monarchy ever be practically implemented?
1
The backstop involves staying in a Customs Union with the EU - who gets the tariffs?
6
Has a member of the British royal family ever run for Prime Minister of the UK?
3
Has a British political party ever had more women MPs than men before The Independent Group?
3
What flag is similar to the American flag but has 9 stars and 13 vertical stripes?