What are the meanings of "Kangaroo", "Guillotine", and "Fox" in the UK House of Commons?

What are these concepts in UK House of Commons? Are they some kind of MPs or are they names given to some roles while debating? What exactly are they?

The kangaroo is a practice which allows the Speaker to select which amendments to a Bill are to be debated1.

The guillotine is a common name for allocation of time motions2.

I'm afraid I have no clue what "the fox" might refer to.

"The Fox" as far as I'm aware refers to Charles James Fox, a famous 18th Century Whig party leader, the leader of the 'Foxite' faction within the Whigs, and the first person to hold the - at that point unofficial - role of Leader of the Opposition.

He was an extraordinarily colourful character. He began his career as a rather conservative politician, but he was moulded over time to become rather radically liberal. He was an opponent of the Government's actions in the American War of Independence, and supported the French revolution.

In the press, he was often depicted with vulpine characteristics - see the cartoon below depicting Fox on the left, and Lord Lincoln on the right. 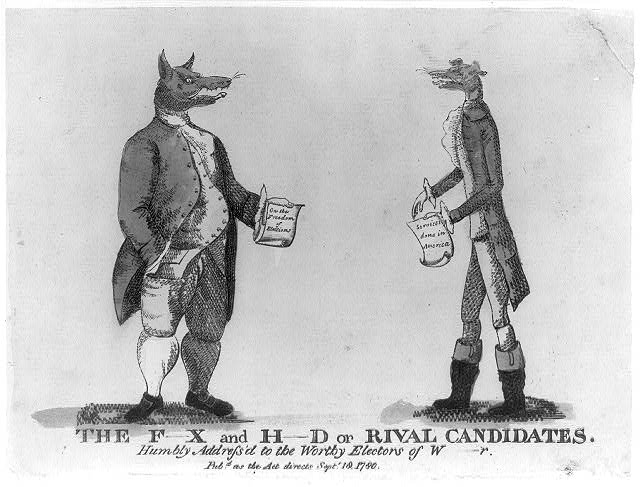 Quite recently, he was compared to Boris Johnson in a letter to the Telegraph by Lord Lexden.

Not the answer you're looking for? Browse other questions tagged united-kingdom constitution parliament terminology .