Could Bill Clinton have won a third term?

This may straddle the line between politics and history at this point, but if we didn't have the 22nd Amendment, which limits Presidents to two terms, could Bill Clinton have won a third term?

Specifically, I'm looking for polls, articles, or other data which shows that people at the time would have been willing to elect him a third time if they could. In the absence of a term limit, he obviously could have won a third time, but if the political climate was against him, then he likely wouldn't have. Likewise, looking back from 15 years later it's easy for people to say they would have preferred him to Bush, but that doesn't mean they would have made that choice at the time.

It's entirely speculative, but yes I think Clinton would have won a Third Term were it not for the 22nd Amendment.

If one looks at his job approval numbers, overall for his 8 years in office, they climbed steadily all the way to 2001. 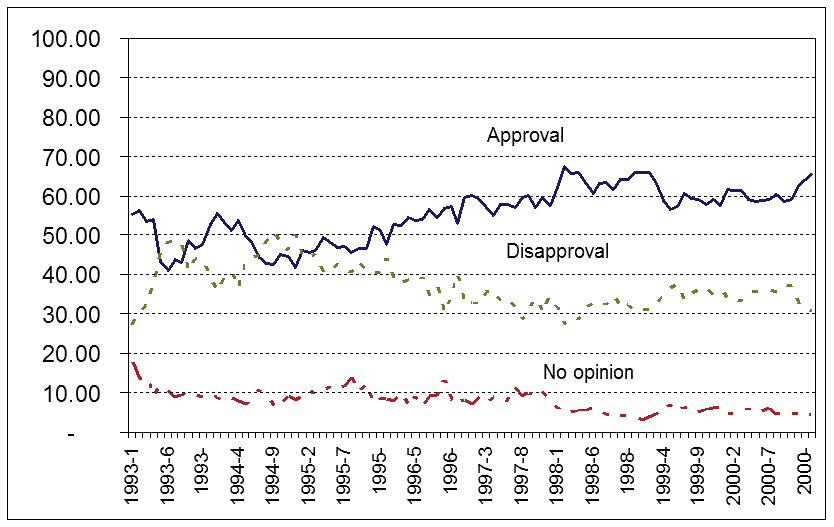 Not the answer you're looking for? Browse other questions tagged united-states president history .

6
What is the point of the twenty-second amendment?

2
On what grounds can President Obama run for a third time?
38
Can the current President of the United States block the transfer of their office to the next elected president?
4
What info in the hacked DNC/Clinton emails was likely to sway the US general election?
25
How can Erdoğan stay in office until 2029?
58
Why don't US presidents run in other elections after their term ends?
2
Reasons Congress would censure Trump and what that'd mean
5
Are there some systematic attempts to evaluate how pro-Christian-Right presidential policies have been?
6
Could a delayed impeachment trial cause Trump to be removed from office in his second term?