Why is the Republican majority greater in the US House of Reps than in the Senate?

Currently, Republicans control both houses of the US Congress. What's surprising to me is that their majority is greater in the House of Representatives (57%) than in the Senate (54%). I think that historically the opposite has been true, due to the general trend that most of the less populous states have more conservative voters, and the Senate gives equal representation to these small, conservative states. 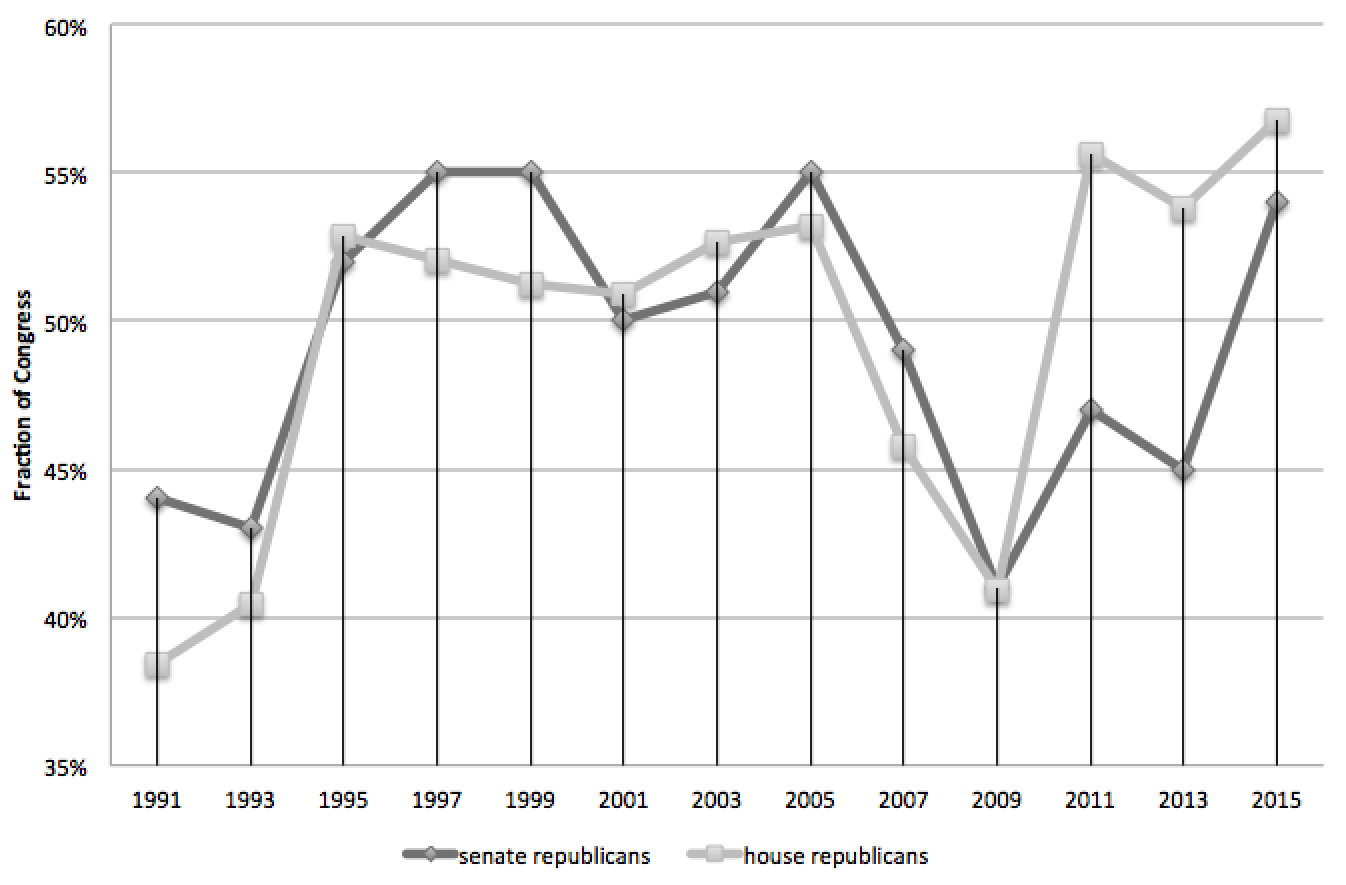 In the chart above, you can see Republicans being much stronger in the Senate after the 2010 midterm elections, but never before (in recent history).

It is true that Republicans have gained some seats by gerrymandering. But the general consensus seems to be that it isn't enough to control the House. Particularly as the gerrymandering still cuts both ways. While Republican gerrymanders gained seats in Florida and Virginia, they lost in Illinois and Maryland to Democratic gerrymanders.

A bigger problem is the loss of old Democratic gerrymanders. For example, North Carolina went from majority Democrats in the House to majority Republicans. Some of that is the new Republican gerrymander, but some of that is the loss of the old gerrymander which had been done by the Democrats. Cook has North Carolina at R+3, which suggests something like a seven to six split in the Republicans' favor. Perhaps eight to five if you consider the varying concentrations. But in 2009, the Democrats controlled the state delegation.

Another issue relates to how the Senate elections work. Terms are for six years, with roughly a third up for election every two years. All House seats are up every two years. So 2012 was a weak Republican year, as was 2006. As a result, the majority of seats that year were and are held by Democrats. 2010 was a good Republican year, as was 2004. So many House seats which held Democrats elected in 2008 or 2006 flipped in 2010. But the Senate seats had already flipped in 2004, limiting gains in 2010. Republicans did gain in 2014, turning back more seats than they lost in 2008. But that still doesn't entirely offset the 2012 class.

This is important because Democrats do better in presidential election years than in midterms. 2006 was an exception to this. This has given Democrats more seats in that class than they might otherwise hold. If Republicans had done as well in 2012 as they did in 2014, they might actually be doing better in the Senate than in the House.

House and Senate are close

Looking at the Wikipedia link, it was also true in all but one congressional session from 1959-74 as well as in the period after 2010.

And the 2011-2014 period was still within two standard deviations of the mean for 1991-2016. They wouldn't even make statistical outliers. If you use the longer 1857-2016 numbers from the Wikipedia link, they're barely over one standard deviation. We may simply be looking for an explanation where random variation is sufficient.

Not the answer you're looking for? Browse other questions tagged united-states congress parties senate republican-party .

7
Why is the Senate so much more prominent than the House of Representatives?
6
Who is Senate Majority Leader if the parties are tied with a 3rd party president?
16
In 2016, why did the GOP win the House popular vote while Clinton won the popular vote?
3
Can the Speaker of the House of Reps be replaced?
23
Is this proposal by U.S. presidential candidate Pete Buttigieg to change the composition of the Supreme Court constitutional?
5
Would switching to a proportionate House require a constitutional amendment?
3
Who becomes Senate Majority Leader if no party controls an absolute majority of seats?
14
Why doesn’t the Republican majority in the United States Senate reintroduce their heathcare legislation?
9
Why does the 50–50 Senate need a new organizing resolution before Democrats can take control of committee chairmanships?
19
Are US Representatives from wealthy districts more likely to "graduate" to the Senate than Reps from poorer districts?