How is PredictWise so certain that Ted Cruz has absolutely no chance to win the 2016 Republican Party presidential primaries and caucuses?

This website seems to be able to predict who will win the 2016 Presidential Election.

But their results are very strange: 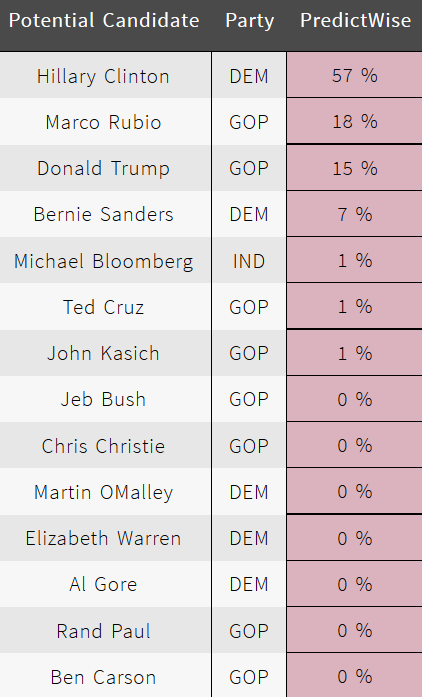 Ted Cruz only has 1% chance of winning!

But in most national polls Ted Cruz is in second place with about 21%.

So my question is: how is PredictWise so sure that Ted Cruz will lose?

Is it because they know a top secret information that the general public doesn't know about?

Is it because, even though Cruz has some good chances of winning the Republican Party presidential nomination, he will never be able to beat Clinton or Sanders?

Or is it because the website PredictWise is just bad at making predictions?

A common problem when trying to handicap the Republican race is to place too much reliance on a single statistic: first place votes for each candidate. The problem that Cruz has is that he doesn't do well in other statistics. His favorability is lousy. He has no endorsements from other Senators nor from governors. He is low on most second choice charts. Why do second choices matter? Because they help determine how candidates will do after other candidates drop out. When Fiorina and Christie dropped out, it was Rubio and Kasich whose numbers improved. Not Cruz.

I don't want to give the impression that second choices are more important than are first choices. They aren't. But when trying to pick who is going to do better as the field narrows, first place choices are a bad statistic. When trying to determine who will next drop out, they are much better. Jeb Bush dropped because he was unable to break into the top three places in any of the three primaries and there is no statistic suggesting that he would do better in the future. Plus of course, there were rumors that his campaign was running low on funds. Another important statistic.

Another problem that Cruz has is that his support is very narrow. He does well with evangelicals but does horribly with moderates and somewhat conservatives. Cruz is in much the same state as Sanders. It is certainly possible for him to win. But he would need to do better with people who are not voting for him. And like with Sanders, many of the prediction markets think that he will not do so. They may be wrong, but this isn't top secret information. It's just information that is not shown in first choice polling results.

Is it because, even though Cruz has some good chances of winning the Republican Party presidential nomination, he will never be able to beat Clinton or Sanders?

I'm not sure that it is true that he wouldn't beat Clinton or Sanders. The RealClearPolitics average currently has Cruz as the slight favorite if he were to face Clinton. Sanders does better but not unbeatably so.

As others will point out general election polls at this point in the primary are notoriously unreliable. This does not indicate that Cruz, or even Kasich, is a guaranteed win against Clinton. But it does tend to disprove claims that Clinton would automatically beat Cruz.

Consider the possibility that Cruz runs to Clinton's left on the Iraq war. Many Democrats are against the Iraq war, as Obama showed in 2008. It's also likely that many Democrats don't realize that Cruz holds that position. She is not well suited to defeat that kind of political attack. Again, as demonstrated in 2008.

Per the site's own presentation, its predictions are based mostly on prediction markets and indeed, those appear to put Marco Rubio (or even Jeb Bush, who just withdrew from the race!) way ahead of Ted Cruz so there is really nothing idiosyncratic about PredictWise. And prediction markets are based on multiple bets, not on top secret information or anyone's “secret sauce”.

One possible interpretation is that people betting on the election could still see someone perceived as an “establishment” candidate like Rubio or even Bush somehow win in the end but assume that Donald Trump has the main demographics among the Republican base cornered and that there is no path to the Republican nomination for Cruz. That would readily account for the discrepancy with the raw polls numbers because if you agree with this view of the current state of the Republican primaries (which is neither secret nor particularly original), you can easily see why being second does you no good.

But that's really just a rationalisation on my part because neither PredictWise nor the prediction markets it's using are based on an explicit model or theory. Rather, they just aggregate the opinions of their (possibly small and biased) user base (and some additional data sources in the case of PredictWise). This also means that different people could have widely different reasons to reach the same conclusion and maybe disagree on the other candidates respective chances and yet all bet against Cruz and contribute to this outcome without agreeing on why it is so.

I just came across an article making a similar argument regarding Cruz and disposing of his candidacy in a couple of paragraphs before turning to Trump vs. Rubio. Right or wrong, this is quickly becoming conventional wisdom, not some sort of wild prediction from PredictWise.

Relaxed's answer is entirely right about how PrecictWise calculates its number, but I wanted to add some quotes from FiveThirtyEight which may explain why so many people seem so down on his chances. The article was written on 2/19, the day before the South Carolina Republican primary, but given the results there (Trump got all delegates with 32%, Cruz and Rubio split 0 at 22% each), it's even more true.

Cruz’s short-term dilemma has received plenty of attention: Donald Trump is on the verge of a big victory in the South Carolina Republican primary, according to most polls, and could easily capture all 50 of the Palmetto State’s delegates. And if Cruz can’t beat Trump in South Carolina — a Southern state with a large proportion of evangelical and very conservative voters, Cruz’s supposed bread and butter — what “SEC Primary” states can he win on Super Tuesday, March 1?

But Cruz also faces a longer-term, potentially more devastating math problem that has received less attention: The states that are his most natural fits — those with the highest proportions of evangelical voters — are also the least likely to award their delegates on a winner-take-all basis. In other words, Cruz’s votes may not translate into delegates nearly as efficiently as his rivals’.

Effectively, while Cruz may be doing relatively well in the polls nationally, he's only drawing on the support of a certain chunk of the electorate. Those people (primarily evangelicals) are congregated in states that will award someone who wins 55% of the vote 55% of the delegates. So, if the state has 50 delegates to award, Cruz could pick up 27 of them, and the other 23 would be split between Trump and Rubio.

Conversely, in many of the states that happen to have less evangelicals (and/or Cruz supporters), delegates are usually awarded winner-take-all. So if Cruz comes in second (as he effectively tied for in South Carolina), he gets 0.

In addition to that, South Carolina was a very bad sign for Cruz. It was a state that was very demographically favorable to him, and yet he effectively tied for second, significantly behind Trump. If there were signs that supporters of other candidates who are dropping out of the race would go to Cruz, then he might be able to turn things around. But in general, they're not.

Cruz's likely victories will net him less delegates than his opponents will get when Cruz looses... and he didn't do well even in a state where things were favorable for him.

Not the answer you're looking for? Browse other questions tagged united-states polling president republican-party primaries .

6
Was Ted Cruz the only 2016 Republican candidate who's completely against government subsidies for private companies?
3
Is preferred candidate polling useful in predicting the likelihood of a candidate winning the primaries?
6
Can Ted Cruz and John Kasich still win delegates in upcoming state primaries?
3
Why are (public) political polls typically allowed even very close to the elections despite of their apparent disruptive effect on voters perception?
55
Why do candidates not quit if they no longer have a realistic chance to win in the 2020 US presidents election
11
Why are Democrats favoring unusually old presidential candidates lately?
7
Where did the Clinton presidential campaign overemphasise and neglect in 2016?
8
How are Presidential candidates, who run for the party ticket in Primaries and Caucuses, shortlisted?
2
According to political scientists, what, if anything, are the benefits of election polling to a liberal democracy?