Has the DNC barred Sanders from contending in the 2020 Democratic primaries?

The DNC has recently approved some structural reforms, many which are suspect in several ways IMHO, but a particularly interesting one is the following (ignore the pen markings, just read the second paragraph): 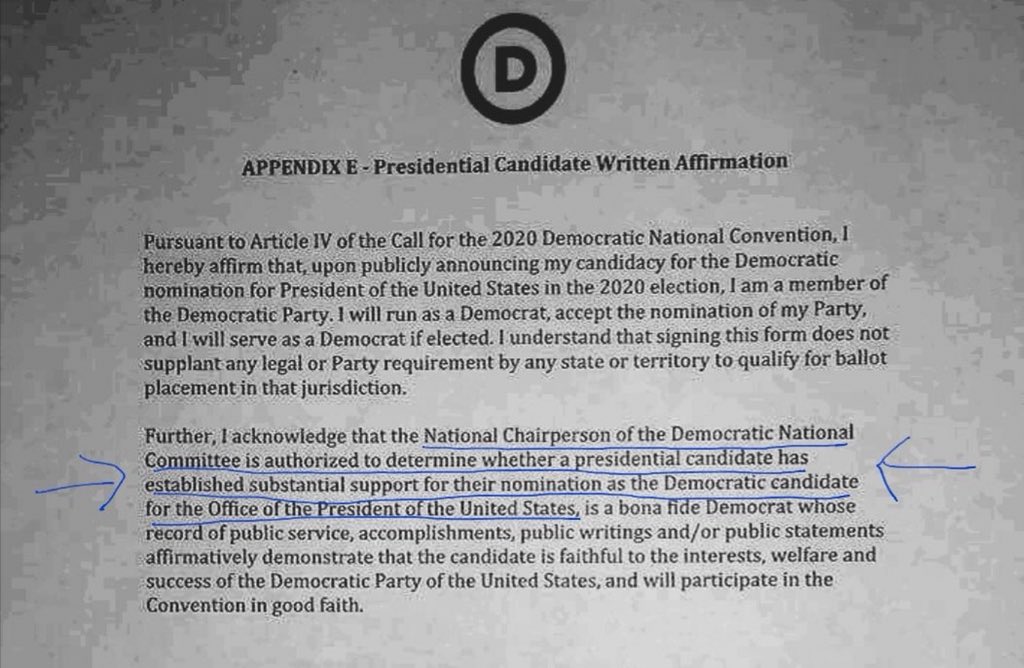 The DNC chair will now have the authority to determine whether a candidate is a "bona fide Democrat", and is faithful to the interests, welfare and success of the Democratic party.

Well, despite some actions to the contrary, US Sen. Bernard Sanders (I-Vt) is, well, an I, not a D. And he's not, to my knowledge, a member of the Democratic party of Vermont. You could discuss at length whether he does or doesn't count as a Democrat and whether he meets the criteria of that rule. But that doesn't matter, because the person who decides this is Chairperson Tom Perez, who was active in Clinton's campaign against Sanders, has purged some Sanders supporters from various DNC committees, etc. And if he wanted to, he could definitely make the argument that Sanders doesn't pass muster.

So is this the Sanders-killer rule? Or perhaps a means of pressuring him into better compliance with party dictates? Or - am I mis-interpreting things?

There is a change in process but no change in intent from the 2016 and 2012 conventions. Here is the relevant text from 2016

The term “presidential candidate” herein shall mean any person who, as determined by the National Chairperson of the Democratic National Committee, has accrued delegates in the nominating process and plans to seek the nomination, has established substantial support for his or her nomination as the Democratic candidate for the Office of the President of the United States, is a bona fide Democrat whose record of public service, accomplishment, public writings and/or public statements affirmatively demonstrates that he or she is faithful to the interests, welfare and success of the Democratic Party of the United States, and will participate in the Convention in good faith.

What has changed is that candidates have to actively affirm, in writing, that they agree to these conditions, previously it was just a rule that applied to candidates, but they didn't need to sign something that said they complied.

As such the DNC has not barred Sanders from standing for the Presidency. Sanders has previously shown that when there are requirements to affiliate with a party (such as exist to appear on the ballot for the New Hampshire Primary) he is willing to affiliate with the Democrats.

Not the answer you're looking for? Browse other questions tagged united-states democratic-party bernie-sanders procedure democratic-primary .

65
Why did the DNC try to prevent Bernie Sanders from getting the Democratic nomination?
20
How come there are so many candidates for the 2020 Democratic party presidential nomination?
0
What's the deadline for Democratic party primaries candidates for meeting the new debate criteria?
5
How does the DNC decide who they will let run?
26
Is there any rule or law stopping Bernie Sanders from running as a third party candidate?
25
Why are states easily won by Bernie Sanders in 2016 not supporting him in 2020?
1
Did Bernie Sanders receive low youth voter turnout during the Super Tuesday primaries?
0
Why do states postpone their primary elections to after June 9th, 2020 even if it violates DNC rules?
2
Did New Hampshire pick the losing Democratic candidate three times in a row from 2008 to 2020?