Does a tariff of 25% on steel imports do anything other than make steel more expensive in the US?

I understand the decision is part of the trade war against China.
And the trade war is motivated by the overall strategy of "Make America great again" and his perception that the US are treated unfairly by China. So I assume the trade war including the steel tariff aims to directly benefit the economy of the US, or force changes in trade in a short period of time to benefit the US economy.

Whatever the intention is, the resulting changes are just to complex to be all known before. It is hard to understand whether the changes are helpful in terms of reaching the intended results. But to have any vague idea of the results, knowing the economic and other tangible effects are needed as a base.

An increase by 25% in the price of a group of common materials with many uses in industry and buildings is a huge change.

What is the effect of the tariff?

The tariff makes it more expensive to import goods that fall under the tariff (steel and aluminium) into the United States from those countries to which the tariff applies (e.g. China).

The direct effect is quite clear, it is more expensive to buy goods which have a tariff on them compared to goods that do not. Even if those goods with the tariff were a bit cheaper initially, 25% may be enough to offset the difference with the same goods domestically or another country which is not affected by the tariff (because they are exempted).

In practice, this means that the goods are more expensive. If the goods would still be available on domestically or from some country that's not affected by the tariff then that country would always have been (one of) the cheapest so the imposing of tariff wouldn't make sense anyway (because the market forces buyers to buy from the cheapest source, especially when it comes to raw materials).

On the other hand, domestic and foreign producers of these goods not affected by the tariffs will benefit, after all their competition is less competitive.

To what extent specific businesses or whole industries are hurt is difficult to estimate. Many factors play a role including how competitive these industries are to begin with.

Tariffs can have some unexpected effects. PBS ran a story for example how increases in steel tariffs that were not coupled by increases in nail tariffs resulted in more nail imports and hardship for a local US nail manufacturer.

As another example, and more generally

Businesses like Detroit Bikes react to tariffs in many ways, and one of the most significant is in finding alternate sources of goods. If Pashak succeeds in finding cheaper substitute parts, he keeps costs down on his bikes, which range from about $400 to $1,250. That then blunts the overall price increase for his customers.

Economists call this "substitution," and say it affects how much consumers pay for tariffs.

"The impacts of these wars depend heavily on the substitution effect," says Amit Khandelwal, a professor of international business at Columbia University.

Other indirect effects include hardship in other sectors due to external retaliatory tariffs. The US agriculture being the prime example here, with some bailouts put in place to compensate.

Ultimately the trade war is blamed at least in part for the current global manufacturing recession/slump. The US took longer to feel that, but apparently it's hit home as well. (See also my question on econ.SE on that.)

As far as your more focused questions, US steel imports did fall some 12% in the first this year. Actually 14% including August. US steel prices have generally followed the vagaries of tariff announcements: 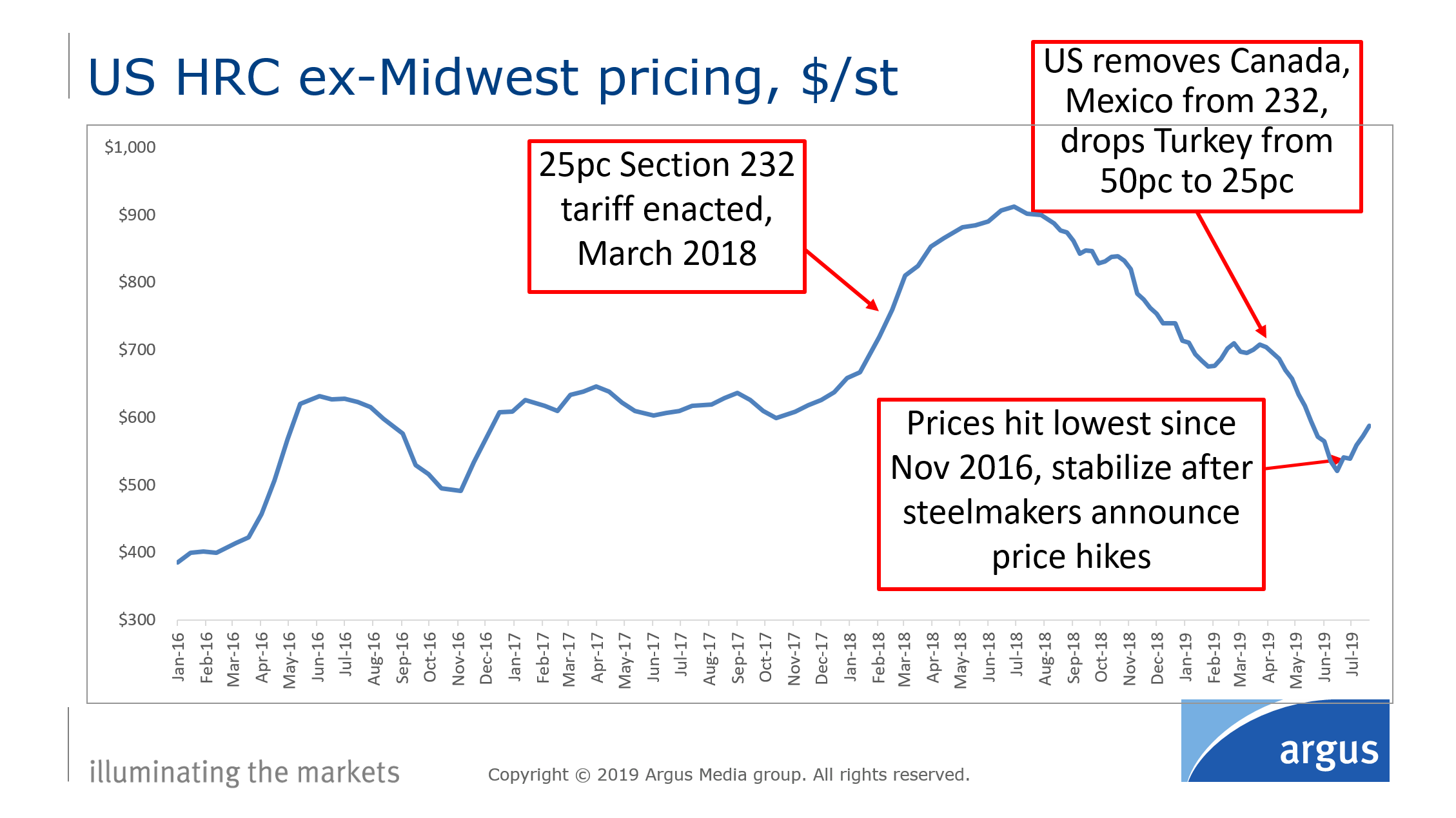 US steel production did go up to 2014 levels (previous source) after tariffs were enacted.

“These are improvements, but we’ve seen improvement of similar double-digit magnitude in the past,” John Anton, director of steel analytics at IHS Markit, told us in citing monthly year-over-year production increases, from a high of 9.1% in January to a low of 3.1% in June. “We’ve also seen deep cuts” in production in the past, he added. “But production is up.” [...]

Even the fairly conservative, but free-trade leaning American Enterprise Institute ran this story:

That’s the cost to US consumers of Tariff Man’s steel tariffs as calculated by the Peterson Institute for International Economics and reported by the Washington Post “Trump’s steel tariffs cost U.S. consumers $900,000 for every job created, experts say“:

[...] The cost is more than 13 times the typical salary of a steelworker, according to Labor Department data, and it is similar to other economists’ estimates that Trump’s tariffs on washing machines are costing consumers $815,000 per job created.

Trump has [falsely] claimed that other countries are paying the tariff bill, but evidence shows the tariffs are taxes paid by Americans. U.S. companies that buy metals are either absorbing higher costs or passing them along to consumers. General Motors and Ford said Trump’s tariffs have cost them $1 billion each.

Not the answer you're looking for? Browse other questions tagged united-states donald-trump trade tariffs .

5
How big is the total bailout (“trade aid”) that Trump gave to US farmers since the trade war began?

18
Does stopping metal imports alone cover the trade deficit of the USA?
6
Is a tariff on software (or “information”) possible?
8
Is there a stated goal in the US “Trade War”?
8
When and how were the current US and EU tariffs on cars decided?
0
Is there a correlation between US oil imports and the US-Saudi Arabia arms deal?
12
How does the EU Emissions Trading Scheme account for increased emissions outside the EU?
2
Are Common External Tariff levels in the EU agreed via qualified majority voting or unanimity?
3
Why did the UK not trade more with countries outside the EU?