In the U.S., are people with more education more likely to vote liberal?

In the U.S., are people with more education more likely to vote liberal and progressive, or is this merely a perception? If yes, is this true in general, or only for certain disciplines? Are there any studies investigating the causes?

I do have my own personal theory as to the causes, but that one is entirely subjective and not backed up by any evidence

If by liberal and progressive you imply in the use that they tend to vote Democrat, the answer should be yes, but not by as large a margin as is usually implied/guessed.

As an example we can take the exit polls from the 2012 presidential race, we see that while Obama won in most of the educational categories (look at the NYTimes) he did win by significantly higher margins in the postgraduate part of the population (+13 percentage points), lost college graduates by 4%, and won people with some college by 1%.

The same holds true for the Senate races where the Democrats control "safely" the potsgraduates.

Or you can look at a typical red state (Texas) where the only group democrats carried consistently are postgraduates.

In general, this is the recent trend, with the tipping point somewhere between 1996 and the year 2000. Some of this transition reflects the ongoing process of Democrats and Republicans trading places as the liberal and conservative parties respectively, called realignment, that started around 1965 and has now largely run its course. See, for example, these charts: 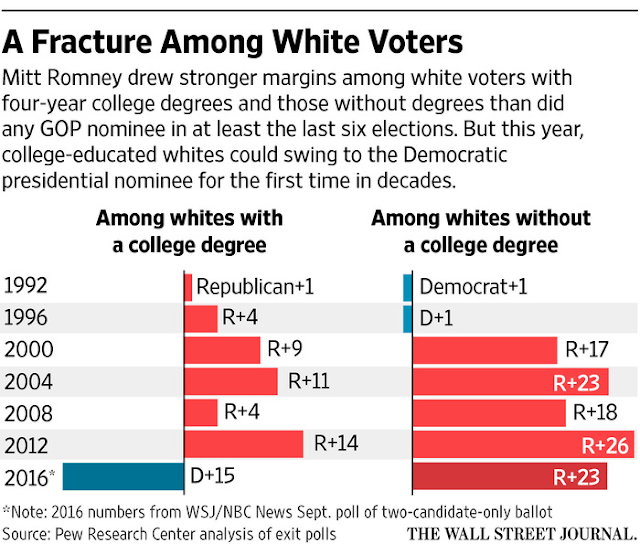 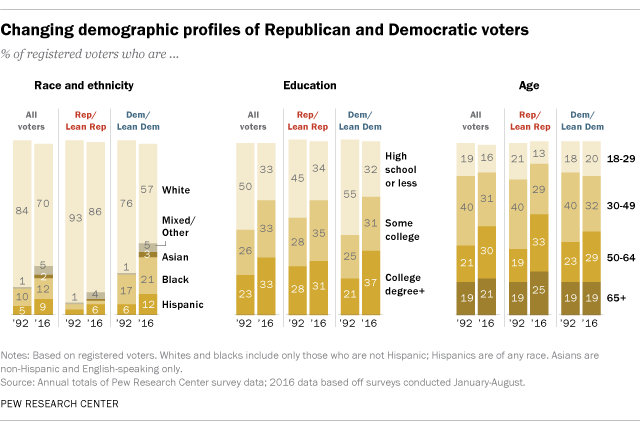 If yes, is this true in general, or only for certain disciplines?

The class of people with higher education is heterogenous politically in a manner heavily influenced by industry and occupation as illustrated by the chart below using data from 2000 through 2012 but which probably remains true on a relative basis even though there is an overall shift to the left among more educated Americans: 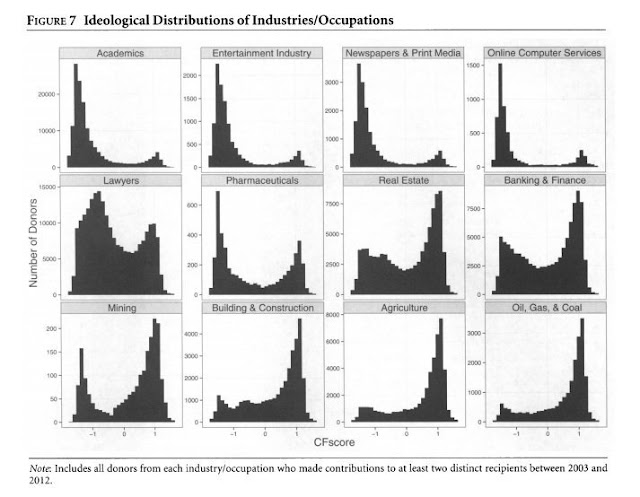 No professions or industries are consistently moderate, but lawyers, pharma, real estate, finance and non-fossil fuel mining are bimodal.

In pharma and non-fossil fuel mining, this is largely a reflection of left leaning scientific and technical workers v. right leaning corporate side executives.

Among people in business, middle to upper management and professional employees in big business (who aren't actually top management) tend to be to the left of owners and top level managers of small businesses. 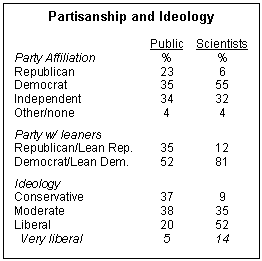 Among clergy, political leanings track denominations which very widely in their overall political tendencies. For example, mainline religious denomination clergy tend to be well to the left of clergy in predominantly white Evangelical Christian denominations.

Trends associated with gender, age, nativity (i.e. foreign born or not), race, ethnicity, religion, and geography, however, are comparable in magnitude to education and occupation.

Are there any studies investigating the causes?

Yes. But the answer to this subquestion is too long for me to provide with proper citations right now, and it can't be reduced to a pithy sentence or two without capturing some complex reasons related to history and intersectionality in addition to a few general trend rules and shifts in political party coalitions.

One starts from that foundation and then explores why exceptions have emerged in the U.S. historically from this general trend (e.g. why African-Americans in the U.S. have tended to be both politically liberal and religious relative to the general public, despite comparatively high levels of economic scarcity relative to the U.S. population as a whole, and why the white working class in the U.S. was once much more liberal than it is now when it has reverted to the cross-cultural long term norm).

In a nutshell, African-Americans (and non-Christians who would otherwise be inclined to be conservative) have leaned left because existential survival issues at the fate of conservatives who have demonized them has been more important for them.

American working class whites veered left from the end of World War II through the early 1970s, due to unprecedented prosperity and economic security, and a strong union movement, in this time period that steadily deteriorated with offshoring and automation, and with the post-World War II recovery of markets that the U.S. which was spared most of the devastation of World War II supplied upon they could meet their own needs again creating a thriving demand for exports in this time period. This situation has kept getting worse and come to a breaking point that has particularly pushed white working class men in the direction of extreme conservatism and has also mostly stripped them of their links to the union movement.

The rise of public sector unionization has also impacted the shift of educated people to the left. Unionization has thrived in the public sector, which has also grown steadily in share of employment, because it hasn't been subject to the same intense offshoring and automation pressures, and the shrinking of export markets, that the private sector has seen, and tends to require well educated employees.

Yes, but it is a recent change in the making. 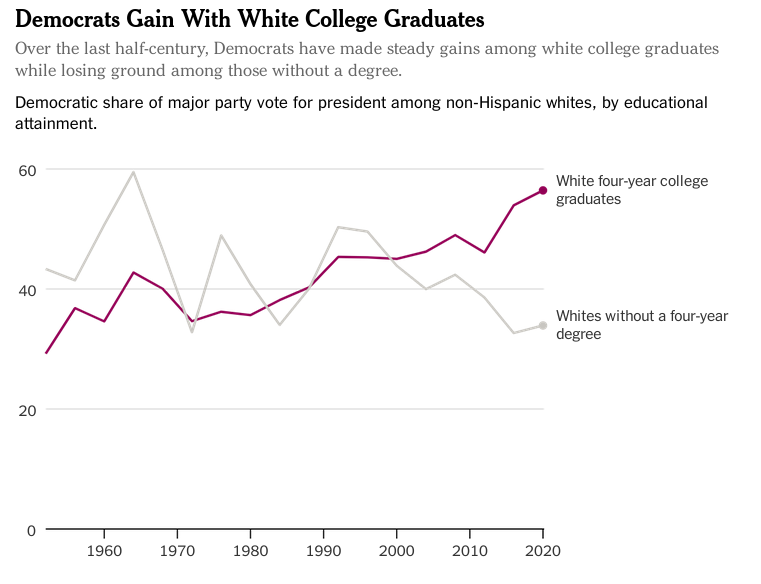 In the past, highly educated people in the US and elsewhere tended to vote for conservative parties at a higher rate than the general population. The answer above is talking about 2012. I'm honestly surprised at how old this answer was.

However, a long running trend was the reversal of this pattern. Joe Biden's strength (or rather Donald Trump's weakness) in suburbs gave him roughly 60% of the vote among Americans who had a 4 year college education. The main cause of this trend is ideological polarization, which means that political party becomes essentially equivalent to ideology.

Another manifestation of this trend is that the support of left wing parties (not just in the US but around the world) is crumbling among the blue collar less strongly educated working class in part because these communities are often socially conservative. We could see examples of voters who supported Democrats despite strong conservative and religious fundamentalist attitudes.

The question said are they more likely to vote liberal. But the article says "The Democratic advantage among college graduates may be a new phenomenon, but the relative liberalism of college graduates is not. College graduates have been far likelier than voters without a college degree to self-identify as liberal for decades, even when they were likelier to vote Republican."

Not the answer you're looking for? Browse other questions tagged united-states education .

0
What evidence is there to suggest that higher-educated people vote left-wing?
12
Why is there a strong link between education and voting Remain?
4
Are people in hard science major more likely to be conservative rather than liberal?
1
Where can I find a chart of education level by political party?

13
Does association of age to political party imply changing of political affiliation as one ages?
4
Why are Democrats more likely to vote by mail than Republicans?
4
Is there independent scientific studies as to rather liberals or conservatives are more likely to believe in conspiracy theories?
0
Are cities with nonpartisan mayoral elections more likely to elect Republican mayors?