Why does the government not introduce an amendment to the constitution to allow abortion?

Since the polls clearly show that the majority of the American people disagree with the Supreme Courts decision to overturn Roe vs. Wade, why does the US government not introduce an amendment to the constitution to allow abortion?

Because it likely wouldn't get passed.

In order for a Constitutional amendment to be passed, it currently needs 38 state legislatures to support it. For practical purposes, it also needs supermajorities in both houses of Congress. There are 22 states that are going to ban (or already have banned) abortion. That only leaves 28 states that could possibly be willing to vote for such an amendment, which is not enough to pass it, and some of those are likely to join the list of those banning it over the next few months.

Given that neither party has a 2/3 supermajority in either house, there isn't even the political power available to get such an amendment proposed. And since no one has a supermajority in the Senate, neither side can even get an ordinary law on this topic passed, let alone an amendment.

Because the hurdle for amendments is, by design, too high to allow a change that does not have broad enough state-by-state support (no, a national-level majority does not apply here).

The Constitution | The White House

The founders also specified a process by which the Constitution may be amended, and since its ratification, the Constitution has been amended 27 times. In order to prevent arbitrary changes, the process for making amendments is quite onerous. An amendment may be proposed by a two-thirds vote of both Houses of Congress, or, if two-thirds of the States request one, by a convention called for that purpose. The amendment must then be ratified by three-fourths of the State legislatures, or three-fourths of conventions called in each State for ratification.

Both the proposal and the ratification phase do not seem to have the political support to pass this amendment. Remember that a number of states have congress people that explicitly want to limit this right, not enshrine it in constitutional law. And that a number of states, 13 in fact, making it more than the quarter needed to block ratification, have already passed anticipatory laws making abortion illegal as soon as they SCOTUS overthrows Roe vs Wade. As it just has.

Nor is it obvious that the people, in a sufficient number of states are strongly supportive of abortion to push a change to their representatives, at the present time.

There are a couple of reasons here. The other answers correctly address the issue that this would have no chance of getting 3/4 of states to ratify it, or of getting 2/3 of Congress to even propose it as an amendment. Neither an abortion ban nor an absolute Constitutional right to abortion would have anywhere near the support required for such an amendment in the present environment. Constitutional amendments are intentionally designed to require exceptionally broad support across the country in order to be approved.

The other issue, though, is that your premise about the polling is not really correct. Gallop has conducted annual polls on the abortion issue ever since the mid 1970s, shortly after the Roe decision. There has not been a single year since polling started where support for abortion being legal for any reason was more than 35% with the number spending much of that time in the low-to-mid 20s. The majority viewpoint has consistently been that abortion should be allowed under some circumstances, but not under others, which was not the case under the Roe and Casey decisions that were overturned. 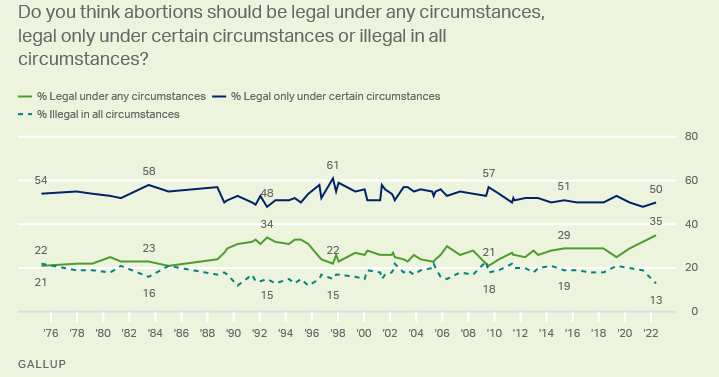 The sudden change in the 2022 data seems likely to be related to the fact that the polling in 2022 (by pure coincidence) occurred in the immediate aftermath of the leaking of the Dobbs decision, with polling occurring May 2-22 (roughly the same time frame of polling each year.) However, even so, the percentage of Americans supporting the legality of abortion for any reason only very slightly exceeded 1 out of 3.

It's actually reasonably likely that a Constitutional amendment to protect a right to abortion under circumstances such as significant health risks to the mother or cases of rape/incest could pass, as there is actually rather broad consensus there. In the same polls mentioned above, the percentage of people who believe abortion should be banned under all circumstances has rarely exceeded 20% and, when asked specifically about cases where the mother's health was endangered, were even significantly lower than that. However, such an amendment wouldn't extend as far as the left wants and its effect would be relatively small anyway, since most states with abortion restrictions already include exceptions for such cases. Such cases also represent a tiny minority of abortions in the U.S. According to a study conducted in 2004 by the pro-choice Guttmacher Institute, 4% of abortions were primarily due to health concerns of the mother and less than half a percent primarily due to the pregnancy being the result of rape or incest.

I feel like this is missing a big part of the point of this whole bruhaha.

This is about abortion for sure, but it's also about a broader issue. The common refrain among rural Americans is something Washington elites don't share our values/represent us well. The entire Roe vs Wade thing for them was essentially an end-run around the democratic process since it was unlikely to pass as legislation (it can't even now, much less 50 years ago). Similar to the complaints liberals have when the conservatives, say, involve us in a decade-long unpopular and unjustified war. Nobody in a democracy likes having their viewpoint squashed by fiat (executive or judicial).

This is not to say that people don't have strong feelings on the issue at hand, but it isn't just about abortion: it's about representation. There are also echos of the states rights vs federalism debate which has never really died out even after federalism decisively won the American Civil War.

Not the answer you're looking for? Browse other questions tagged united-states constitution supreme-court abortion amendment .

21
Can an 11% minority actually pass a Constitutional amendment?

20
Why doesn't a conservative majority SCOTUS repeal Roe v. Wade?
18
Does substantive due process apply to the Second Amendment?
4
If a law is found to be unconstitutional; can an amendment to the state constitution matter?
13
How do "originalist" interpreters of the constitution cope with the 2nd amendment?
43
Does the Constitution allow a woman to be President of the United States?
8
Does Amy Coney Barrett’s record suggest she would vote to overturn Obergefell v. Hodges?
18
On what basis could the US federal government codify Roe v. Wade?