What evidence is there that the Assad regime was responsible for the chemical attack in April 2017?

What intelligence / information has been released so far that supports the hypothesis that the chemical attack was conducted by the Syrian government?

Isn't it a very complex scenario with many rebel groups and ISIS all in a power struggle? Wouldn't there be other organisations besides Assad's regime that may benefit from a chemical strike, especially if it provokes American intervention?

Survivors of the attack claim that bombs delivered the chemicals and the Pentagon released a map tracking the flight of a plane it says dropped those bombs. 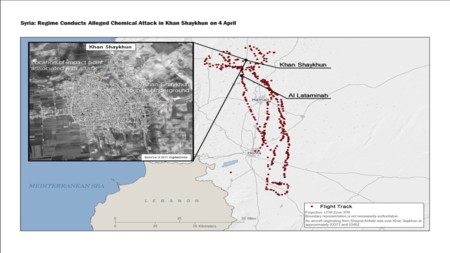 The flight path shows the plane taking off from Shayrat, one of Assad's military airfields, and flying over Khan Sheikhoun the same day the attacks occurred.

The Organisation for the Prohibition of Chemical Weaponshad's Fact-Finding Mission established the use of Sarin Gas in a report (PDF) released on 2017, June 29.

THE HAGUE, Netherlands — 30 June 2017 — In a report released by the Organisation for the Prohibition of Chemical Weapons (OPCW), the OPCW Fact-Finding Mission (FFM) confirmed that people were exposed to sarin, a chemical weapon, on 4 April 2017 in the Khan Shaykhun area, Idlib Province in the Syrian Arab Republic.

OPCW and the United Nations have formed a Joint Investigation Mechanism to investigate allegations of chemical attacks in Syria, and in particular the case of the attacks on Khan Sheikhoun. It has been mandated to establish the responsibilities for this event.

The report (extracts / PDF), released on 26 october 2017, concluded that a Syrian Arab Air Force aircraft was responsible for dropping the sarin during the attack.

The report documents why (one of) the explanation offered by Russia (a bomb strike on a sarin stocking site) is implausible : the nerve agent would then have been burnt and buried and not released in such huge quantities in the air. It also studies the hypothesis of an artisanal ground bomb releasing sarin gas, and dismisses it.

It concludes that a Syrian Soukhoï-22 attacked at 6:45 am, dropping first three conventional bombs and then one chemical bomb.

Evidence collected includes satellite images, interviews with witnesses and victims, communications from fighters, photos and videos including some images of bombs remnants, and analysis of samples.

There has been no evidence presented whatsoever. Russia, U.K and Germany has called for an investigation but U.S has shown no interest so far.

It is unlikely that Assad is behind the chemical attack for two reasons:

Not the answer you're looking for? Browse other questions tagged syria chemical-weapons .

21
Legality of Syrian invasion by US and allies
12
Why does Russia need to win Aleppo for the Assad regime before they can withdraw?
13
What could the United Nations do after a chemical attack in Syria?
10
Has the Pentagon provided evidence for their accusations against Assad's potential preparations for another chemical weapons attack?
31
Are there any facts according to which the Russian government is responsible for the chemical attack in Great Britain?
3
Does Russia's veto at the UN Security Council end any role for the United Nations in investigating the alleged chemical weapons attack in Syria?
3
Has the OPCW submitted its report relevant to the alleged April 7, 2018 chemical weapon attack in Douma to the organisation's member states?