What happens to a President's reelection funds if they don't complete their first term?

Trump's 2020 re-election campaign recently filed their required FEC statements, showing they had raised $13.2 million so far. It's safe to assume at this time that Trump does, in fact, intend on running for a second term, like almost every other first-term President has. It's way too soon to tell if he will have a serious primary challenge (unlike most incumbent Presidents), but even if he does, he can clearly spend these campaign funds on that election.

However, what happens if Trump can't run for a second term? What happens to his campaign funds if he is impeached (and actually removed), resigns, or dies in office?

These uses, as well as prohibited uses, begin on page 58 of this FEC collection of election law.

The explanation of 170(c) organizations can be found on page 1, part B of this IRS document.

The funds can go towards the Republican National Committee for other elections, such as Senate and House.

One such fund is a joint fundraising effort as seen at the footer of Trump's online shop: 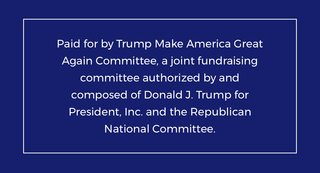 1
One of the candidates for state legislature suspended their campaign. What happens if they win?
60
Why don't US presidents run in other elections after their term ends?
5
In U.S. , what happens when a party doesn't endorse first-term president as nominee in the next election?
32
Why did people still chant "Lock her up" at Trump rallies in 2019?
5
Have Republicans or others elaborated concretely why (some) election security bills would be partisan?
8
What happens to the physical votes after an election is complete and certified in the US?
8
Debate-related statement GOP says every US Republican presidential candidate must sign; what does it say & what happens if they don't sign or comply?
21
Why would a former US president's announcement of a reelection bid cut off legal defense funds?