Can a super PAC give to both democrats and republicans?

I created a visualization using Federal Election Commission data. Here are the top five super PACs who contributed the most during 2011~2012. The super PACs are: Restore Our Future, Republican National Committee, Priorities USA Action, DNC Service Corporation, and Winning Our Future. The height of the bar shows the total contribution (in terms of dollars) made by a super PAC. The blue part of a bar denotes contribution made to a democrat candidate. The red part of a bar denotes a super PAC's contribution to a republican candidate. Now, I was surprised to see that both Restore Our Future and Republican National Committee contributed to both democrats and republicans. Is my visualization wrong or is there some stories here I didn't know? 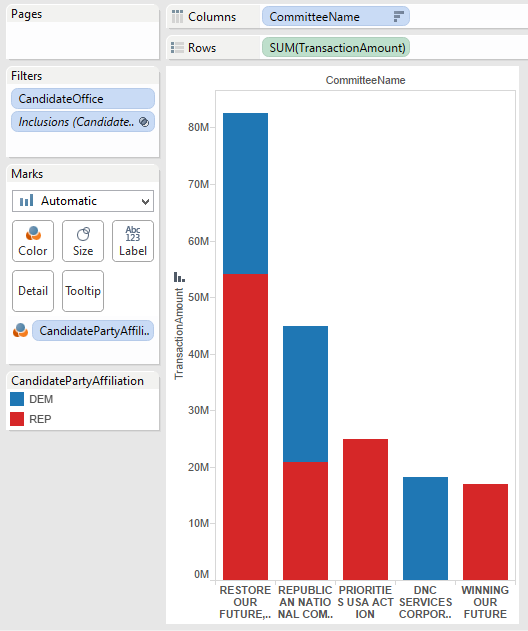 I'm pretty sure you have a flaw in your data. This is what I get when I search for "Restore our Future" on this page:

To me, that looks like you're failing to account for the "Oppose" value in the "Support/Oppose" column. They spent millions on opposing Obama, but that still counts as spending money on him for filing purposes. You can't just flip the result, though, because slightly further down they have spending against the Republican Newt Gingrich. Better to break the data down into the four combinations:

As to the title question of whether a Super PAC can give to both sides, there is nothing to prevent them from doing so. The only restriction on how Super PACs spend their money is that they may only make Independent Expenditures:

An independent expenditure, in elections in the United States, is a political campaign communication that expressly advocates the election or defeat of a clearly identified candidate that is not made in cooperation, consultation or concert with or at the request or suggestion of a candidate, candidate’s authorized committee or a political party.

Additionally, these Independent Expenditures can't be contributions directly to a candidate. (Further reading) (I assume in your question when you say contribution you actually mean expenditure on behalf of, since direct contributions aren't allowed.)

It's called "hedging your bets" and is a common strategy amongst issue-related PACs.

Imagine, for example, if you are the NRA. You care about about guns, not parties.

Not the answer you're looking for? Browse other questions tagged election campaigning .

2
In the US, is the ban on coordination between Super PACs and candidates effective?
3
How are political staff (both congressional and campaign) paid in the US?
9
How easy is it to implement a National Sunday Law?
11
How could an alliance between the Green Party, Liberal-Democrats and Labour Party be formed?
5
Can non-US citizens join super-PACs or pay for attack ads in the US?
2
Do Republicans spend more on advertising while Democrats do more canvassing?
15
Can both US Senators from a state be elected at the same time?
2
Can the president or the Congress pass a law to dismantle the super-delegate system used by the DNC?