Why did Israel vote against lifting the American embargo on Cuba? 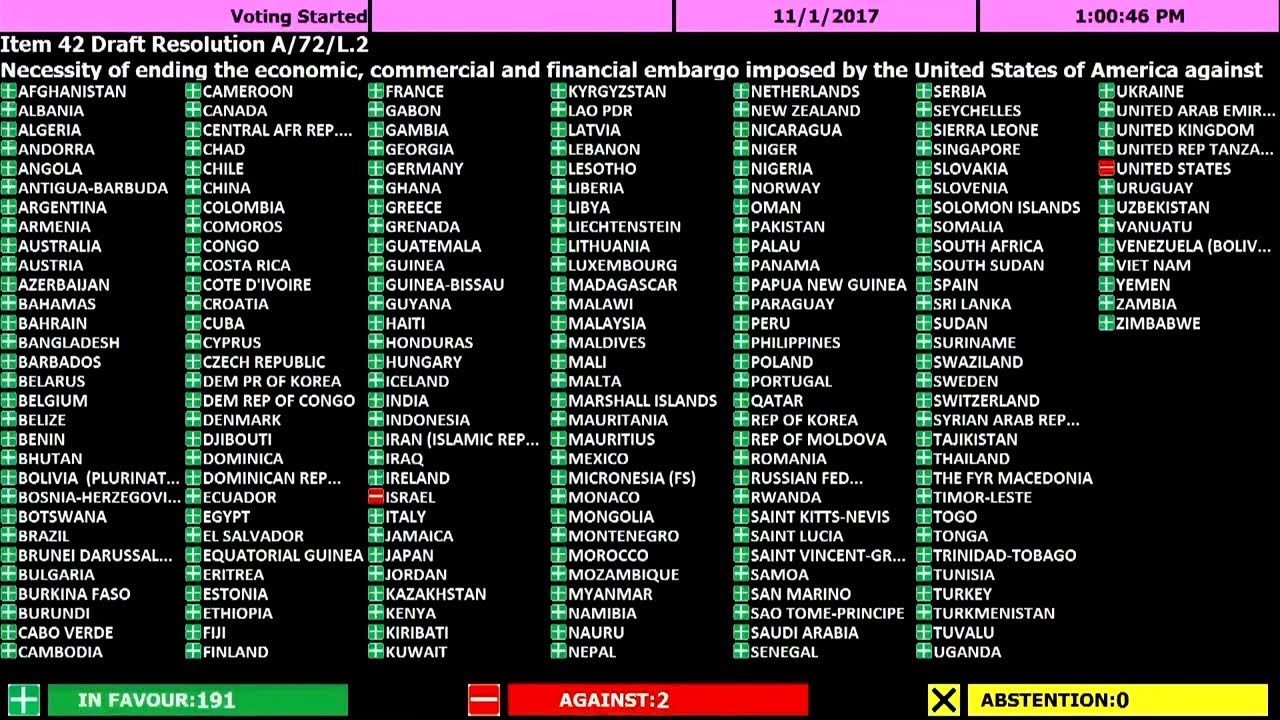 My question is, why Israel? Many of the nations on this list are allies of the US, but why does only Israel support the embargo? What does Israel hope to get from this?

Many countries consider themselves allies of the US, but few take foreign policy stances just because the US says so. (The US also does not always vote the same way as its allies.) The vast majority of the world consider the US embargo to be an act of revenge driven by the interests of Cuban Americans, and others who had property confiscated at the time of the revolution, and consider it completely unjustified as a matter of foreign policy, so they vote against it.

Israel as a country is absolutely indebted to the US. The US is virtually the only country not condemning at least some of its actions in Palestine, and continuing to supply it with extensive military and civil aid without conditions. Without continued support from the US Israel (or at least its present policies) would be in severe trouble.

Israel therefore, when asked to take an action that doesn't really inconvenience it much, votes with the United States. It isn't in a position to disagree with the US on foreign policy.

I'm not even sure in what year that vote you mention was taken, because it's a UN tradition by now

The UN General Assembly has, since 1992, passed a resolution every year condemning the ongoing impact of the embargo and declaring it in violation of the Charter of the United Nations and of international law. In 2014, out of the 193-nation assembly, 188 countries voted for the nonbinding resolution, the United States and Israel voted against and the Pacific Island nations Palau, Marshall Islands and Micronesia abstained.

Israel has also been on the receiving end of numerous resolutions at the UN. In the Security Council, the US has vetoed numerous such resolutions.

It's not surprising to see Israel reciprocate how it can on an issue the US cares about.

Other answers focus on the US-Israeli relationship, but there is also no love lost between Cuba and Israel. Cuba sent troops to fight Israel in the Yom Kippur War after breaking relations the previous month; neither side chose to restore formal relations. Cuba continued supporting Palestinian guerrillas (like the PLO) until the collapse of the Soviet bloc.

One source, though it's readily found with Google.

Not the answer you're looking for? Browse other questions tagged united-states united-nations israel cuba .

8
Which country benefited the most from UN Security Council vetoes?

7
Guantanamo prison and relationship between the USA and Cuba
13
Does the "average American" know that the embargo on Cuba is unpopular around the world?
0
Why did Israel prefer to finance kibbutzim using banks instead of subsidies or other forms of support?
4
What does the US have to gain if more nations establish their relations with Israel?
47
Why does the US block a UN statement calling for violence to stop in the Palestine-Israel conflict?
9
Has the Biden administration communicated its reasoning for maintaining the embargo against Cuba?
1
Why is the US embargo such a problem for Cuba?
10
Why are the Taliban unwilling to establish a diplomatic relationship with Israel?